The Giant’s Causeway is on every visitor’s must see list on the island of Ireland. For lots of different reasons. It’s a beautiful place on a beautiful coast, It has mystery and mystique. It is intriguing and enigmatic. That’s why over a million people a year visit.

It is located in Northern Ireland in a part of Antrim known as The Causeway Coast.  I have been there twice in the past year – in January 2017 in the depth of winter and in September. Both times I was gifted with marvellous weather.

For me as a geologist it was like worshipping at a holy shrine. So I thought I would put together a few of my observations from the two trips.  Apologies if this is too dry for you but you can skip the words and just look at the pictures.

So what are we talking about here?

The Causeway is part of an extensive coastline exposing thick basalt flows.  The scenery is nothing short of spectacular with sweeping bays and jagged cliffs stretching as far as the eye can see.

The Causeway Coast looking west with Giant’s Causeway in the foreground. 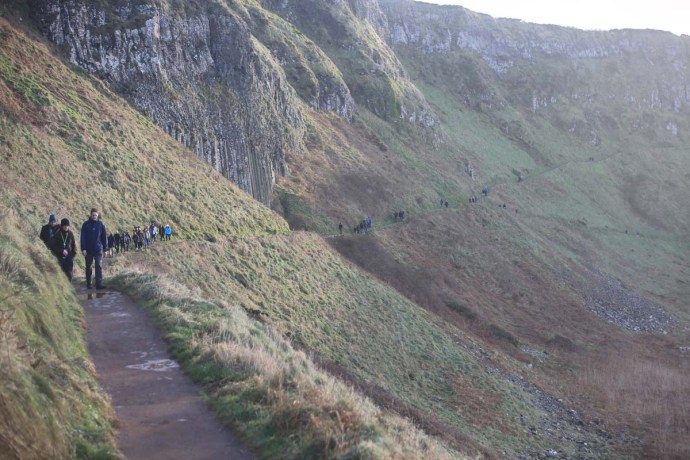 View west showing Causeway and Chimney Tops in the distance. 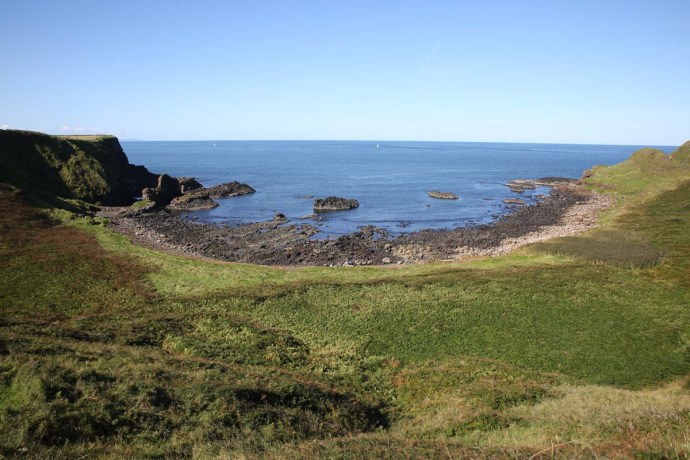 Giant’s Causeway is on the right and the Camel Rock on the left.

The Giant’s Causeway is most famous for the spectacular columns, or more correctly ‘columnar jointing’ in the basalt. The origin of the columns has historically caused all sorts of consternation. Our forebears did not believe such regular shapes could be created naturally. So if it wasn’t the work of the Almighty then it must have been Finn McCool. Hence the legend of the Irish Giant constructing the causeway to engage with his counterpart in Scotland, Fin Gall.

View from the clifftop down onto the Causeway. 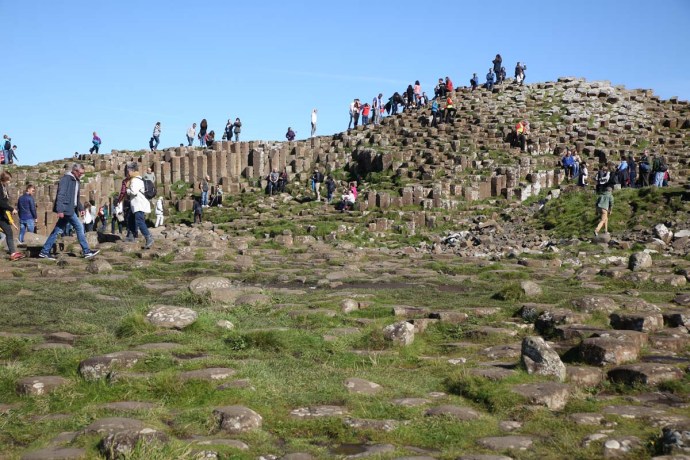 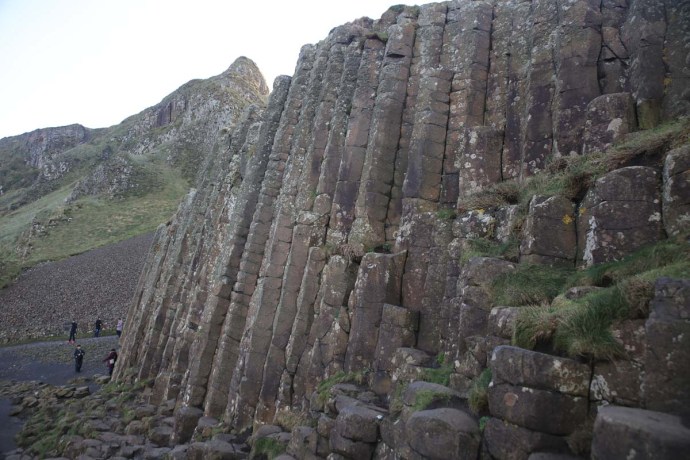 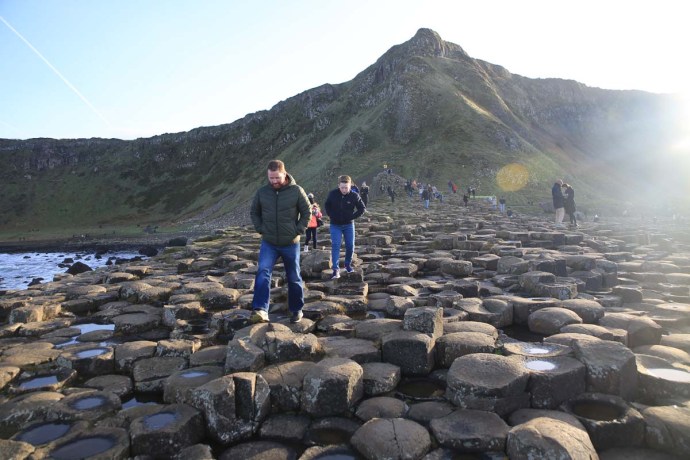 And he left evidence didn’t he? In his haste to get back to Ireland and escape from his giant nemesis, Finn McCool lost a boot which remains to this day adjacent to the Causeway. There is a more prosaic explanation and I’ll return to this later. 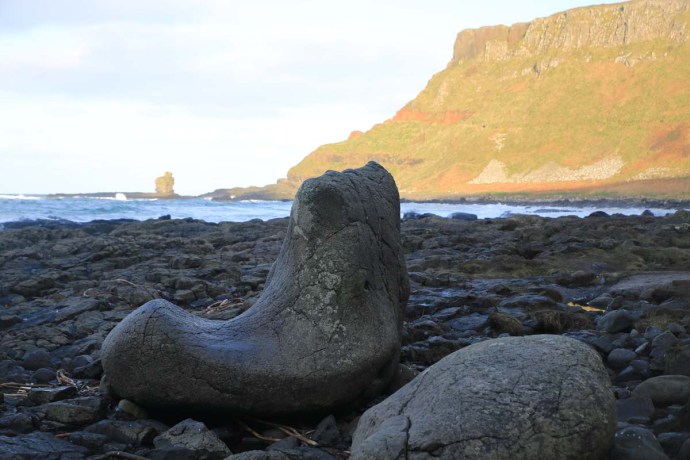 The Causeway came to the attention of Science however in the late 17th century and right through the 18th century it was the focus of intense debate as to its origin. Geological science was then in its infancy. Two intensely opposed schools of thought developed. The Vulcanists, who believed the columns were basalt solidified from lava and the Neptunists who said that all rocks including basalt were sedimentary and formed in a great ocean. The Giants Causeway was at the centre of this debate. So it is one of the most significant places in the history of the geological sciences. That debate has long since been resolved in favour of the Vulcanists

We now know, however, that the columns are caused by cooling cracks that developed at the bottom of a lava flow where it was in contact with the cooler rock beneath. As the lava continued to cool these cracks slowly propagated up creating regular, generally six-sided (though they can have from three to seven sides), columns. These regular columns are called colonnades. The hexagonal shapes are caused by the joints tending to be at 120º to each other. At the exposed tops of the flows cooling was more rapid where there was contact with air and water, so the jointing was irregular and blocky. This type of jointing is called entablature. You can see this very clearly in many places especially at the, so called, Organ Pipes 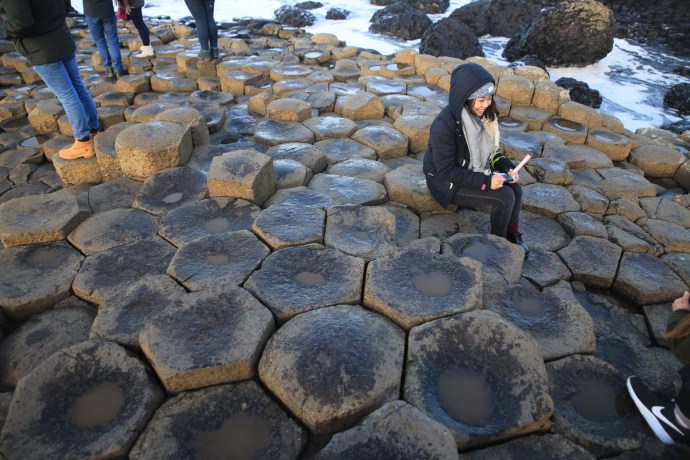 Spectacular columns at the Organ Pipes

If you look closer at the columns you will see that in addition to the regular vertical joints that create the columns there is also another set of sub horizontal joints which slices each column into regular segments. These were created by the release of stress during contraction within the columns.

The really intriguing thing is that when these columns break along thee horizontal joints to form the rock platforms they are in fact ont horizontal.  Usually they are either  beautifully concave or convex and the segments fit perfectly together in a ball and socket arrangement. The concave joints are easily spotted on the rock platform as they retain pools of water. 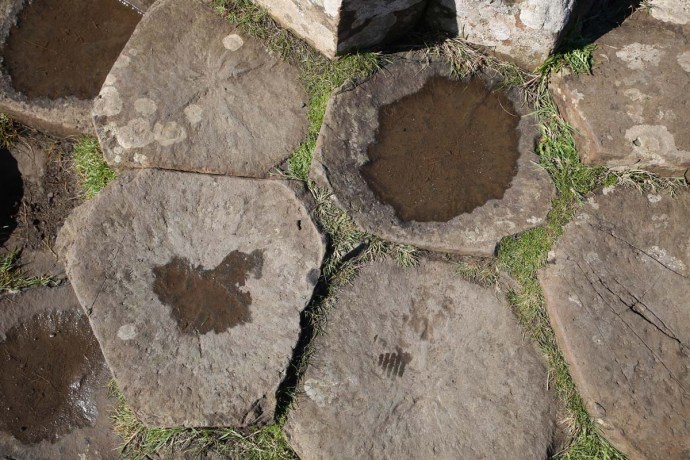 The columns make an impressive display whether on the rock platforms or in the cliffs.  There is a formation at the eastern end known as the Chimney Tops. If the illustration attached from an 1888 book is accurate, then the chimneys are considerably smaller than they were in the 19th century.   I suggest you go and see them before they disappear.

It is easy to see how the Neptunists thought the basalts were of sedimentary origin.  There is a distinct layering which could be mistaken for sedimentary banding. Of course it represents different lava flows.  particularly confusing is a distinctive orange red layer in the middle of the cliff.  It is known as an Interbasaltic Formation; a laterite horizon, and is caused by the basalts below it being exposed to weathering for a considerable time before the upper series of basalt flows were deposited. It also suggest a warmer climate at the time as laterites require tropical conditions to develop. It is composed mainly of clays and is rich in iron and aluminium (most other elements were leached out) and has been mined for these ores elsewhere in Antrim. 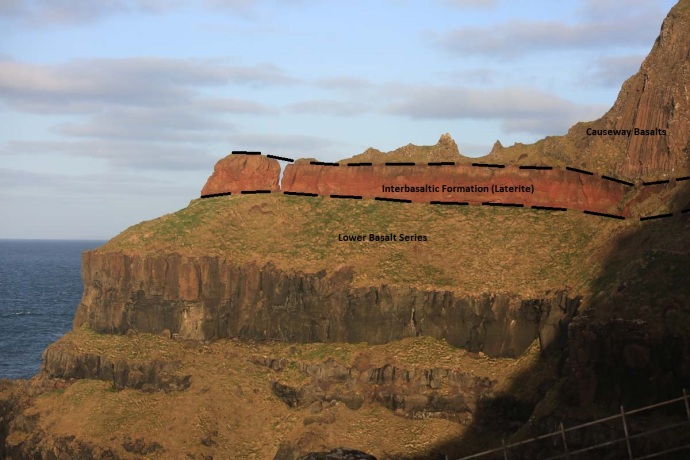 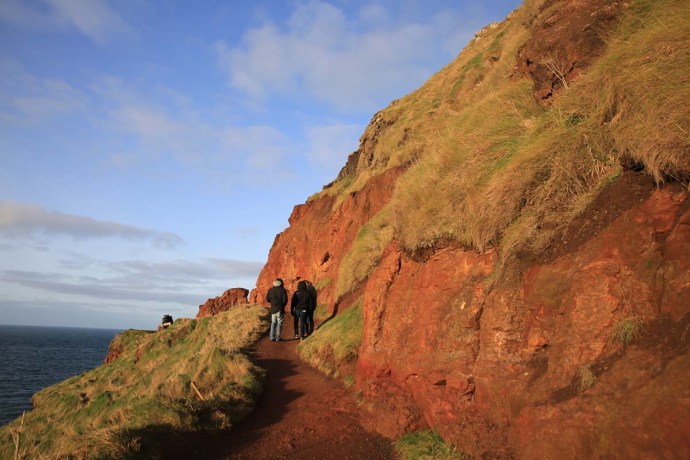 Within this laterite hori\on you can see relicts of the original basalt as paler partially weathered rock. There are also some excellent examples of preserved circular structures representing earlier spheroidal weathering within the normal basalt. This is caused by water percolating down vertical and horizontal cracks eventually creating rounded blocks. It is also known as ‘onion skin’ weathering. 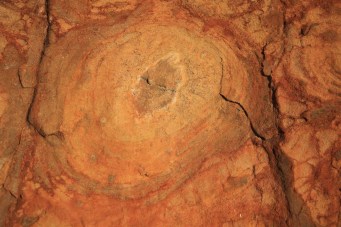 Oh I forgot.  Finn’s boot.  It’s actually a glacial erratic, deposited by a retreating glacier at the end of the last Ice Age (about 10,000 years ago). Much more boring explanation.

I know I’ve gone on about the rocks but the spirit of the place is palpable.  The only word I can think of is Romance,. 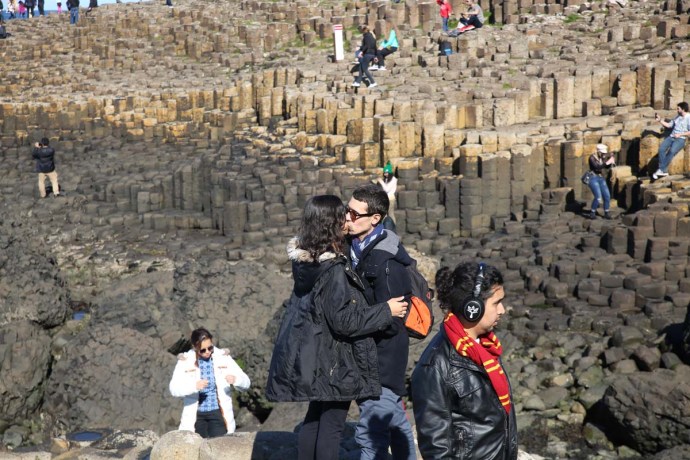 Romance and Rocks.  What a combination.