All is not what it seems. A little story from the Wild Atlantic Way on the west coast of Clare.

I live in a remarkable spot and I have written of it and photographed it many times. Point Caherush lies between Quilty and Spanish Point along the spectacular west coast of Clare.  Indeed it was spectacular before it became part of the Wild Atlantic Way but now of course it is legitimately spectacular because it has a label with the word ‘wild’ in it. Anyway I live at the end of a one kilometre long boreen known locally as the Clogher Road. My front door looks out over Quilty and Mutton Island. Here’s a reminder.

My little cottage nestled on the rocks at Pt Caherush

The rocks at my feet though are similar to the rest of the West Clare coastline from Loop Head to Doolin, and comprise shallowly dipping interbedded sandstones and shales.  For the whole time I have lived here I assumed that I was living at the edge of a wilderness (that’s the ‘wild’ in Wild Atlantic Way!). A thin strip of pristine land beyond the rolling green that is everywhere so heavily moulded by man.  I surmised, somewhat romantically, that only the hand of the sea had sculpted the shore. Despite this I was troubled by some observations I could not explain. Perfectly circular holes in the rock sometimes with radial joint patterns around them were disturbingly reminiscent of what I had seen in open cut mines. This made no sense. There was nothing to mine in these barren sandstones.

But I didn’t think of the sandstone itself. 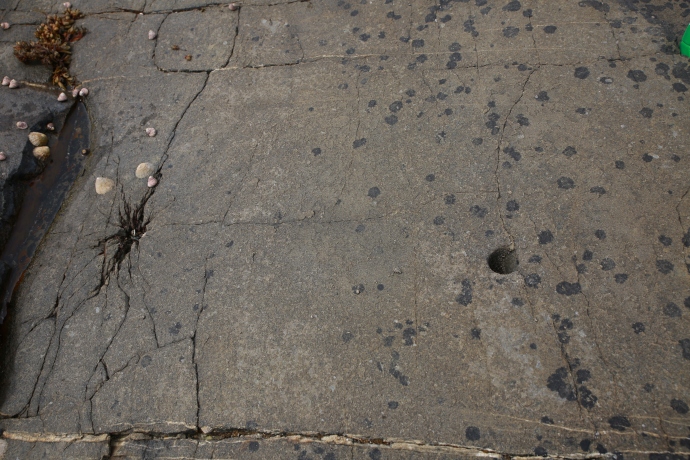 One day I was chatting to Mikey Talty, a resident of this place all his long life. I have written about that day in a previous blog, when three generations of the Talty family were harvesting kelp from the bay. Mikey is full of wonderful stories but he really got my attention when he mentioned working as a young man in the 1950s at a massive quarry operation on the Point. He showed me where the crushing plant was and described how truckloads of rock were carted away to build roads as far away as Kilrush and Kilkee. This mining it would seem had changed the shape of the headland and much of the protection of the bay was lost.

Mikey Talty talks about Caherush in his youth.

With this new knowledge I now see the evidence everywhere in my wanderings. Of course the drill holes were for the explosives, some still showing their perfect shape and probably unexploded, and others with radial shatter patterns showing they did their job. There are rock exposures that are not natural and there is angular rubble strewn, that has yet to be smoothed out by the ocean.

Blasted face at limit of quarrying 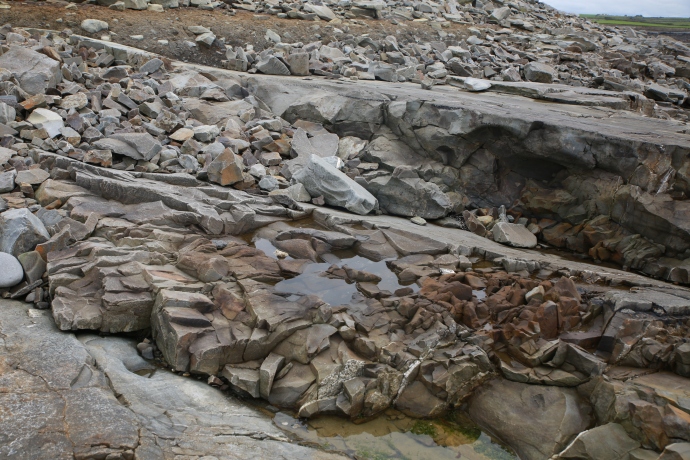 It is hard now to understand the thinking that would have led to the locating of a quarry here when there would have been plenty of locations away from the coast. I would like to think that in ‘modern’ Ireland it would be impossible to conceive of permission being obtained today for mining on the seashore. Perhaps planning approval wasn’t needed then and certainly priorities would have been different.

I can find nothing in the literature about this operation and maybe the memory of it is only now with those who lived or worked here. But the record will stay in the rocks for hundreds of years and I am sure it will confuse and intrigue future generations of geologists and non-geologists, who wander around Point Caherush, as it did me.