I have spent a lot of my time traipsing around the country exploring archaeological treasures. Ring forts, portal tombs, standing stones, castles, sile-na-gigs, you name it.   I have photographed them and blogged about them. In all that time though I completely forgot to document the archaeology of my own back yard. And I mean literally my own backyard.

In January 2014 Clare, along with much of the west coast of Ireland, was struck with a number of ferocious storm that destroyed beaches and did massive damage to seaside communities. This happened four months before I arrived but the effects can still be seen today.   Hardest hit were places like Lahinch, White Strand, Spanish Point, Quilty, Seafield Pier, Doonbeg, Kilkeee, Kilbaha and Carrigaholt.

In fact the house at Caherush, that was to become mine, was hit hard and inundated, with the then occupants having to be evacuated.

The massive high tides and waves, while doing such obvious damage also uncovered some really interesting things that were previously unknown. For example near Spiddal a ‘petrified’ forest of ancient bog oak was laid bare and, closer to home, a peat layer now covered again was exposed in the bay at Caherush.

This blog is about what was found in the backyard of my cottage after the gravel was stripped away by the waves.  Evidence of long since gone farm buildings was uncovered. A number of different types of paving in close proximity were revealed and these appear to represent the floors of old farm buildings. The site covers 10m x 4m. 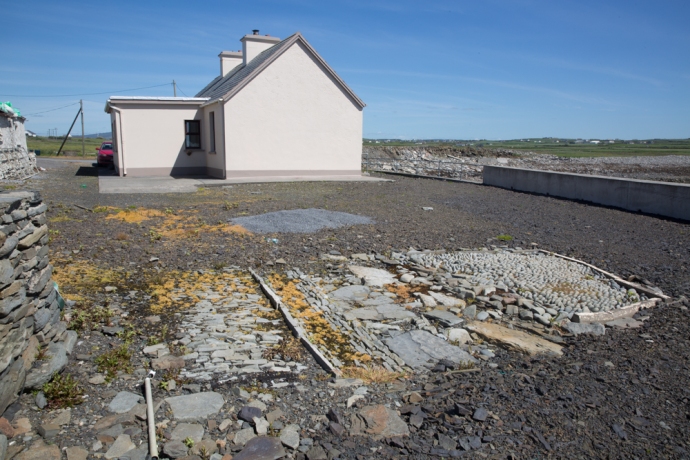 Paving of old farm buildings in the backyard of the cottage at Caherush.

There are cobblestones, setts and flagging, each belonging to a building with a different function.  The original buildings would have been aligned north south. At the southern end an area of cobblestone paving was revealed.

Cobblestone floor of an old stable.

Cobblestones are one of the earliest forms of paving, the term first being used for roadways in the 15th century in England. The use of cobbles though actually started with the Romans around 250AD. True cobblestones, are small, natural stones with edges smoothed by water, either by the ocean or rivers.  These undressed stones, or cobbles, are often of a flattened egg-shape and were used in their natural state without being worked in any way.  The stones are carefully selected and laid in sand pointy end down and were packed tightly together to provide a relatively smooth and durable surface. This construction has excellent drainage and so they were much longer lasting than the alternative of the time which was dirt. They would also have been used frequently in stables which it is believed was the case here.  A lot of thought went into selecting stones of similar size and shape and in aligning them. It is amazing that it has survived. 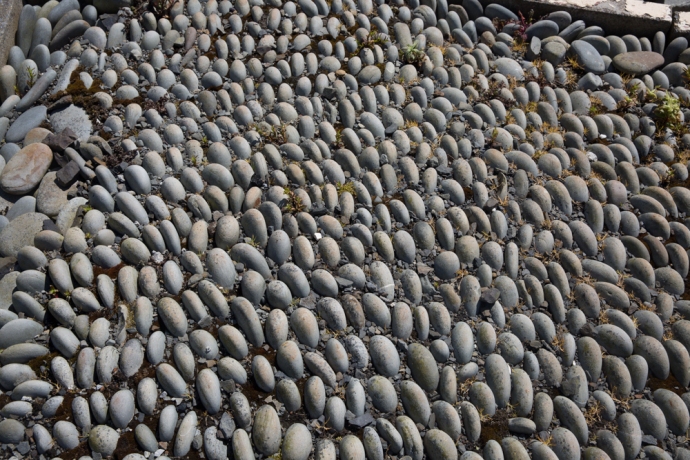 Detail view of the cobblestone paving 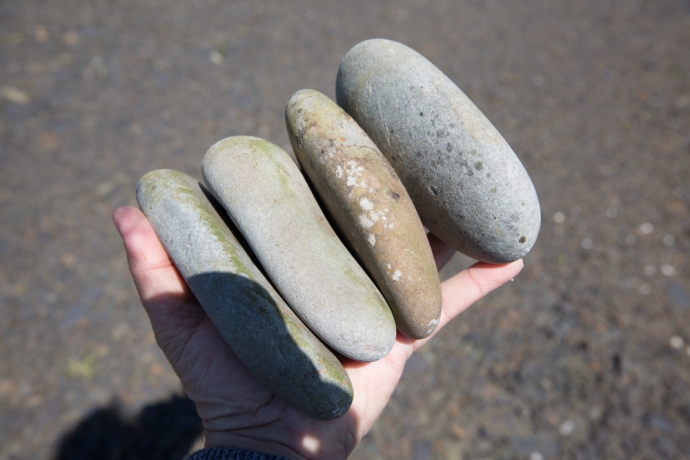 Typical cobblestones selected to be of similar shape and dimensions

Cobblestones went out of favour in the early 1700s and were replaced with setts which are worked into rectangular shapes but still laid the same way. These are actually what people would be most likely to refer to as cobblestone paving now.

So, there is no way of knowing how old this floor is as the tradition of using cobbles may have continued on farms much longer than their use in roadways, especially near the sea. But it could conceivably be pre 18th century,

Next to the cobbles is an area of large irregular slate flagging probably much more recent and representing an access way between the stable and the building to the north. Adjacent to this slate is a beautifully preserved shallow drainage trough made from sandstone setts aligned east west in the direction of drainage. Immediately north of this is a level area of setts in the same rock type and apparently of the same vintage, aligned north south. This area is believed to have housed cattle who would have stood on the level area facing north, which would have enabled the trough to catch their effluent and drain it away. Clever really. 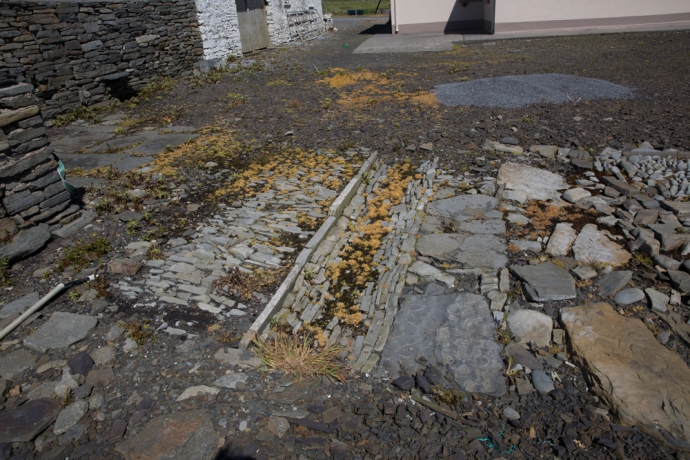 Cattle shed floor looking from the west.  The drainage trough is in the centre and the area where the cattle stood on the left 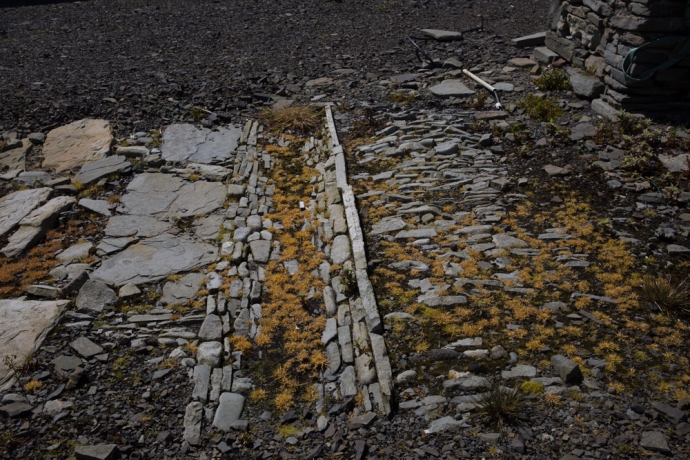 View of cattle shed site from the east.

And then north of this is an area of large flags of Liscannor stone. Mikey Talty who was born in the cottage 80-odd years ago remembers this as a piggery, though he had no recollection of other structures where the cobbles and setts are. The north wall of the piggery had a doorway and this can be seen now filled in in the same style as the surrounding stone wall beneath a lovely stone lintel. 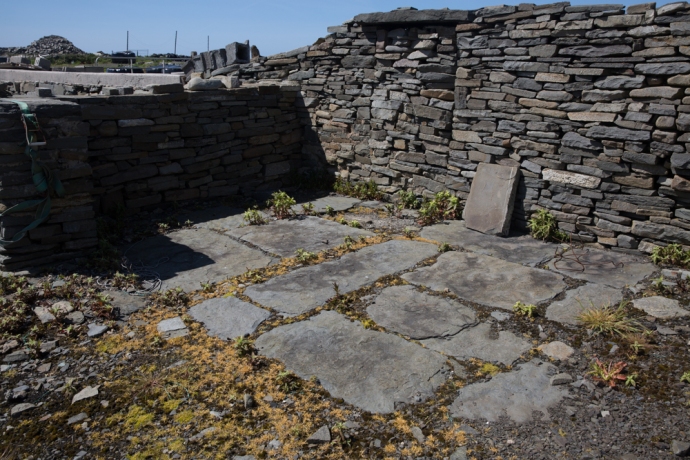 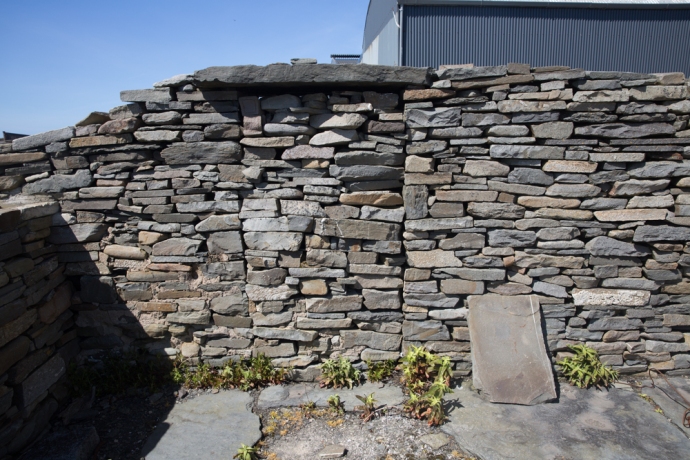 Close up of infilled doorway

So there was continued usage of this site to house animals with evidence suggesting the possibility that it may go back over three hundred years.

I think that’s cool. And in my back yard too.

Disclaimer: These conclusions are my own and based on my own observations as well as the recollections of the Talty family. I am not an archaeologist but if anyone out there has specific knowledge of the use of cobbles in farm buildings and their age I would love to hear from you.