The Beach at Allihies, Co. Cork. A Beautiful Legacy of Ignorance and Indifference.

Allihies is a very photogenic village near the tip of the Beara Peninsula. I have blogged on it before (click here).   There I gave an overview of the whole Beara Peninsula as well as highlighting the extensive history of copper mining in the area,  but I didn’t mention the pretty beach near Allihies, which I didn’t visit last time. 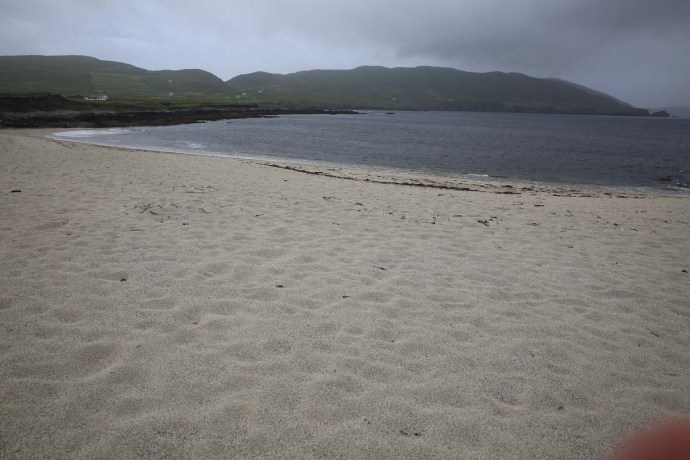 The beach at Allihies

Back in the Beara recently, I had a bit more time and found myself on the strand during a break in the bleak weather.  This beautiful place has a very interesting back story and an unexpected connection to the mining operations located high up in the hills above the village.

The beach is a surprise.  It seems like it shouldn’t be there. The whole coastline here is rugged and rocky and apparently too wild for sand to accumulate.  And yet there it is, an extensive thick accumulation of golden sand in a protected inlet. 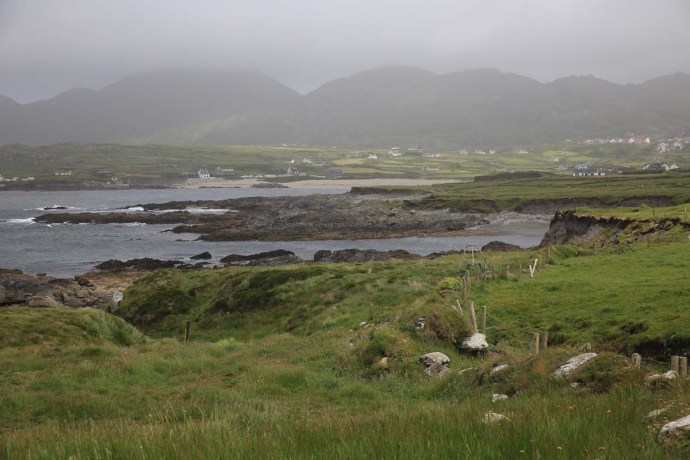 The inlet at Ballydonegan with the Allihies Beach, the village in the background and the Caha Mountains 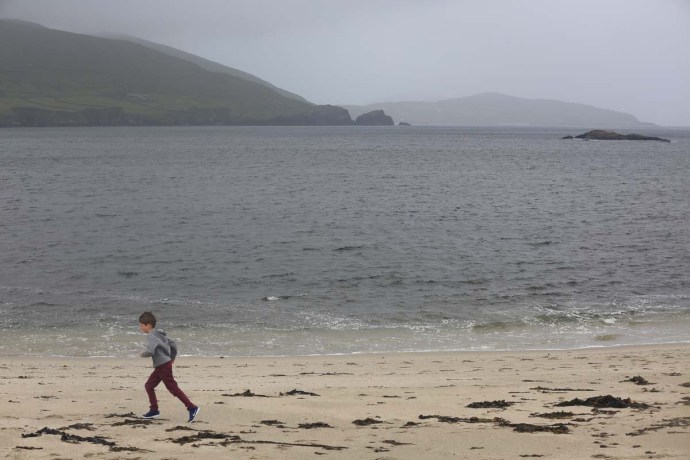 A glorious setting and safe.

A close look however shows all is not what it seems.

The sand is very coarse.  It is also very uniform in size and it only comprises fragments of quartz and shale.  There are no organic bits or shell fragments as you would expect.  In fact is unlike any beach sand I have seen.  There are no dunes; just a thick deposit of banded unconsolidated coarse sand.  And due to the lack of fines, it is not compacted as might be expected. It is very hard to walk on and especially hard to climb its slopes.

So where did it come from?

This is where the mining comes in.  Copper mining took place at Allihies for over 70 years starting in 1813.  In its day it was the largest copper production centre in Europe.   Allihies was remote and there were no environmental or safety controls and the Mine Captains pretty much did what they liked.  So rather than build an expensive dam to contain the tailings they were pumped into the local rivers that eventually found their way to the coast at Ballydonegan.  Standard practice then.  Environmental vandalism today. 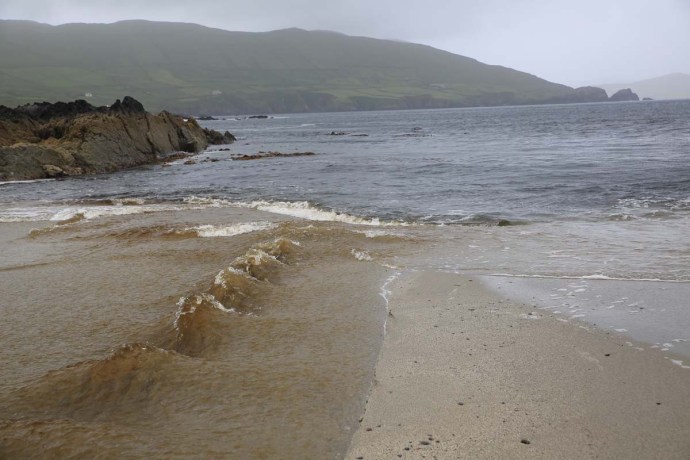 The mouth of the river.  Some unusual giant ripples.

So what are tailings?  In hard rock mining the rock containing copper minerals is brought to the surface for processing.  The total percentage of copper minerals may only be about 2-5% so over 95% of the rock mined must be disposed of.  It is crushed and then the copper minerals are separated with the remainder of the rock disposed of.   It was lucky that the processing this time didn’t involve toxic chemicals so the tailings was reasonably clean.   It accumulated at the mouth of the river and eventually the Atlantic Ocean converted it into a beach.  The vast majority of visitors are probably totally unaware that it is man-made.

It is a pretty place.  A great safe swimming beach and stunning views.  It is ironic though that in the 21st century it is one of the attractions of the area whereas two centuries ago it would have been a major blight on the landscape and that a place of such beauty exists because of man’s indifference and ignorance.

Not quite empty.  Holiday makers from the popular adjacent caravan park