Dingleingdinglelingering. Living on the Hedge.

So what’s the word for someone from Dingle? Maybe a Dingleling?  Sorry about that.

And what if someone from Dingle spent a relaxing day touring the Dingle Peninsula? Well that would be Dinglelingdinglelingering wouldn’t it?

Well enough of this silliness.  I am not a Dingleing but I would be quite happy to be.

7th August 2017.  The weather forecast said scattered sunshine and showers. That was like a gold-plated invitation to spend the day outside. So I decided to go Dinglelingering.

The weather forecast however, luckily, was wrong. There was NO rain and lots and lots of sun. So a quick trip around the Peninsula saw me and my very worthy photo assistant for the day, Sophia, from Bavaria, a first time visitor to Ireland, doing a quick tour over Conor Pass to Dingle, Ballyferriter, around the Slea Head Road to Inch and back to Tralee.

The scenery is of course astonishing and a huge contrast to the magical winter wonderland I posted on my blog in March.

Here’s a few samples from the most recent visit. Glorious panoramic views from the Conor Pass;  an elevated glacial lake way above the road;  truly spectacular striations on the bare rock caused by glacial action; the coastline along Slea Head, Inch Beach; a busker, lots of tourists.  Tourists yes but thankfully not the stream of buses you get in the Ring of Kerry.  But after all it is August.

Elevated glacial lake above the waterfall on the Conor Pass

View from tht top of the Pass.

colours in the floor of the lake

Glacial striations on the edge of the lake, caused by movement of ice.

The water exits the lake by this narrow channel.

Lakes on the valley floor. 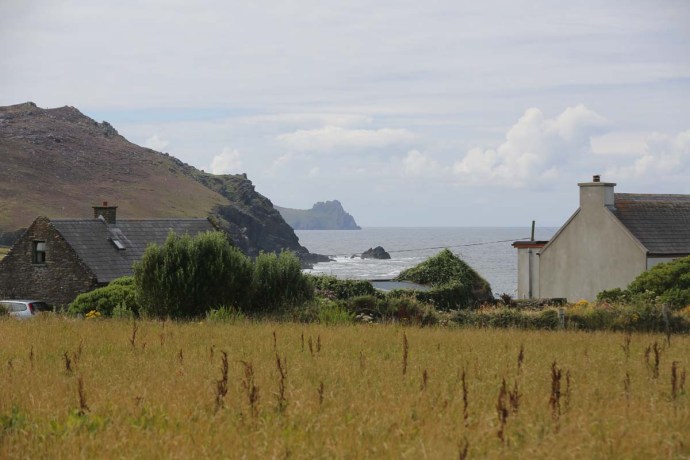 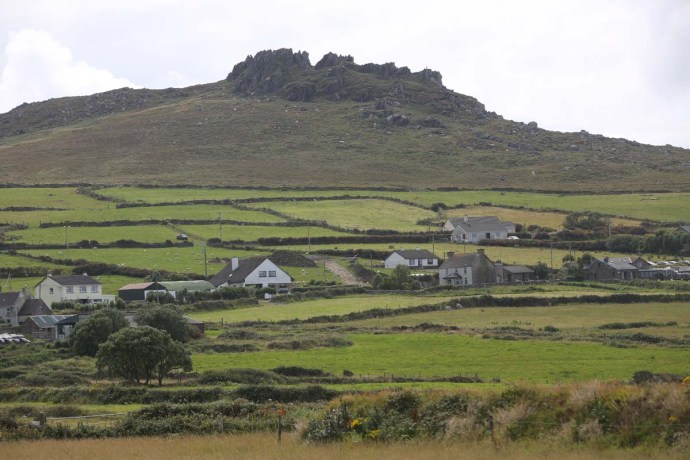 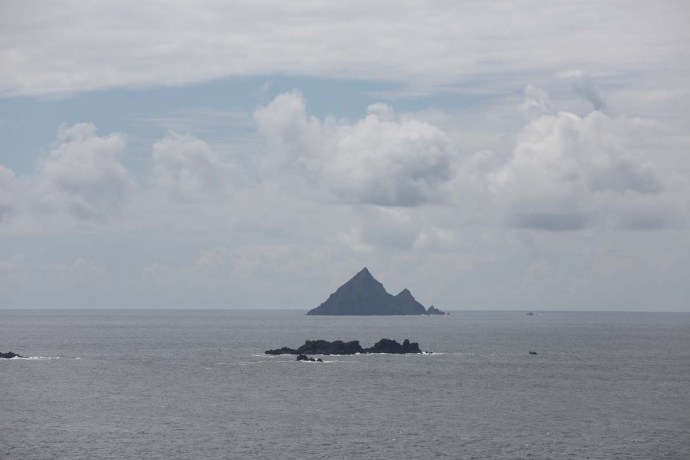 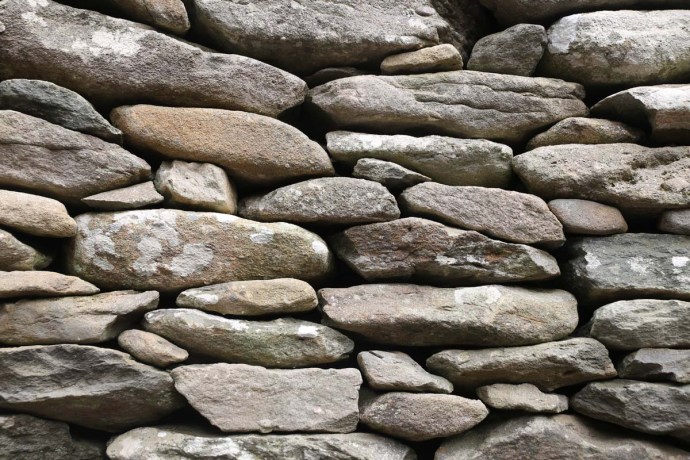 Detail of a hut wall

But that’s not what I wanted to talk about in this blog.   I want to focus here on what I think is the highlight of a summer soirée in this part of Ireland.

Living on the Hedge.

I can’t speak for the rest of Ireland but Clare and Kerry are in late July and early August absolutely ablaze with a riot of colour lining the roadside. This is my fourth summer here but I never noticed this intensity of flora before. This year has produced magnificent displays of wild flowers. We had it earlier in the Spring with the Spring Gentian and orchids carpeting the Burren and then the incredible Whitethorn and now this vivid show.

Hedges are a major feature of the Irish roadside if you leave the N’s, particularly if you travel the byways – R’s and L’s. Most of the year you don’t notice them. A drab and featureless tangle of green or in winter, seemingly dead and leafless.  And then the rest of the year, they are vigorous and compete with the tarmac making the roads considerable narrower.   And they can block your unimpeded views of the countryside.  But it’s a different story when they are in flower.

So here in Dingle I decided to have a closer look. This particular boreen is a part of the Cosán na Naomh or Saints Road, an 18km pilgrimage road to the foot of Mt Brandon.  The magnificent backdrop is of the coast around Ballyferriter with the Three Sisters being prominent.

The hedge is a layered pastel of orange, red, white, yellow and purple.  I was intrigued and wondered how much of this display was endemic.  I knew fuchsia wasn’t. What about the rest? 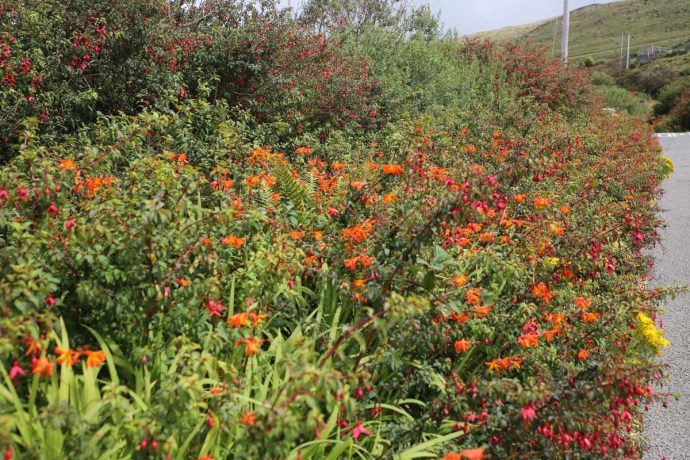 So here is a bit of a rundown of the most obvious plants that make up this display. I’m sure I’ve missed heaps as I am not a botanist but it’s what my eyes and camera were drawn to.

Fuchsia.  Fuchsia loves Ireland. I struggled to grow this back home in Australia. Too dry, too hot, too much sunshine.  But here those issues are not a problem. You don’t see the many exotic varieties just the one purple and blue single bell shaped flowers.  Of course the flowers are exquisite and despite its origin in Chile the bush has been so naturalised that it is the Cork county emblem.

Wild Angelica. Standing out against the orange and red are the white many rayed umbels of this tall perennial. A native of Ireland 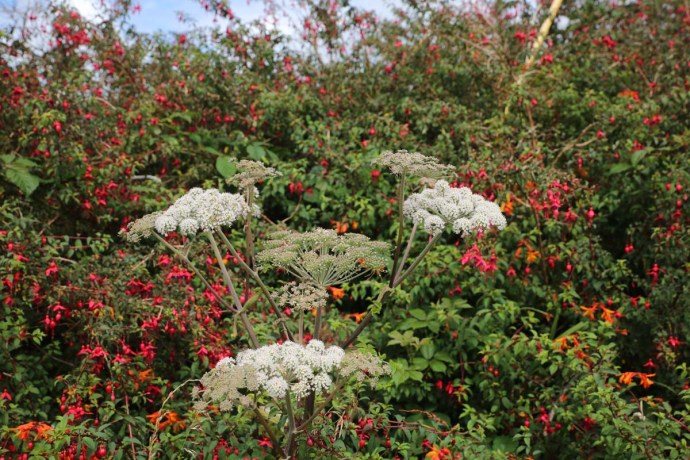 Brambles/Blackberries   One of the pleasures of Ireland is the gathering of blackberries from the roadside. No worries about spraying as in Oz. This time of the year the brambles are flowering and developing berries.  A taste of what’s to come. You have to look hard among the verdant growth but soon they will dominate.  Native to Ireland but a pest in Australia.

Wild Carrot  A tall erect plant with a cluster of white flowers. Native.

Tufted Vetch. A splash of purple on long stalked racemes. Not so common here but ver abundant.  Native

Montbretia.   The most startling plant. Long strap like leaves and multiple flower stems with bright orange funnel like flowers. I love the way this plant is described as a Naturalised Garden Escape.  So definitely not a Native. 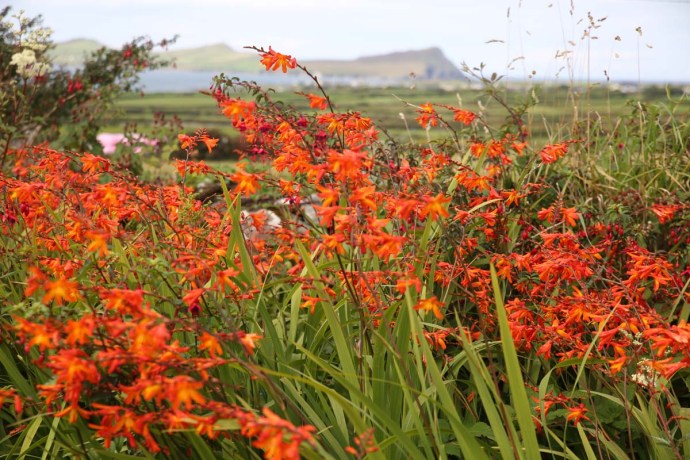 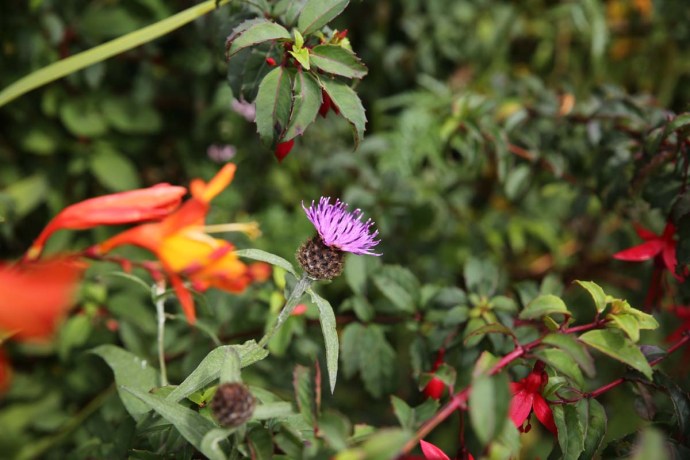 Hawksbeard.  Splashes of yellow among the reds oranges and purples.  Clusters of small yellow flowers with erect buds. Grows to about a metre.  Native and very common.

So, turns out most of the plants are native. But and here’s the big but. The two dominant plants of the roadside are the Fuchsia and the Montbretia and both these are introduced. The hedges without these two plants would be very different and I’m guessing would be dominated by brambles with the other plants struggling to get a foothold.

If you are visiting Ireland in Summer, do take time to stop the car and have a look. 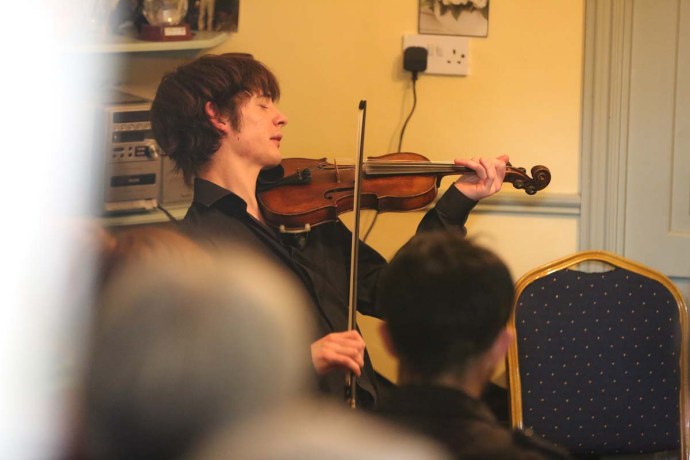 It’s not everyday that an album comes along that completely stops you in your tracks. That you just listen to over and over again and keep discovering something new. There was a real buzz at the Traditional Irish Music Festival in August 2017 about this album and the room was packed out at Peppers Bar on the Thursday evening with people peering in the window to get a look.

He was supported by Clare ‘royalty’ Mary MacNamara and Dennis Cahill and I listened from outside the door along with the others who couldn’t get in.

I didn’t remember meeting Ryan Young. But he assured me we did, two years ago at Feakle at a Martin Hayes workshop. And we have been Facebook friends since then so we must have met.   In 2015 Ryan was visiting Ireland for the first time from his home in Loch Lomond in Scotland and meeting Martin also for the first time.  Too shy though to speak to his idol he sat through the three days silently.

A lot has happened for Ryan since then. I met him again this year at Feakle and as before he sat in on Martin’s workshop. This time though it was a different matter.  Martin was well acquainted with him.  In the last two years he has achieved second in this year’s BBC Musician of the Year, supported Martin and Dennis Cahill at Celtic Connections and produced a CD after a You Tube clip was spotted by renowned producer Jesse Lewis.  And he deserves every ounce of this success.

Although hailing from the Highlands he is an adherent of the Clare style of fiddle playing, particularly East Clare. He had grown up with recordings of PJ Hayes, Paddy Canny, Bobby Casey and Martin. It was inevitable that he would bring this style of playing to his native tunes.

And that’s what his eponymous CD does. But for me it is done in an extraordinarily sensitive and sensual way. The clarity of sound and the sweet accoustics reflect that it was recorded in the Opera Theatre at the Royal Conservatoire of Scotland.  This, with the brilliant controlled and expressive playing make this an outstanding recording.

The music is sometimes irresistibly Scottish but, even though all the tunes are ‘Scottish’, it often doesn’t sound like it. One can imagine purists would not be too impressed. Many of the tunes though are familiar sounding;  I am sure I heard elements of Rakish Paddy in there somewhere.

It is of course hard not to reference Martin Hayes while you are listening but there is so much originality and thought in the music that it does take on a life of its own.  There are a number of longer tracks that explore different rhythms and textures in the same way that Hayes and Cahill do and the use of the piano at times is particularly pleasing.

But for all this, it is not Clare Music, it is not Scots, it is Ryan Young. That’s quite an achievement.

These are some of the names recorded historically for Achill Island in West Mayo. The original meaning of the name however is unknown.  This is perhaps fitting as the Island itself is somewhat enigmatic.  I am constantly surprised, as I was on my most recent visit in July 2017.

Dooagh is one of a number of pretty villages on the island.  It has variously prospered and faded over recent centuries.  It became a hub when it received villagers who abandoned their homes in Slievemore during the mid 19th century.   The village is nestled on the Atlantic shore and its wellbeing has always been connected with the sea.  Fishing, seaweed and the hotels and guest houses that lined its sandy beach.  Then in 1984 the sand disappeared.  A wild storm stripped it away to the bare rock.  The decades passed and Dooagh had resigned itself to its beach’s fate until in April 2017 the sand returned.

The world went just a little mad, but this is a  perfectly natural event and has apparently occurred many times before.  John O’Shea, who has lived in a house on the beach for 46 years explained “When the wind is up north the sand builds up, when the wind’s sou’ west the sand goes out.”  It happens with Keel, Dooagh and Keem Bay, he said, and it happens regularly.  But this time seems to be different. The story has gone global.   John has had phone calls from Texas, Netherlands, New Zealand asking what’s going on.  A group of Chinese came – they didn’t want to see the Cliffs of Moher they wanted to see the New Beach!  Irish Times reported it and since then the story has spread.  Al Jaziera, The Times and more recently the Guardian did a six page spread. 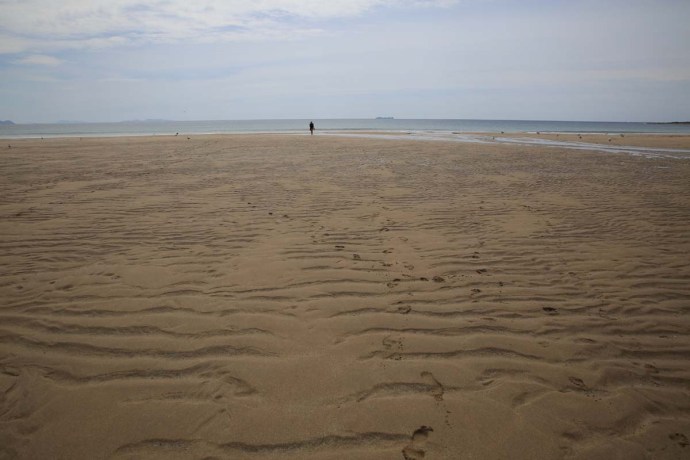 A particularly high tide and favourable marine conditions along with the northerly winds has brought back the sand and boulders that had been waiting below the low tide mark.  The world has taken notice and the tourists have come.

Beaches are a dynamic environment.  Man’s desire to live close to the beach creates conflicts that are often resolved by serious intervention in the natural process.  Huge quantities of rock are sometimes dumped to protect buildings or infrastructure and prevent erosion of the land and sometimes sand is ‘shifted’ from elsewhere to maintain  a ‘beach’.

What has happened in Dooagh however shows that if we just leave things alone, Nature will find a way to restore equilibrium.  Beaches disappear.  And they come back.  We should celebrate with the people of Achill the return of  its sixth beach and hope that it lasts a long time.  But if it doesn’t last and the tides and winds sweep it away, we should celebrate that too.  These natural rhythms are on a planetary time scale and rarely on a human one.