It is mid-January.  As I write this there is heavy fog outside my Katoomba cottage in the World Heritage listed Blue Mountains, west of Sydney.  It is a little chilly and the ground is still wet from a couple of days of rain.  Seriously, rain!  It doesn’t feel like summer and it certainly doesn’t feel like the Hellfire of the past three months.  Memories fade; tinged with relief that maybe the threat has passed.  But we shouldn’t forget.  How could we?

This has been a summer like no other.  To watch the destruction and heartache wreaked on thousands of Australians on our screens and to feel the fear of not knowing if your own property was to be in its path is indeed heart wrenching.  Statistics can tell us some of the story.    23 dead, 11 million hectares burned, 2,000 houses lost, one billion animals killed.

But this was a crisis that affected a whole nation.   Smoke shrouded cities, oppressive heat, evacuations, rescues, thousands of volunteers, roads closed, livelihoods ravaged, ash falling from the sky.  We will feel the effects on people, animals, land and community for many years. Can you believe that they are considering putting Koalas on the list of endangered species, with so much habitat wiped out? Among the gloom though we can be grateful for some miracles.  The stand of the remarkable Wollemi Pine, discovered only a few years ago, but there for over 60 million years, was saved from the Gospers Mountain megablaze.  Such things can’t be put into words.

Personally, I am one of the lucky ones. I had only been in my new house a week when the threat became real.  On two occasions I had the car packed ready to evacuate.  Musical instruments, computer hard drives (years of photos), books?.  What do you choose and what do you leave?  But miraculously, the settled strip along the Great Western Highway was spared, thanks to capricious winds and the incredible efforts of fire fighters.

My own personal relief was tempered though by the daily images of the suffering of others.

Last week I drove down to Melbourne and on the way I paid a visit to Adelong, a delightful village in the foothills of Kosciuszko. The Snowy Mountains Highway was partly open, though all roads in and out of the Park were closed.   Adelong was spared with the fire stopping just a few hundred metres away, though towns such as as Batlow, Tumbarumba and Talbingo weren’t so lucky.  Normally abuzz with tourists it was busy this day but with fire crews and water tankers.  I did my bit for the ravaged rural economy here and stopped at the cafe for a toasted sandwich and filled with petrol.  And as the temperature headed to 40 degrees on yet another potentially ‘catastrophic’ fire day, I took time out to visit the evocative ruins of the Adelong Creek Gold Mine from the 1870s.  Ravaged historically by a number of fires, it was spared this time.

The fires were out here and I went for a walk in the Blackened Forest nearby.  From a distance the damage doesn’t seem so bad.  But as your eyes become accustomed to the scorched treescape and burnt out grasslands, you start to notice the charred devastation.

In the space of a couple of kilometres I saw three farmhouses burnt to the ground. Totally lost, while a neighbour just across the road survived.  Sheds, farm equipment, cars, tractors and miles of fences.  Lost. 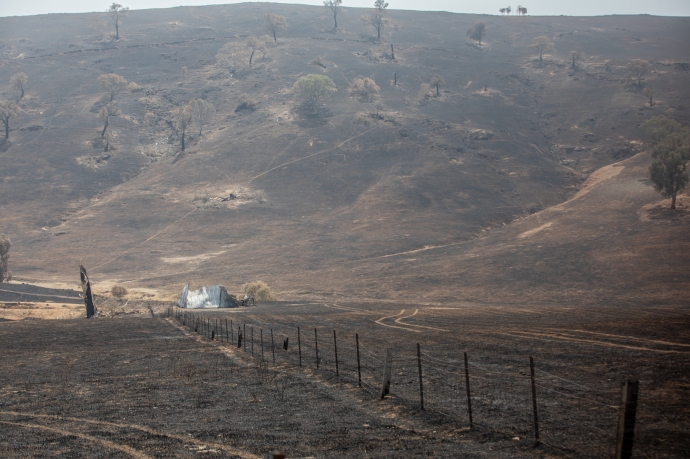 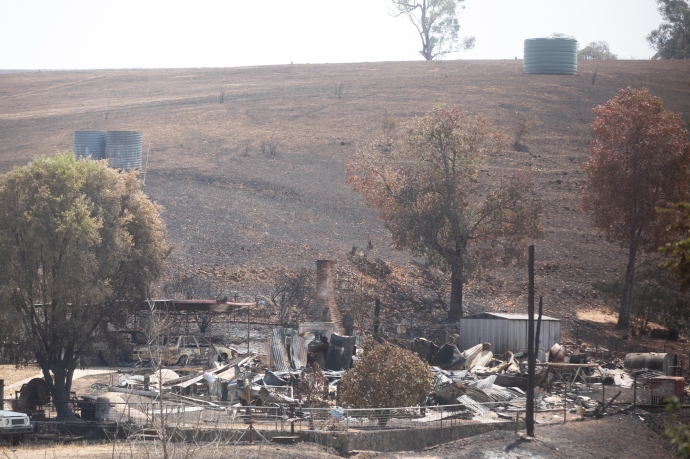 Walking the ground makes it real. Twisted metal. melted plastic tanks. A burnt dog kennnel, remains of swings and trampolines.  Sad relics of a rural family idyll .  A property with the name ‘The Poplars’ on the mail box; gone.  Everything except a row of the eponymous poplars.  I was struck by the overpowering stench of death.  Sometimes you see the cause; perhaps the carcasses of  cattle and sometimes you don’t, but it makes for a reality that you can’t get on a TV screen. 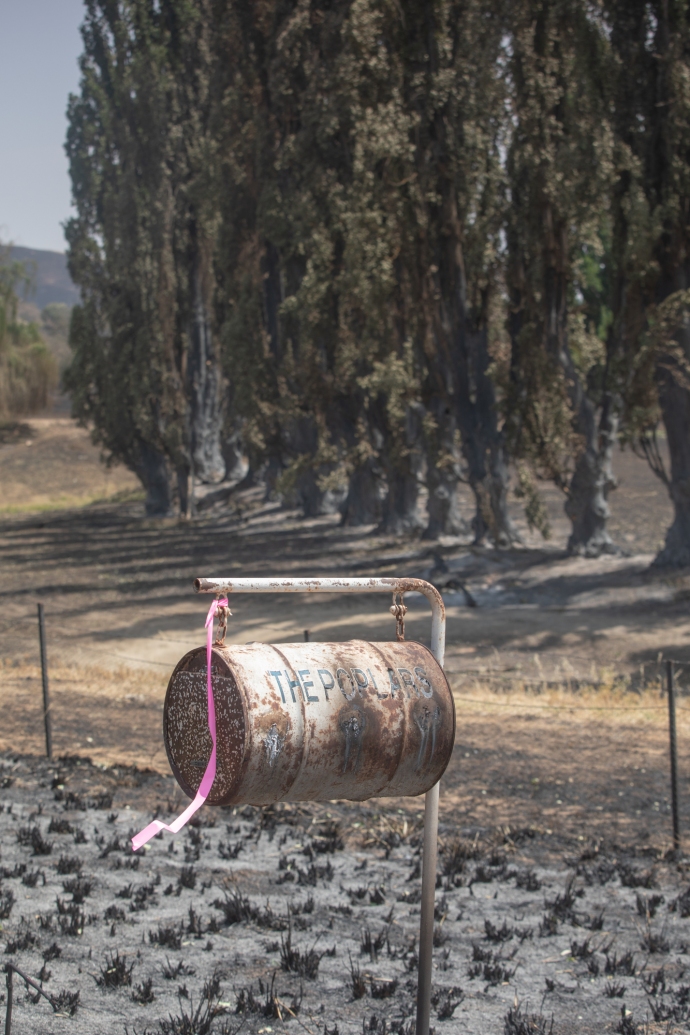 I was torn.  As a photographer I wanted to record images of this devastation but at the same time I felt like an intruder into a world of pain and grief and that I had no business being there.

But what it did do was reinforce to me that we mustn’t forget.

That’s why I am posting this blog.  I know many have donated to the myriad of requests for help and the response around the world has been astonishing.  But such is the immensity of the disaster that it is the proverbial tip of the iceberg.  Local, city and national fund-raising efforts have popped up everywhere.  And musicians have been well to the fore.  Fair play to Queen, Alice Cooper, k d lang, and Olivia Newton-John etc who will play at a nine-hour concert in February, but I want to give some publicity to the Irish Traditional Music community of Melbourne.

Not just a one-off event but THREE concerts on three consecutive Saturdays.  First show this Saturday 18th January will feature Irish stars Tola Custy, Pat Hunt and Maggie Carty among a host of local Melbourne talent.  The concert starts at 5.00 pm and will be followed by a monster session.  And you know how good sessions at the Jar are.  I was lucky enough to be there on Wednesday last with Tola, joined by Paddy Fitzgerald and it was a humdinger.  Here are some pictures of what you can expect on Saturday.  If you can’t get there it will be live streamed.  How about that?  That’s 6 am in Ireland.  Perfect to go with breakfast on Saturday morning while Storm Whatever rages outside.  Follow up shows will include one on 1st Feb to support Nariel Creek, site of the Nariel Creek Folk Festival, which was curtailed when it had to be evacuated this year. 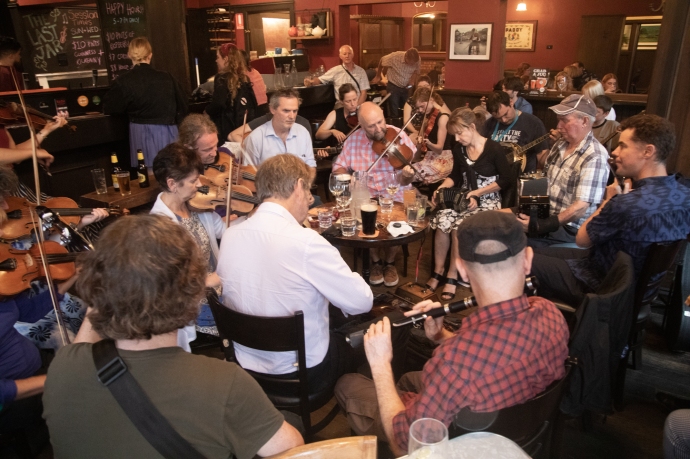 Hope you can find the time to support this event.

6 thoughts on “Fire, Fury and Hope.  An Australian Story.”