Ruins and Ruined Dreams. An Abandoned House in Roscommon,

I have talked about abandoned houses in the Irish landscape many times. They are so characteristic, they are part of the DNA imprint of the countryside. Ruins appear to date from many times and reflect the struggles of the Irish as they deal with famine, invaders and economic and social dislocation. Naturally the iconic image is of the castle ruin or the grand manor house, but cottages and farm houses are so much more abundant. I often wonder about the stories behind these buildings. Ruined lives and ruined dreams; or did they find a better life somewhere else.

This is one such house. It lies on the edge of the Kilronan Mountain Bog near Ballyfarnon in north Roscommon. A remote place.  It is close to the Arigna coal mine and perhaps the family living here derived its income from there.  The ruin is intact but blackened walls at the entrance suggest maybe some fire damage at some stage. It is not an old house and the front door is missing a panel so curiosity got the better of me. I walked into a time capsule.

The house is a mess. Largely empty with years of accumulated debris covering the floors. Sheep have been regular visitors.   The rooms are spacious and well suited to a family.  The walls are bare save for a small crucifix over the living room door.  The walls were generally neutral colours but through the peeling paint are bright greens and pinks reflecting changing fashions. The kitchen was bright blue with pink trim.  Scrape away the sediment on the floor  and it reveals a very 60s brightly coloured lino in the main living room.  Definitely not to everyone’s taste but an individual statement.   No personal possessions remain.  Nothing that would give us a sense of who lived here.  Items too large to take though have been left behind.  A television, some chairs, a fridge and stove. All now beyond use. 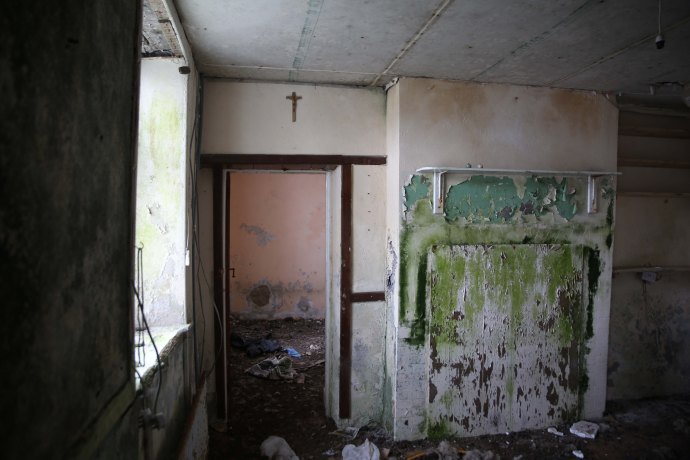 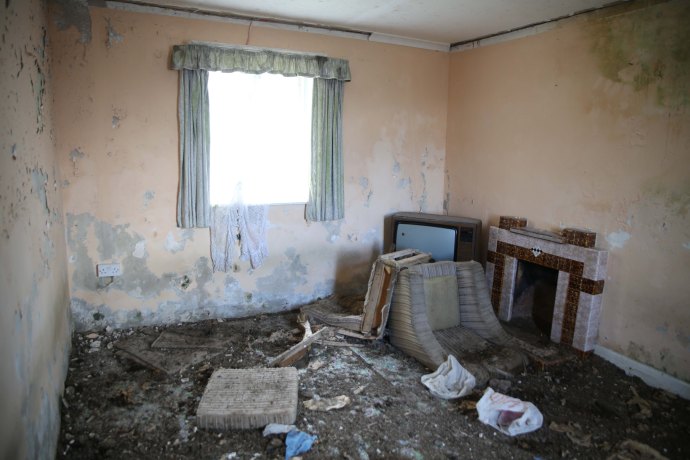 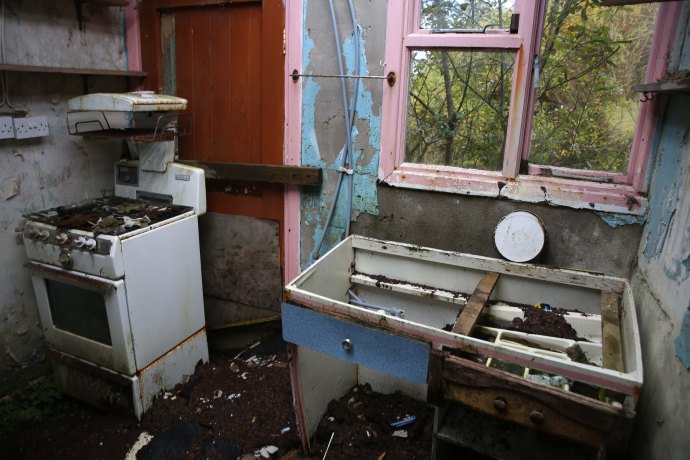 Stairs lead to a mezzanine level with two rooms, shelves and some decaying mattresses.  Everything is still there in the bathroom, even the shower curtain and taps. 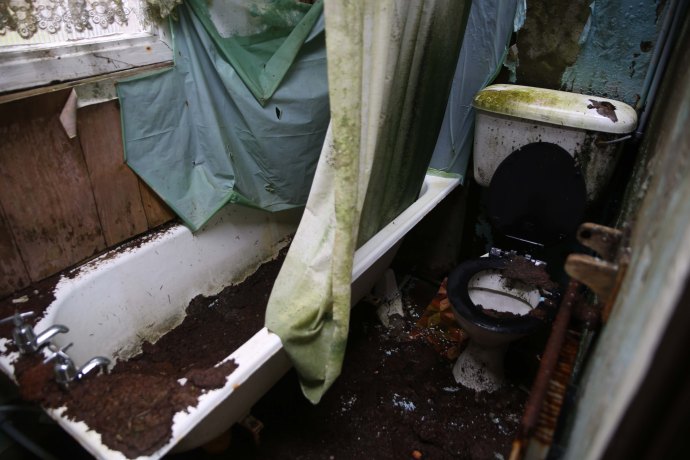 I got the sense of a comfortable home. There is central heating and fireplaces in every room; there was insulation in the ceilings and to me it would seem they had the trappings of a good life.

What went wrong and when? Where did they end up? Fortunately we can answer as to when?  A newspaper among the papers strewn on the floor dates from July 1997.  My eyes fell on an article with a headline: “Anna Spices up Wimbledon”.  A sixteen year old Anna Kournikova was at the beginning of her rollercoaster ride in the world of tennis while this Roscommon family grappled with a very uncertain future.

My original thought that the breadwinner worked at the Coal Mine makes sense except that it closed in 1990.  Perhaps they struggled on for another 7 years before finally giving up.

We will never know what makes a family walk away and leave their house.  Leave fridges and stoves and furniture.  Leave curtains.   And head somewhere for a better life.  Unfortunately it has been a huge part of the Irish narrative for nearly two hundred years.

No doubt such events happen in other countries but what is different here is the scale of the dispossession and that the evidence remains for decades perhaps even centuries with these dwellings lying empty and untouched; as if interfering with the ruin would somehow be disrespectful.

So many pages of the Irish Story lie open to us in this way.  However the writing is indistinct and many times illegible and impossible to decipher.

These ruins for me are always a time to pause and think.