The Flaggy Shore and Aughinish. Make the time.

Just a short distance off the N67 which tracks the northern coast of Clare as part of the Wild Atlantic Way is the Flaggy Shore. This is the perfect spot to see the Burren meet the Bay, in this case Galway Bay.  A sweeping stony shoreline with a backdrop of the bare purple hills and the lush green fields beneath.

Look north across the bay, now calm and peaceful and you see the villages of Galway clinging to the coast and beyond this the misty silhouette of Connemara and the Twelve Pins.

The place has a permanent spot in Ireland’s psyche thanks to one of Seamus Heaney’s most celebrated poems, Postscript.

And some time make the time to drive out west
Into County Clare, along the Flaggy Shore,
In September or October, when the wind
And the light are working off each other ……

Heaney in describing how the poem came to him said:   “I had this quick sidelong glimpse of something flying past; before I knew where I was, I went after it”.

He has said it beautifully of course so I won’t try and improve on those words.  All I can do is attempt to give that feeling in pictures… 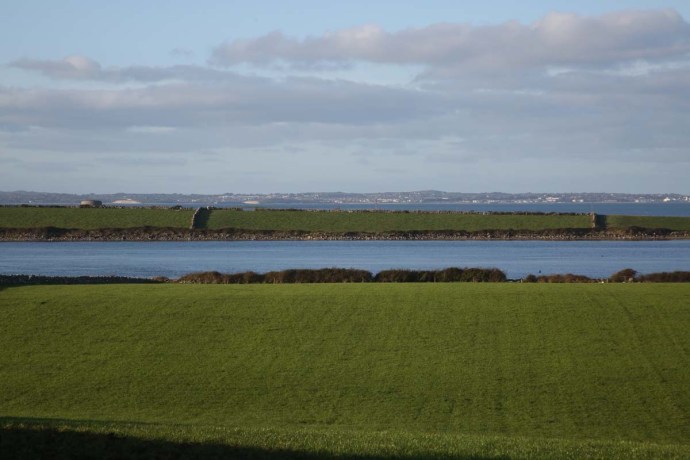 There is no beach, as such, at Flaggy Shore. Just boulders, pebbles and rocky outcrops. But a walk on the strand will well reward. You can stroll along the roadway or explore the limestone platform in the littoral zone.

This is the best place in the whole of Clare to observe the coral fossils that make up such a large part of the 350 million year old layers. Huge colonies of branching corals (fasciculate lithostrotionids) are sliced at various angles revealing themselves from all perspectives.  Their true branching form can be seen often in section on the rock face. Sometimes the colonies seem completely intact and measure over a metre across. If you have been to the Great Barrier Reef in Queensland it is easy to imagine the warm shallow sea that was once home to these corals and the teeming life that surrounded them. 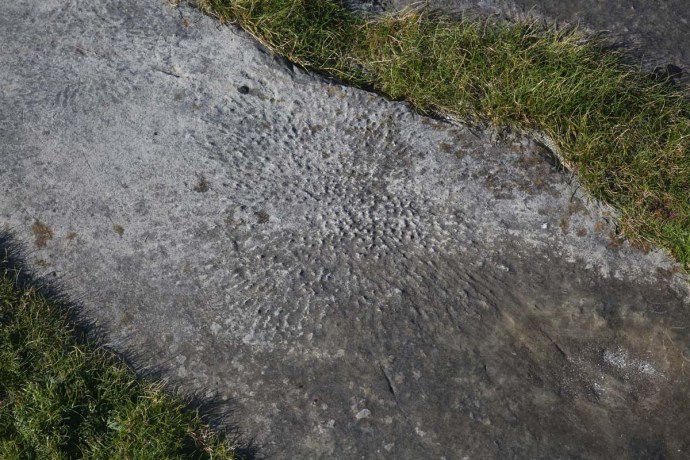 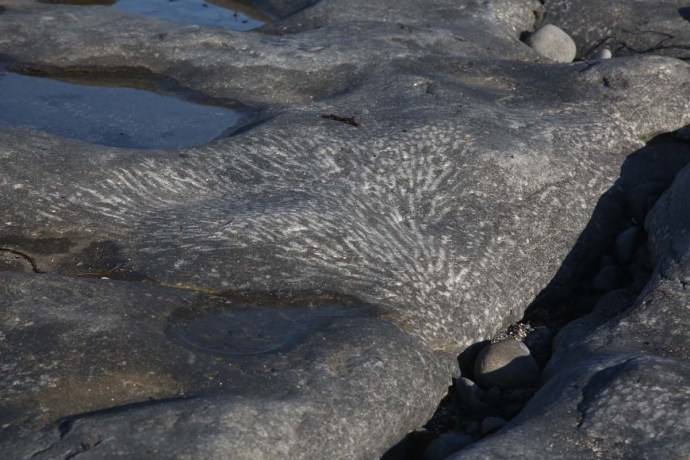 Excellent view of coral colony showing branching and dendritic form. About a metre across.

If you look hard you will see long straight grooves etched into the rock. These are called striations and are caused by the movement of a glacier which smoothed this landscape around 10,000 years ago. Rocks trapped in the ice were dragged along the bottom scouring these cracks. We are able to measure the direction of movement of the ice sheet using this evidence.

Glacial striations on the rock platform at Flaggy Shore

If you like watching sea birds, you are in the right place.  As well as gulls, this time of the year starlings gather in flocks and search for food on the sea shore. These murmurations can number thousands of birds and when performing their acrobatic gyrations they make one of the truly spectacular sights in nature. They swoop and soar and flit and glide in perfect concert. It’s only when you freeze this motion with the camera that you see how perfectly aligned is the movement of each individual bird. I could watch them for hours.

Aughinish Island, just a few hundred metres across the calm water, is comprised of glacial deposits left behind by the retreating ice as the continent warmed. The Island was originally part of the mainland but a devastating tsunami caused by an earthquake in Portugal in 1755 separated it. The British built a causeway in 1811 to service the troops manning the Martello Tower (built to protect Ireland from Napoleon). It is still the only access to the Island.  The one lane causeway actually connects Aughinsh to County Galway which paradoxically means the fifty residents on the island and the occasional vistor who stumbles on this place must travel through Galway to get access to this part of Clare. 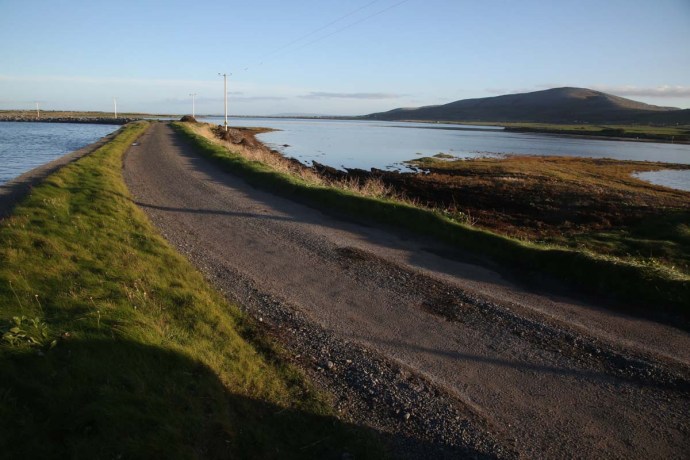 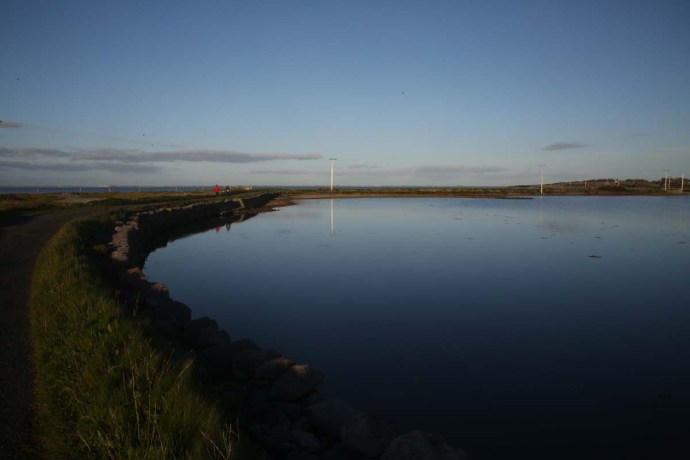 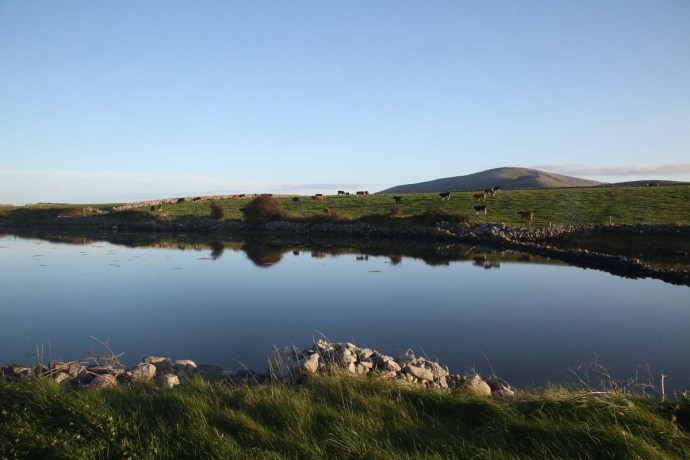 For the ‘tourist’ looking for a quick fix there is not much to take you to Aughinish.  But it is a place to walk and breathe.  Where the quiet ambience is tangible.  It has a feeling of calm so unusual for the Atlantic Coast.  You will be unlikely to meet anyone except a farmer attending to his boggy field or another collecting seaweed blown in by Hurricane Ophelia.  But you will get stunning views across the inlet and if you are lucky enough to see the sun disappear behind Black Head you may not want to leave. 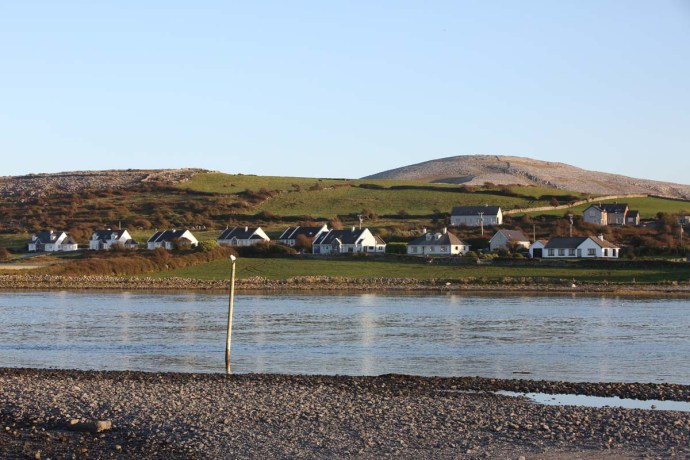 Looking across the inlet from Aughinish to the village of Ballyvelaghan 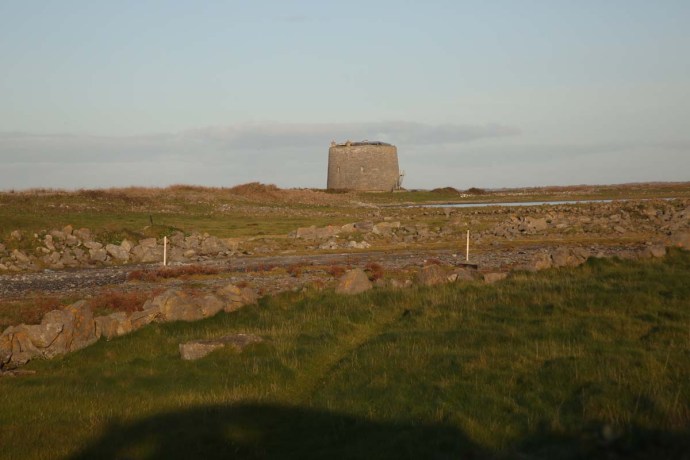 A Martello Tower built in 1811 to defend the Irish coast from the French. 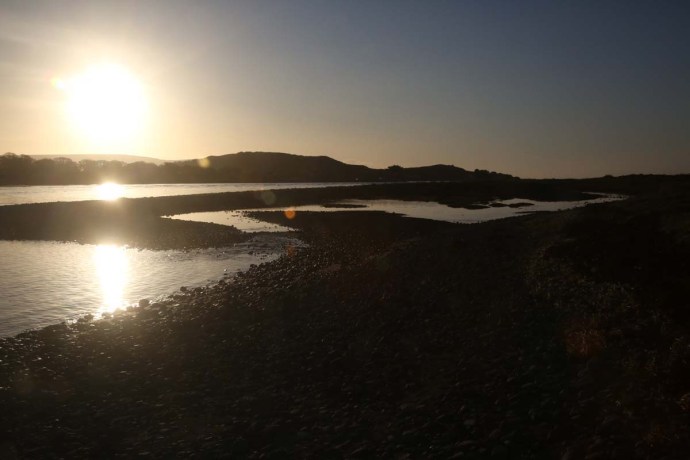 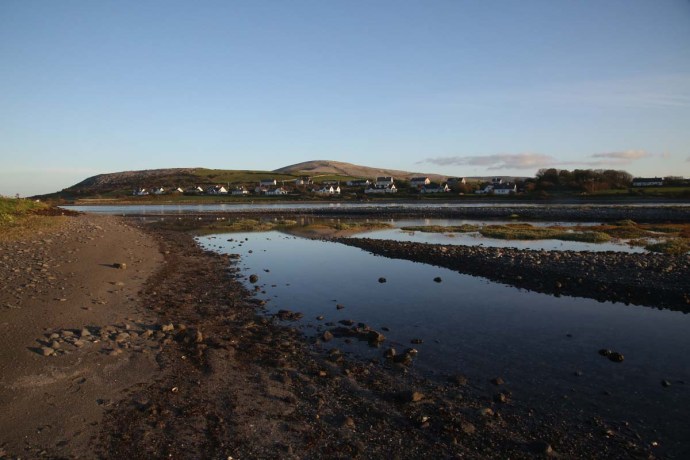 The shoreline on Aughinish.  The softest most comfortable grass you will ever find.

The high tide mark left by Hurricane Ophelia which exploded the previous day. 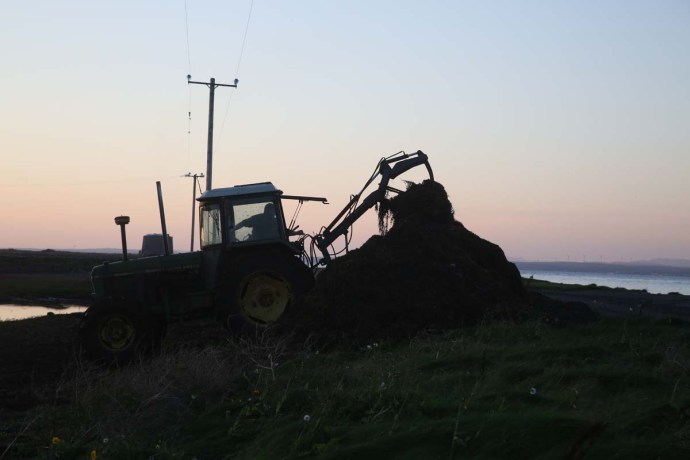 As usual I will let my camera have the last word. 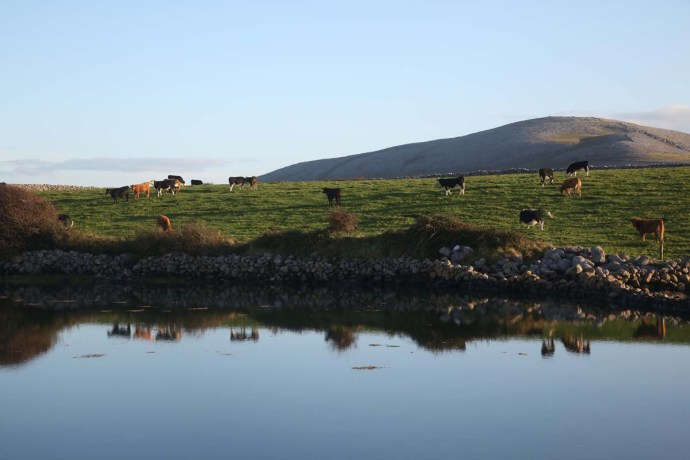 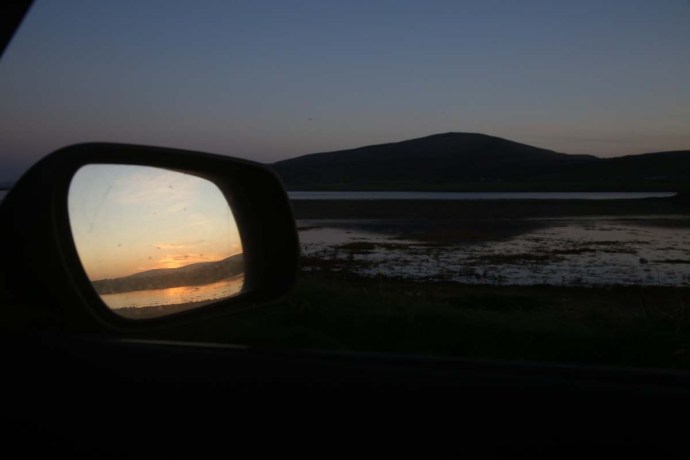