Caherush Point on the coast of County Clare, was my home in Ireland for over five years.  I walkled its shores many times revelling in its biological and geological diversity and its history; of farming and fishing, and seaweed gathering and quarrying.  I had heard persistent stories of a castle at Caherush Point but  I had never been able to find it or anything of its ruins. I decided to fix that situation before I left and in the week before my departure I went castlespotting.

I had a vague idea of where it was. Indeed the townland name holds a big clue. Caherush is from the Irish Chathair Rois which means ‘castle of the woods’ or ‘castle of the promontory’.  So I looked for a promonontory; any woods are long gone. Through this clever bit of deductive thinking I identified an obvious candidate on a grassy knoll that protruded onto the rock platform at almost its most westerly point.

There was little there thought to hang your hat on, until I spotted, half buried and overgrown, the remains of walls built from flat stones with sharp right angles that almost certainly would have been foundations or some sort of retaining wall.  Other flat stones arranged into a wall can be seen at the top of the cliff face looking south from the rock platform.  These are the only evidence of a former tower house, much of which was probably washed into the sea centuries ago on this exposed point.

Parts of walls, probably from foundations of Caherush Castle.  Looking across Mal Bay to Spanish Point. 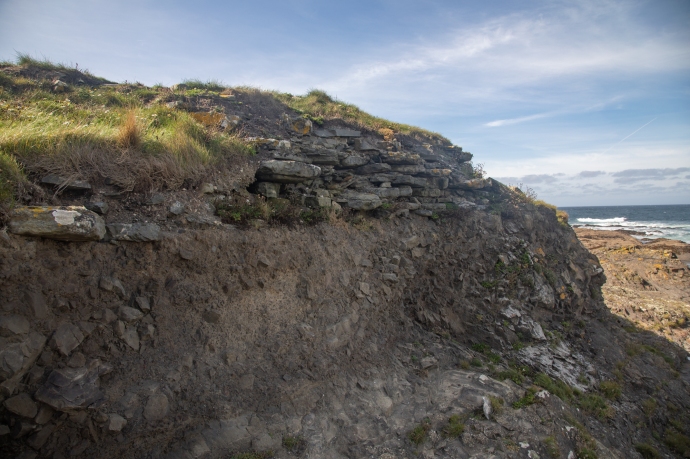 Part of a wall of flat stones seen from the rock platform looking south.

There is virtually nothing in the historic record.  But we do know the castle was occupied in 1573, as it was then that Turlough O’Brien and twelve men obtained refuge there when they escaped after being badly beaten in a battle with the northern tribes of Clare, led by Teige MacMurrough. I could find nothing else and 19th century archaeologists, such as Westrop, give it only passing mention.

What I found really interesting though is that the site is also the location of a kitchen midden. The castle appears to have been built on top of it.  Kitchen middens, which are essentially prehistoric rubbish heaps are located in a number of spots along the Clare coast especially at Lahinch, Fisher Street and Fanore.  Finds in these middens include hammer stones, scrapers, flints and axes along with shellfish and animal bones. Dating shows these are Neolithic (4,000 to 2,500 BC), though there are both earlier and later middens known. 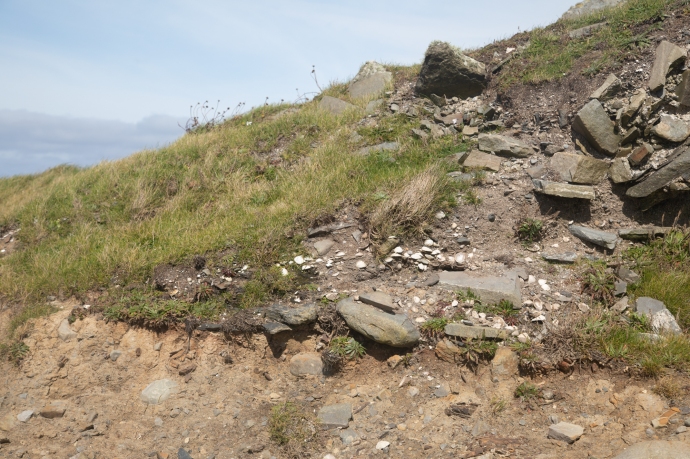 Close up of Kitchen Midden.  Comprises mostly shells.  One fragment of bone in the foreground.

At Caherush, much of the midden appears lost with only a small portion exposed. Taking care not to cause damage, I had my own little dig and found shellfish, fragments of (animal) bone and even a fragment of a large tooth.  No stone artifacts but this assemblage is consistent with it being of the same age as the other Clare middens.  I took a few photos and carefully replaced and buried the material back in the hole.

Some of the material recovered from a small hole dug at the side of the midden. Shells, bone fragments, crab claws and a tooth. 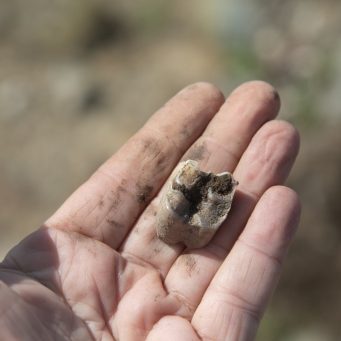 So Caherush Point was settled perhaps 5,000 years ago and who knows who has lived at this spot in the intervening centuries. Cattle graze contentedly now over the Point and, with the continuing ravages of the sea, I expect that in just a few centuries, or perhaps even decades, all evidence of the castle on the promontory and its previous occupants will be gone.