The Colorado Rockies 6. The Garden of the Gods. 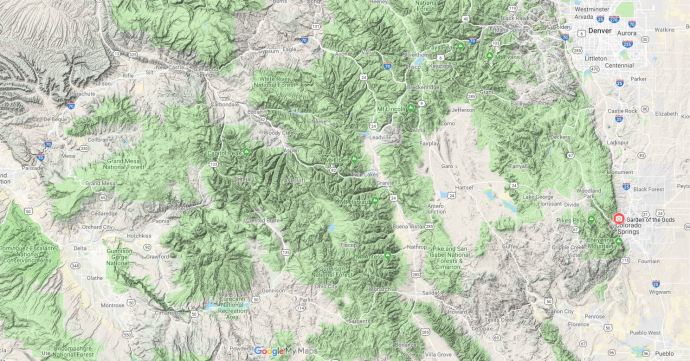 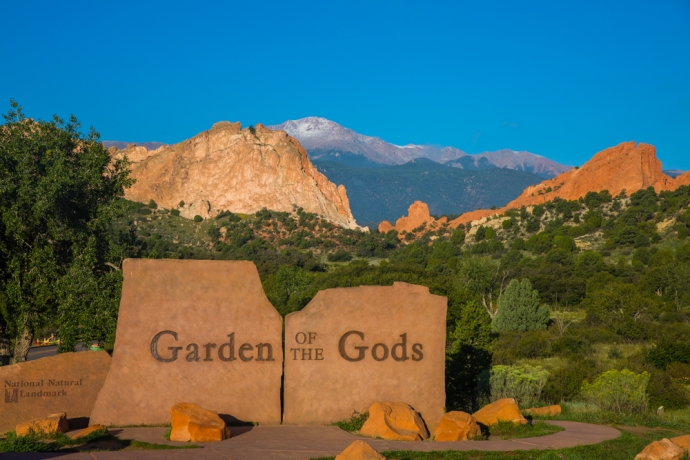 The main entrance to the park with Pike’s Peak in the distance.

The Garden of the Gods.  What an evocative name.

A geological and scenic marvel, this public park and National Monument lies on the edge of the Front Range of the Colorado Rockies surrounded by the communities of Colorado Springs and Manitou Springs.  Indeed it is so much part of the community that the rock formations and houses coexist in many places. 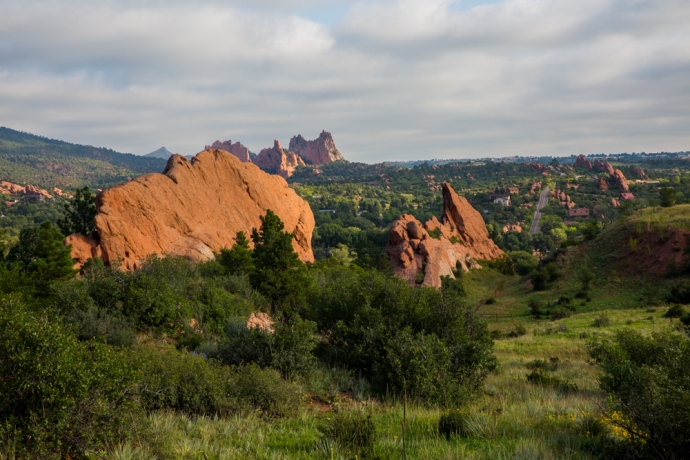 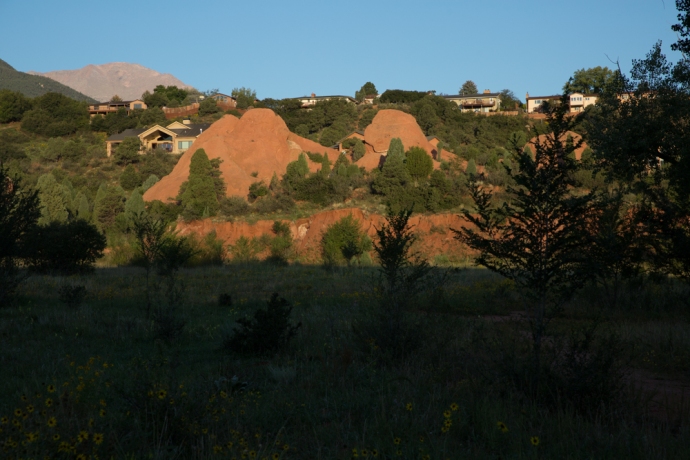 Houses nestle among rock formations of the Garden of the Gods

Jagged irregular spires of red and white sandstone, some reaching 300 feet high, tower over the forest creating a fantastical landscape. The whole thing framed by a snow capped mountain range containing one of the highest peaks in Colorado.  The first Europeans to see this terrain proclaimed it as “a fit place for the Gods to assemble. We will call it the Garden of the Gods.”  The name stuck. 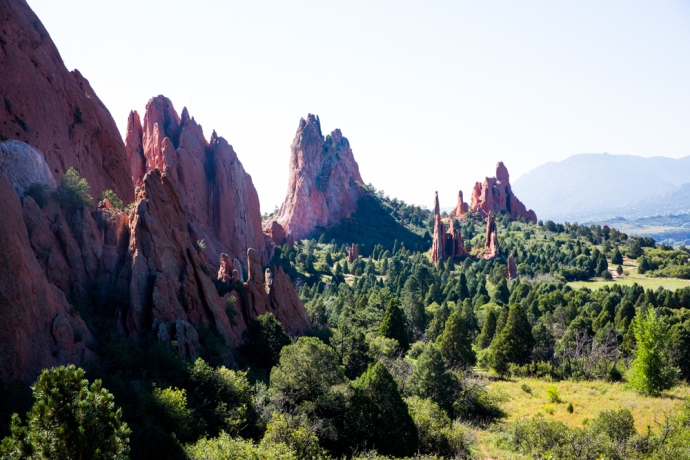 Jagged spires make for a fantastical vista mimicking the pines. 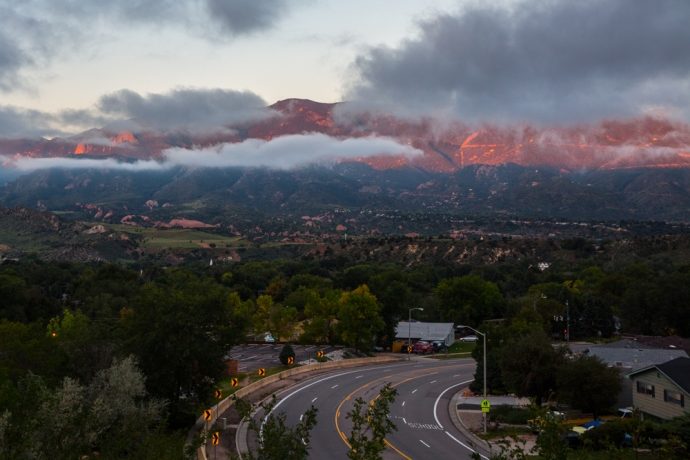 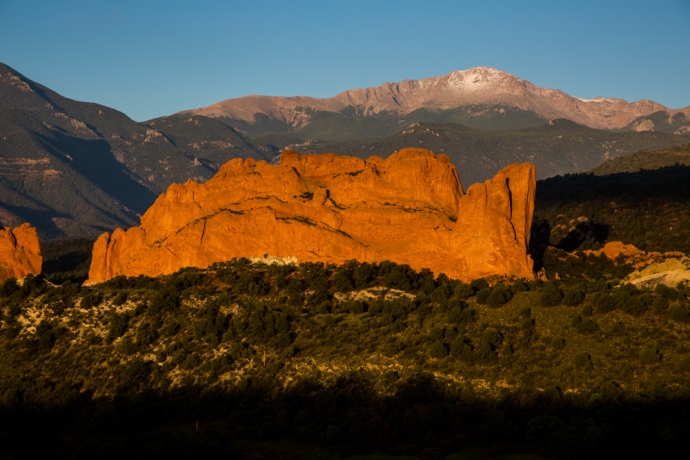 Of course as you can see from these images it is an incredibly beautiful place but the rocks tell a fascinating geological story that spans a billion years, with almost every geological period represented.  Stick with me.  The story begins with 1 billion year old Pikes Peak granite  intruding into the older 1.7b year old gneiss of the so-called Ancestral Rockies . 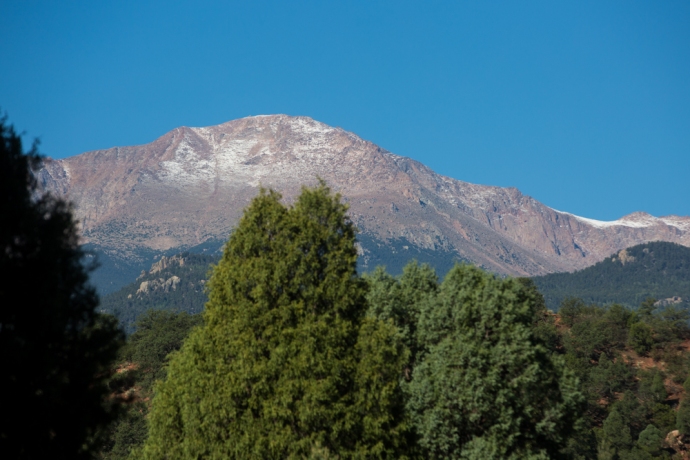 Pike’s Peak looms over the Garden of the Gods Park.  A dusting from a snowfall the previous night. The mountin is comprised of the 1 billion year old Pikes Peak Granite.

These mountains wore down progressively and around 250-300 million years ago the resulting sediment fed into a giant sea that ultimately became a  huge sandy desert. Great dunes of red sand accumulated to create the thick sedimentary rock formations known by geologists as ‘red beds’.

25 million yeas later these then flat lying sediments were covered with a great inland sea until the Jurassic, around 150 million years ago, when the climate changed again creating a rich tropical forest grazed by dinosaurs.  About 65 million years ago an intense period of mountain building began; the orogenic upheaval that built the present day Rockies.  Colossal forces created massive fault lines which stood the sediments upright. 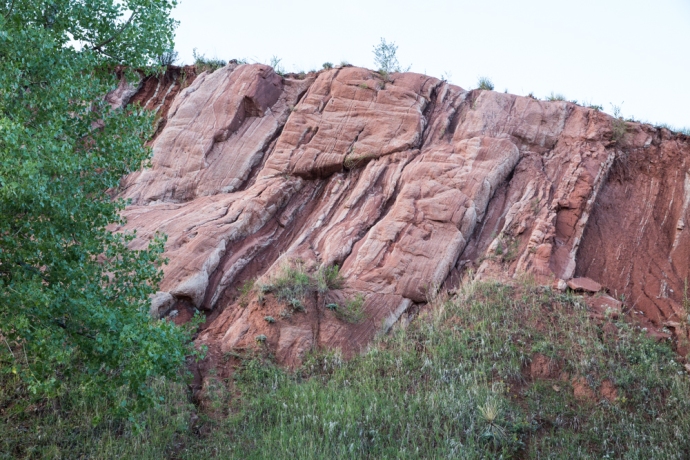 Red sandstones stood on their end by geological tectonism.  A flat lying reverse thrust fault is visible also in this cutting.

Erosion and then glaciation has selectively removed the softer rocks and left the landscape that we see today – a giant  sculpture in sandstone, conglomerate and limestone. 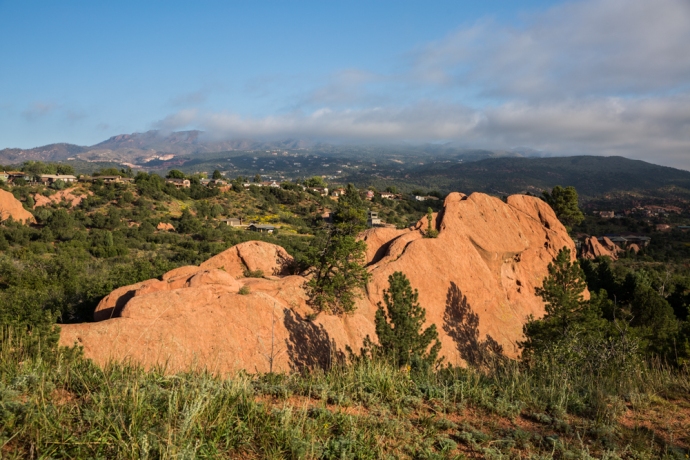 View from the Red Rock Open Space at the Garden of the Gods. 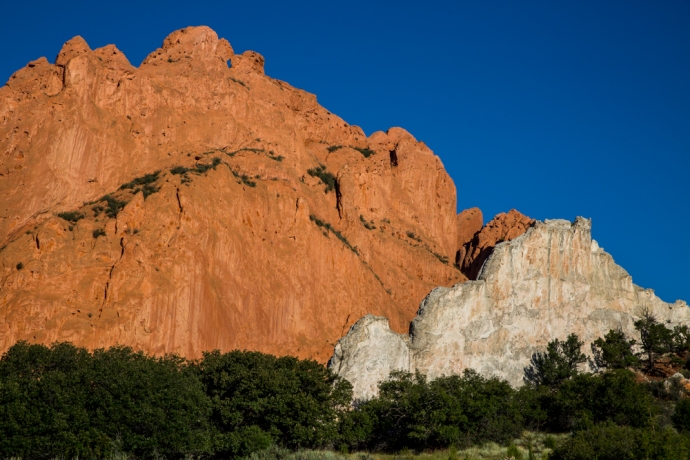 Differential erosion in the vertical exposed rocks create these stark contrasting outcrops.  Kissing Camels in the distance and White Rock.

The only way to really appreciate this place is to walk through it and around it, to become part of it, taking it in from different angles and in different light.  I was up at sunrise one day when it glowed in the dawn light.  The reds are redder against the bluest of skies.  There are miles of trails to explore and there are many rewards along the way.  Unique formations have names that reflect their morphology.  Kissing Camels, The Sentinel, Cathedral Rock, White Rock.  There are natural holes, arches and the precarious Balanced Rock. 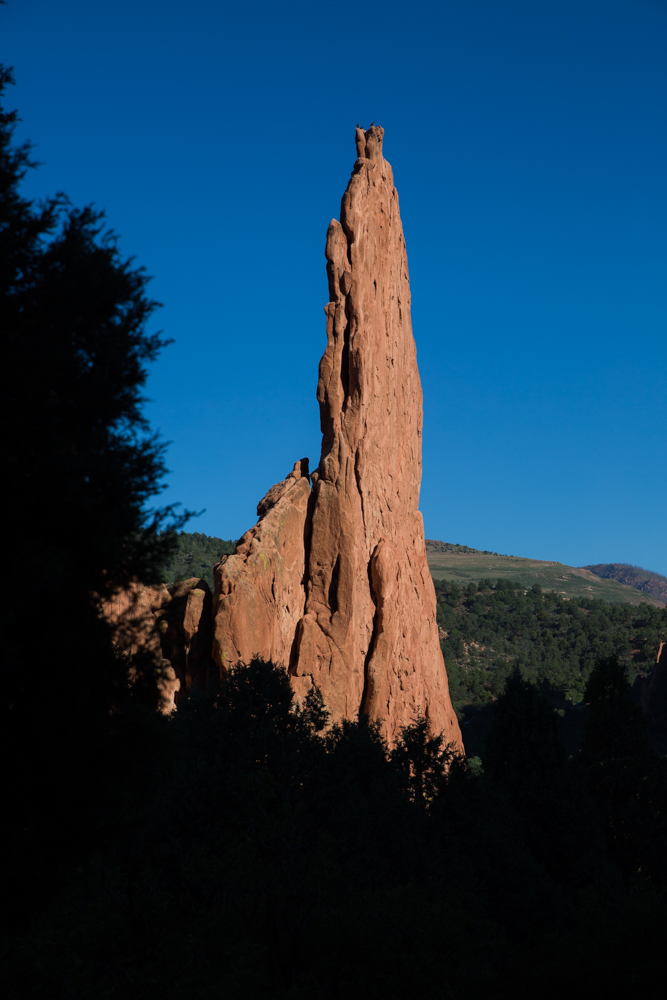 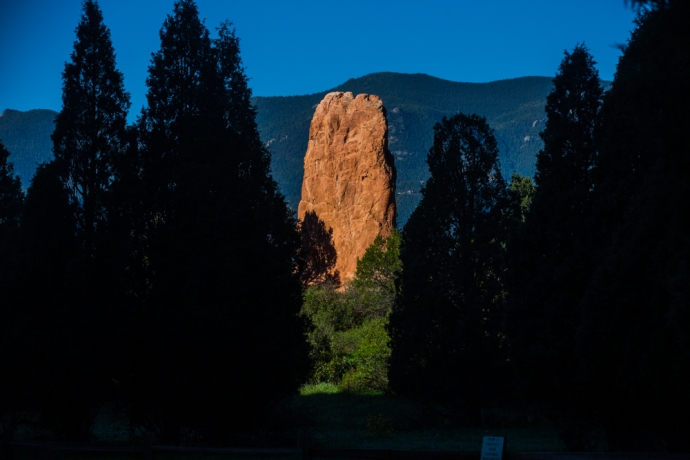 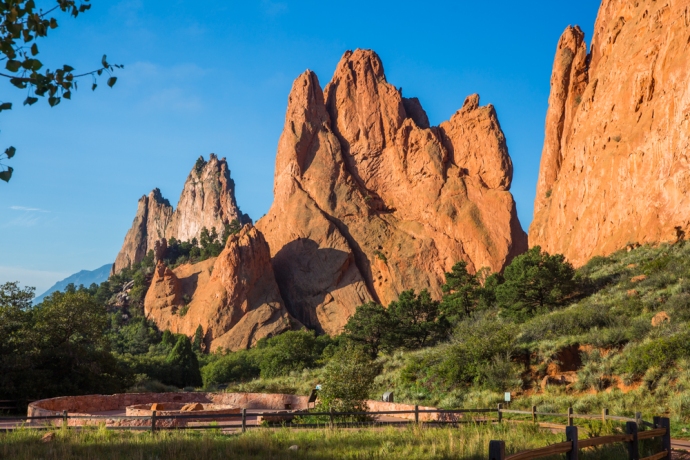 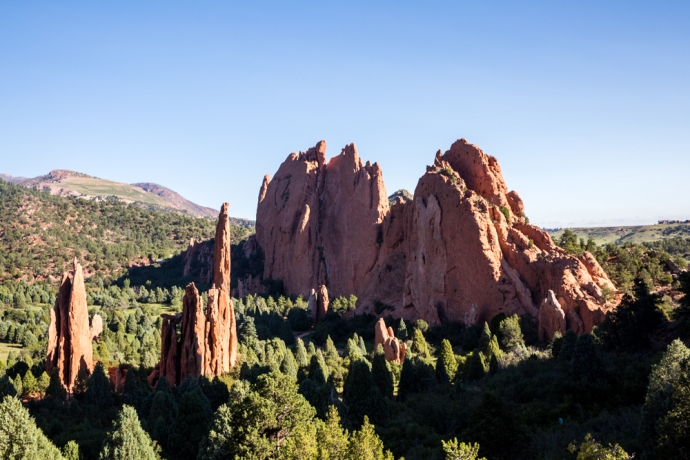 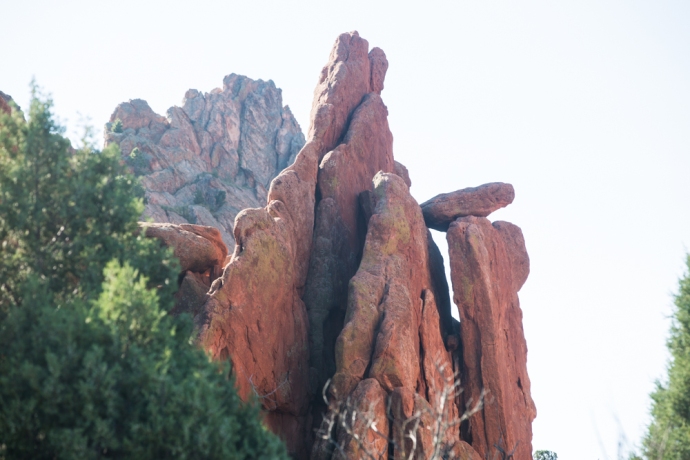 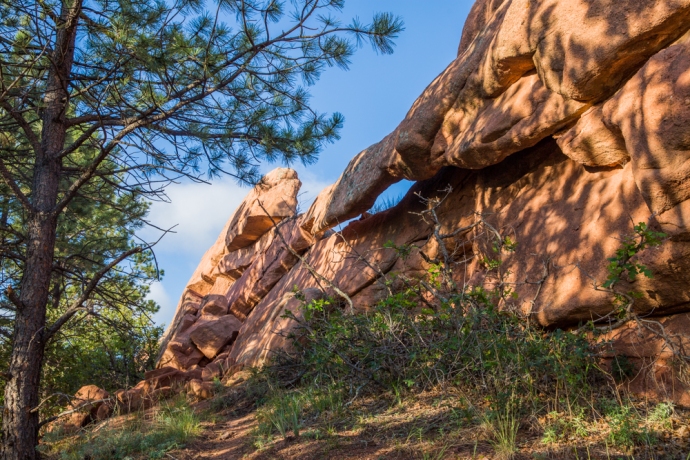 Of course the rock formations are its most obvious and spectacular feature but it is also a mighty challenge to the most technical of rock climbers.  Unfortunately I saw evidence that this activity is not always sympathetic to the natural and geological values of the area.  For example at the Sentinel is an excellent  example of ancient ripple marks insensitively defaced by a drill hole for for a climber’s foothold. 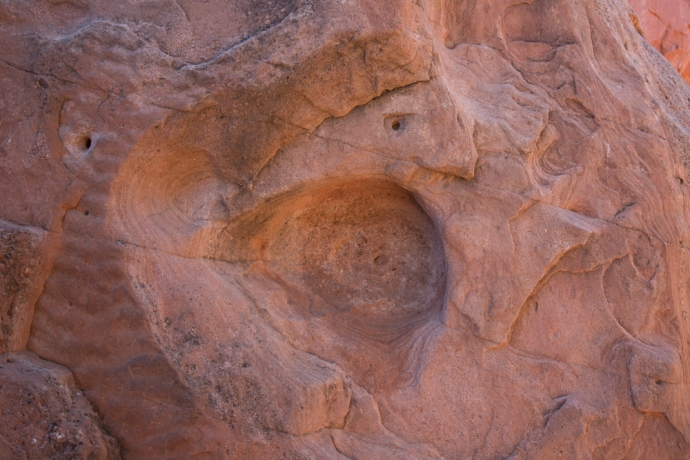 A rare exposure of ripple marks defaced by rdrill holes.

It is also a haven for wildlife.  I saw deer and a variety of birds, including what appeared to be hawks nesting high on a pinnacle. 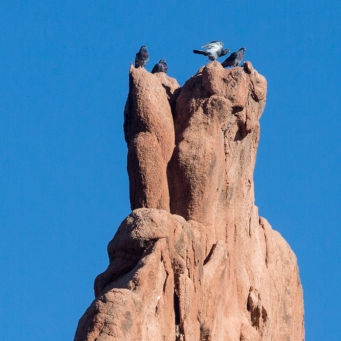 Hawks nest on the top of a rock 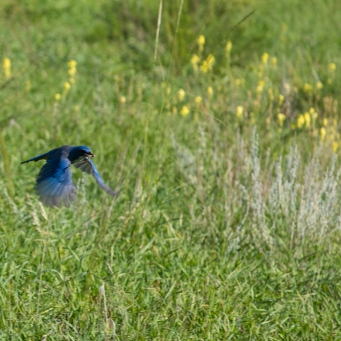 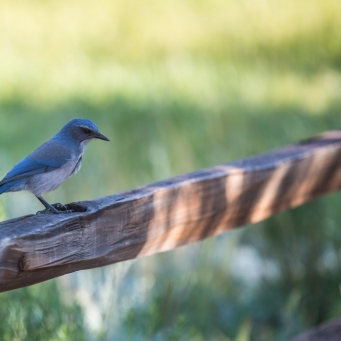 The same scrub jay having a rest

The special nature of the place was recognised by the early landowners, most notable among them Charles Perkins, whose family, on his death in 1909, gave their land to the City on condition that it would be a free public park.  That promise has been honored for over a hundred years.

We should be grateful for the foresight of these people, who recognised something that needed to be preserved and shared so that today it is one of the most visited parks, and one of the most loved, in America today. 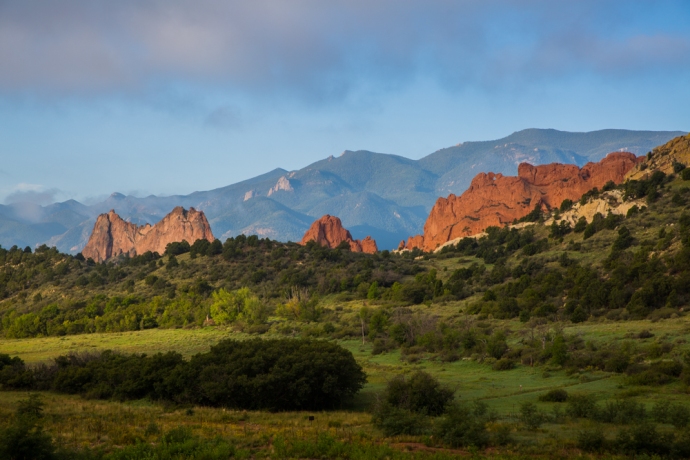