Off to Offaly. What’s it Offer Me?

The Midlands of Ireland gets a bad rap. It comprises the counties of Laois, Longford, Offaly and Westmeath. Major towns are Athlone, Mullingar and Tullamore.  The whole Midlands is unfairly seen as a cultural backwater, dreary and nothing but boring bog land.  Author and Irish Times columnist Michael Viney has described the Midlands as “a wearily protracted obstacle between Dublin and the west … a slow ticking-off of dull little towns on a lot of flattish land drained by sluggish rivers”.

At the invitation of a friend, Christina,  who owns a B&B in Kinnitty,  Co. Offaly.  I spent a few days seeing for myself.

And I say this characterisation is unfair. Yes there is plenty of bog land but in my four days, mainly in Offaly,  I found music every night, discovered the Slieve Bloom Mountains, enjoyed a fine meal at Castle Kinnitty, absorbed the Georgian architecture in Birr and walked through a sculpture park in Lough Boora. I met plenty of lovely people as I have everywhere in Ireland.  Offaly had plenty to offer me!

I stayed at beautiful Ardmore House.  This elegant grand house, now a B&B, was built in 1840 by the Bernards who lived in the nearby Kinnity Castle. More on that later.  It was used as a doctors’ surgery and residence until the 1970s.  It had various owners after that and was bought in a run-down state over 20 years ago by Christina who has restored it in a  labour of love.  Set in lovely formal grounds and with huge bedrooms fitted with period furniture.  There is a wonderful ambience about the place and views from every window over the rolling hills on the edge of town and beyond to the Slieve Blooms.   http://www.kinnitty.com/about.html.

This was my base from which to explore Offaly. And I didn’t have to go far.  Across the road near the Church is a stone pyramid, a mausoleum for members of the Bernard Family.  It was built in 1834 and houses the remains of six people including one bitten by a rabid dog.  The stone work is wonderful with blocks laid at an angle to get the pyramid shape.  The  mortar pattern is etched through the steel door which gives a great senses of unity.  The last internment was in 1905. 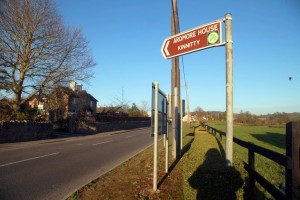 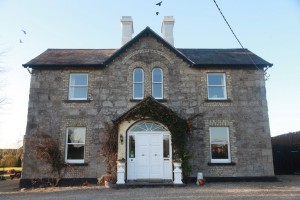 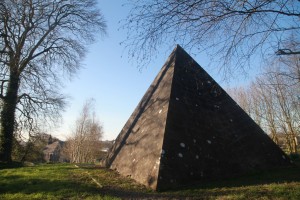 Anyway I digress. The main reason I came of course was to play music.  Wednesday nights sees a regular session in this part of the county.  It is led by the talented Kinsella family and rotates between four pubs in surrounding villages.  This night saw the music at Bergin’s at Killoyn (pronunced ‘Killine’).  Other nights are at the Slieve Bloom in Kinnitty, Burton’s at Ballybritt and Dempsey’s at Cadamstown.

This is one of those sessions that exists soley for the community.  The pub was packed with regulars who were there just for the music. If there are tourists then they either come by accident or they are directed here by their hosts.  I am told that on other nights this pub is nearly empty.  This is a clear sign that the music is strong here and that people are into it.  While the quality of the music may be better in Clare you can’t argue with the enthusiastic way it is played and the reception it receives.   There were about fifteen musicians of all ages but as the night wore on many more singers were coaxed from the crowd. The tunes were well led by gifted box player Padraig Kinsella, and members of his family.  It is worth commenting here that the perception that Offaly is a backwater is belied by its successes in the All Ireland Fleadhs.  Players from Offaly including Padraig have won the All Ireland for button accordion eleven times, significantly more than from any other county.  I certainly didn’t appreciate this.  There was a lot of singing but no shortage of tunes and even after most of the musicians had packed up soon after midnight more singers came out of the crowd and we left at 2am with the session still in full swing. 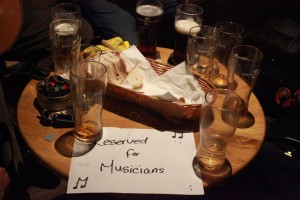 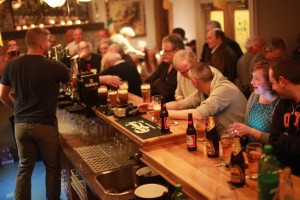 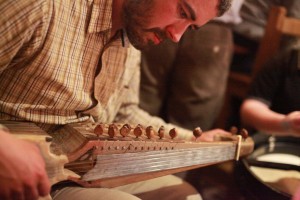 As my readers would know I attempt to play music every night.  So when we discovered there was a session in Eugene Kelly’s on Thursday off we went.  What I had forgotten, until I got there, was that this was the first place I had played music in Ireland, when I had arrived in May 2014.  I remembered meeting concertina player, Aoife Greene (another All Ireland winner) there that night and she was here again.  She recognised me even though I now have a beard and long hair.  Some great tunes followed and plenty of songs though the session was somewhat throttled by one member of the audience who insisted on sitting in the circle and making her presence well and truly felt.  Though in fairness she could sing.

On the last night Christina had organised a house session at Ardmore. Some of the musicians who I had met at Bergin’s were there and others, friends of Christina, had come from as far away as Westport in Mayo as well as some locals.  It was a privilege to be part of this.  Great tunes and songs, excellent food, fine whiskey and a turf fire. Only thing missing was some dancing and you could have been at a house session a hundred years ago. 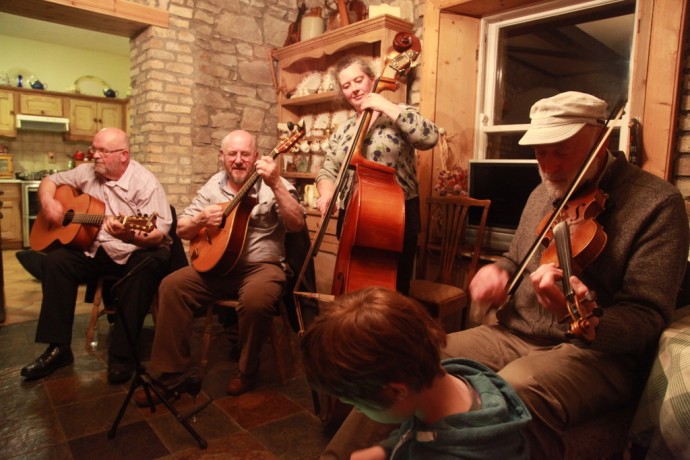 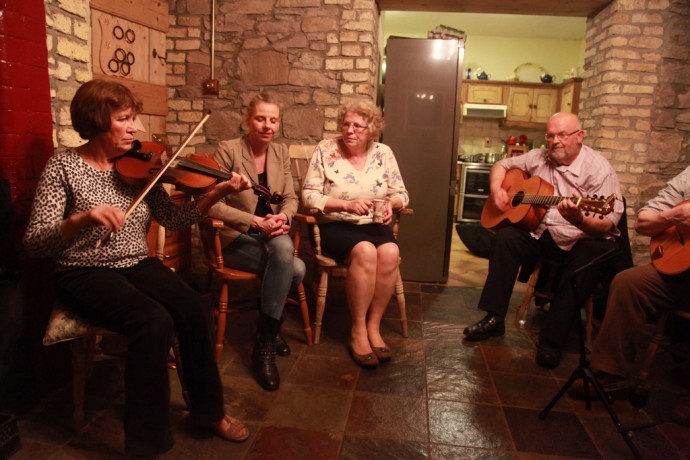 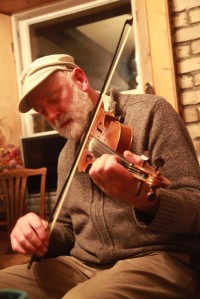 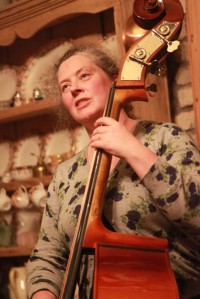 In between these sessions I got out and about.  The weather was stunning.  Clear blue skies and around 18 degrees.  County Offaly has the earliest evidence of human habitation in Ireland dating from 6500 BC at Lough Boora just down the road. There would have been lakes there then, long since turned into bogs and subsequently mined out by Bord na Móna (the company created in 1946 to exploit bogs mainly in the Midlands)  Here at Lough Boora however it is now returned to lakes and a nature reserve.  I visited there and took a short walk was through a sculpture park.  All the installations were inspired by the unique land and the bog and its history of mining.  I was very impressed.  Great opportunity for some photos a little different from what I was used to.  I really enjoyed trying my hand at something different. 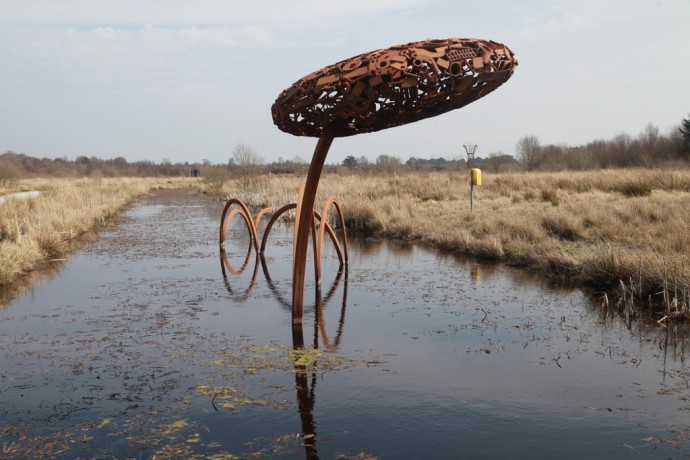 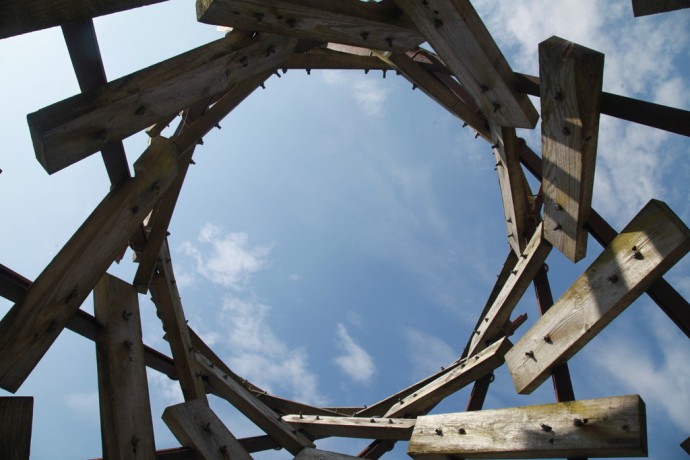 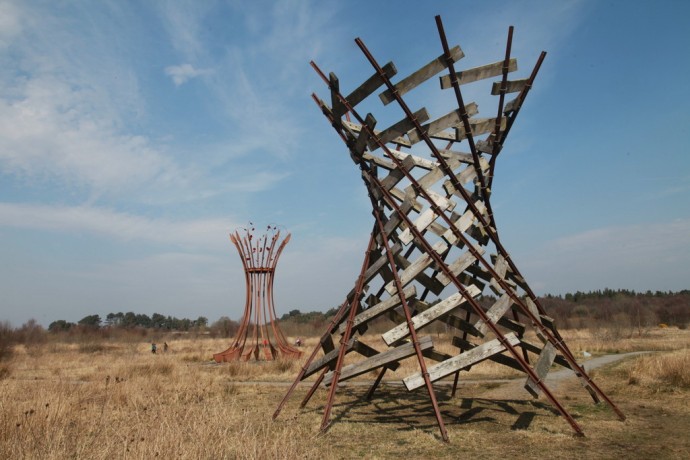 There was also the Slieve Bloom Mountain range.  More low hills actually but there were expansive views of the countryside .  It is renowned as the birthplace and early home of legendary Finn MacCool but I was more taken with the forests of pine and beech, just breaking out with the spring growth.  It was at that wonderful point where the trees still have that winter nakedness but there is a tinge of bright green from the new shoots. 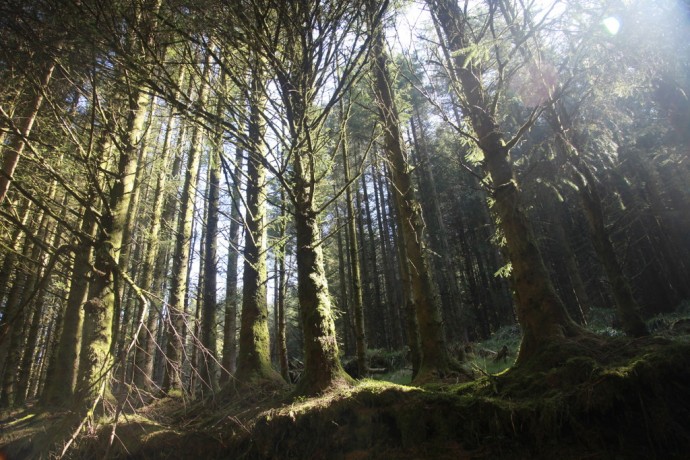 Kinnitty Castle has had a chequered history.  It’s current predicament is at least as bad as anything it has faced since the site was first settled.  It is worth relating briefly as reflects a lot of the story of Ireland.

The site was known to be an ancient druid ceremonial ground; it was a monastery in the 6th century with links to Clonmacnoise along with which it was a major learning centre in Europe at the time.  It was raided by the Vikings and then rebuilt by the Normans with a castle and Abbey.  It became the stronghold of the O’Carrolls around the 11th Century through to the 17th century.  A new castle was built by the O’Carrolls in 1630 and confiscated by the English in 1641.  In 1664 it was granted to an English officer Thomas Winter. It was sold by the Winter family to the Bernards family in 1764 and became known as Castle Bernard.  The current look of the castle was a result of work commissioned in 1811.  The work was carried out by the Pain Brothers who built Dromoland and is a wonderful example of neo gothic architecture.

In 1922, the Castle was burned down by the Republican forces.  Rebuilt in 1928 by the Bernard family who lived there until 1946 when it was sold to Lord Decies who in turn sold it to the State in 1951. It became run down but was purchased by the Ryan family in 1994 and renovated and transformed into a luxurious 37 bedroom hotel.

The castle was forced into receivership by the KBC Ireland Bank and despite a number of attempts to sell it is still being run by the receivers as a going concern.  It is popular for weddings, understandably, and I have to say the steak was delicious.  The hotel is full of amazing period furniture, most of it huge and befitting the grand proportions of the house.  The bank seized all this along with the hotel but the Ryans claim that the effects are their own personal assets.  It is all very messy with legal action and accusations flying everywhere and as of now you could buy this special castle for a mere seven million euros and make the bank go away. 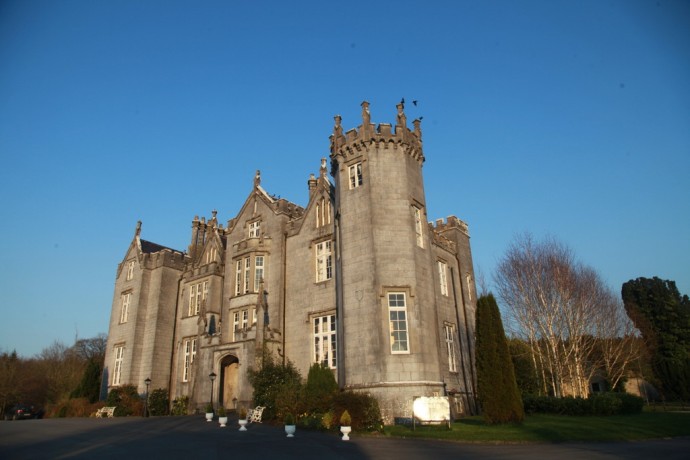 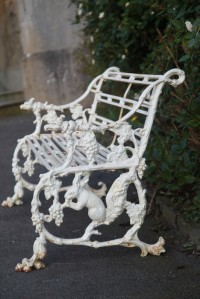 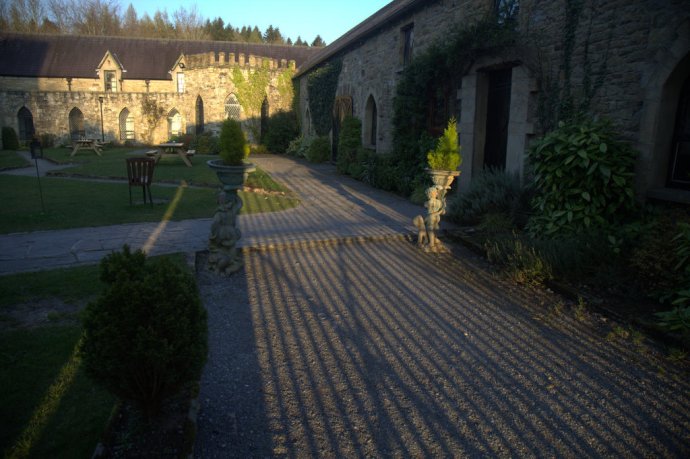 The English heritage is apparent in nearby Birr also.  Birr also has a magnificent castle which is the family home of the current Earle of Rosse, but goes back to the O’Carrrols again who had one of their castles there in the 15th Century.  In 1620 it was granted to a Sir Laurence Parsons in the course of the Stuart plantation, c. 1620. Sir Laurence Parsons built most of the structure of the present castle. But this was not the main attraction for me.

The town is well regarded for the excellence of the preservation of the Georgian architecture.  A walk down the main thoroughfare of Emmett Street (formerly Cumberland Street) and the Oxmantown Mall and St John’s Mall give ample evidence of this.  I was taken with the elegance of the buildings and the unity of streetscape which was a defining characteristic of Georgian city planning There were simple family homes and there were clearly more ornate, but still conforming to the same simple elegant ethos, homes of the wealthy.  I loved the arched door treatments, the fanlights above the doors, the beautifully proportioned multi-paned windows and some of the less noticeable details such as the cast iron gate handles.

I was walking down Oxmantown Mall photographing the front of a blue doored two story mansion when the owner came out.  We got chatting and retired vet, Sam Glendinning took me through the archway which accessed the back and showed me his formal walled garden.  He was in the process of renewing it as it had become overgrown but there was enough to see what a marvelous space it was. A magnolia in flower was a feature with a central lawn and garden beds and trees around the boundary.  It was so quite; not a noise though we were right in the middle of town.  I was entranced.  Sam said it may be for sale if he could convince his wife to move into something smaller but he wouldn’t name a price.  Out of my league I would think.

Other claims to fame of this town are the largest telescope in the world built by the then Earl of Rosse in 1845.  (Why build a telescope in Ireland where there averages up to 225 days of rain a year?), the world’s first auto fatality when Mary Wood was thrown out of the steam car she was a passenger in as it rounded a corner on Cumberland Street and an Australian connection where Dame Nellie Melba sang from the balcony of Hotel Dooley, an event remembered today with Melba’s Nightclub 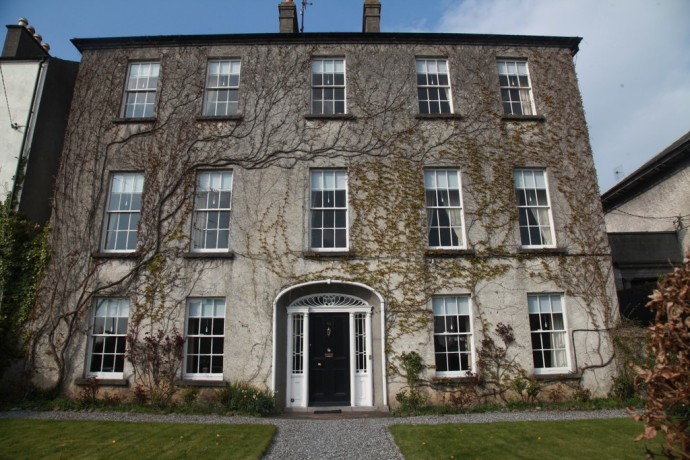 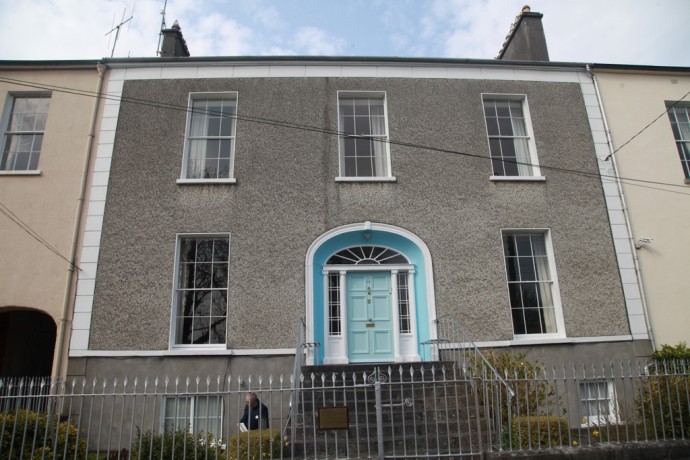 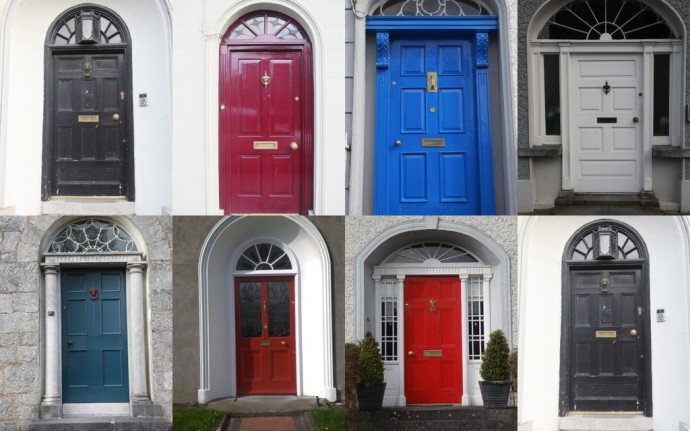 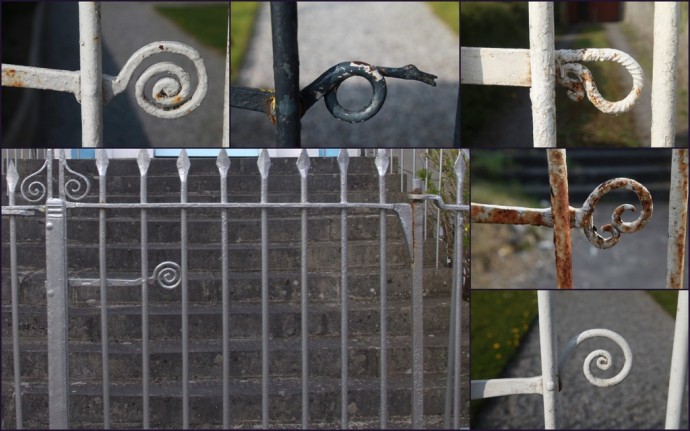 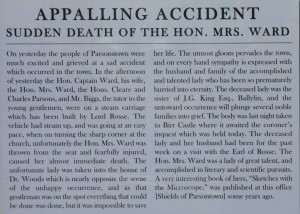 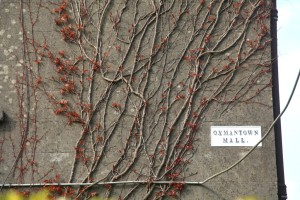 I left Offaly on the Saturday and as if to say goodbye the weather broke.  I enjoyed my time there and thanks Christina for your hospitality.  It didn’t take long though and Saturday night I was back in the swing of things with tunes at Friels in Miltown with Yvonne Casey, Josephine Marsh and John Joe Tuttle.

6 thoughts on “Off to Offaly. What’s it Offer Me?”