Springboard Fiddle Retreat 2018. A Dive into the Unknown.

I had high expectations. An intensive four days of workshops from Caoimhin O Railleagh, Four nights of ‘luxury’ on the shores of Bantry Bay. Meals. All the ingredients were there. Food, fellowship and fiddle.

Would my expectations be met?

I am a bit of a workshop junkie and I am guessing that over the past four years I have had instruction from well over forty different fiddlers while living in Ireland. But Springboard Fiddle Retreat sounded different. Workshops in Ireland generally follow a set pattern, in place since the Willie Clancy Festival started nearly fifty years ago. Bring in a name fiddler, for up to a week. Three hours a day; usually a mixed class of fiddlers or wanna-be’s of all ages and stages. The teaching is based around learning new tunes but there is rarely time for individual instruction or to gain a deeper understanding of the instrument.

But Springboard did not follow this formula.  As I said it is residential and there were only a dozen of us.  It was a Thursday afternoon and fiddlers from all over Ireland, a couple from Scotland and from the  US and a couple of ex-pat Aussies joined others at Linden House on the shores of Bantry Bay in West Cork.  The location was hard to find but stunning.   I have separately blogged on this little corner of Ireland and the beauty of Glengariff and the surrounding forest, so you can see more HERE.

The calm waters of Bantry Bay at Glengariff

But it wasn’t just the location. The house was purpose designed to accommodate up to 20 people. There were two wings and multiple stories and it made a beautiful architectural statement as it stepped its way down the contours of the land melding into the forest and surrounded by beautifully tended gardens and tall gaunt oaks.  There were a number of large living spaces with giant picture windows taking in the vista and plenty of nooks to meet and play fiddle in small groups or withdraw for some quiet time. Everything was provided for a wonderful livable escape.

Linden House.  The venue for the retreat

The view from the main living area 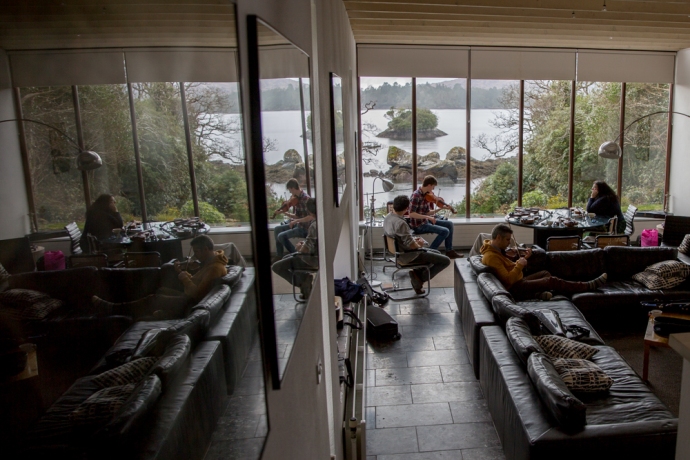 A perfect place to think, read, and play.

Then there was the food. Oh dear. Expectations regarding this weren’t that high when I read it was vegetarian. Nothing against vegetarianism, but I will be honest, I do enjoy the  meat-and-three-veg world . But as it turned out absolutely nothing to worry about here. We were incredibly well looked after by chef Jenny and her assistant Anda. The food was truly a marvel. It was prepared with great thought and obvious love. A riot of colour and flavours with some ingredients I have never even heard of and others used in ways you wouldn’t have imagined.  All combined with skill and originality. The food was indeed part of what was a total experience We were constantly reminded of the parallels between our explorations with music and the eating experience. Each day one ingredient was chosen as a theme and dishes reflected different and sometimes surprising approaches to the use of this. Just as we would choose a theme for the day on our journey with the fiddle. 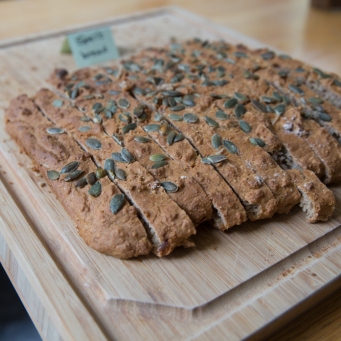 Speaking of the fiddle that’s what we were there for, so let me talk about that.

Caoimhin is an accomplished and widely respected traditional Irish fiddler. His collaborations are many and include musicians from wide backgrounds such as piper Mick O’Connor, West Kerry box player, Breandan Begley,  sean nos singer Iarla Ó Lionáird, Clare fiddler Martin Hayes and musician/physicist, Dan Trueman.  He plays with The Gloaming.  His music is rooted in the traditional world of piping and Sliabh Luachra but he has explored Norwegian and Icelandic music, the Hardanger fiddle and plays in various cross tunings.  He has always been seeking new ways of voicing the fiddle.  As a result he has developed a unique and recognisable playing style.

Instructor Caoimhin O’Railleagh as a snow shower passes through

Very quickly I realised this fiddle workshop would be different. Caoimhin is a brilliant, relaxed and engaging teacher with an innovative approach. The time available and the ambience allowed plenty of space to explore concepts that were very new, to me at least. We spent little time actually playing. But always new concepts were put in the context of playing traditional music. We spent a day on cross tuning. For myself I stuck with GDGD but others went off in all directions. Indeed people were playing together with wildly different tunings producing surprising outcomes. There were no boundaries. We were encouraged to play tunes we knew opening up new possibilities and to then try our hand at composing melodies. 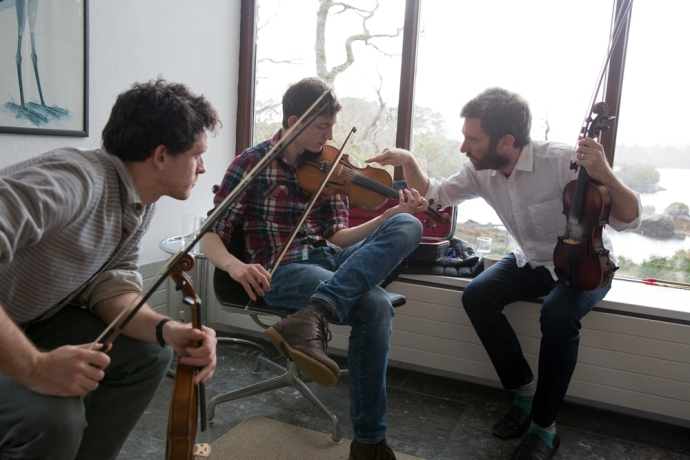 Another day we looked at tempo and the concept of expanding and contracting time. We were introduced to the Cyclotron, software by Daniel Trueman, that enables you to vary the space between notes within a tune and ultimately the rhythm and feel. We looked at discovering amazing sounds by exploring the real estate of the fiddle and the bow. We looked at difference tones – notes that only exist in the mind, and we looked at poly-rhythms. 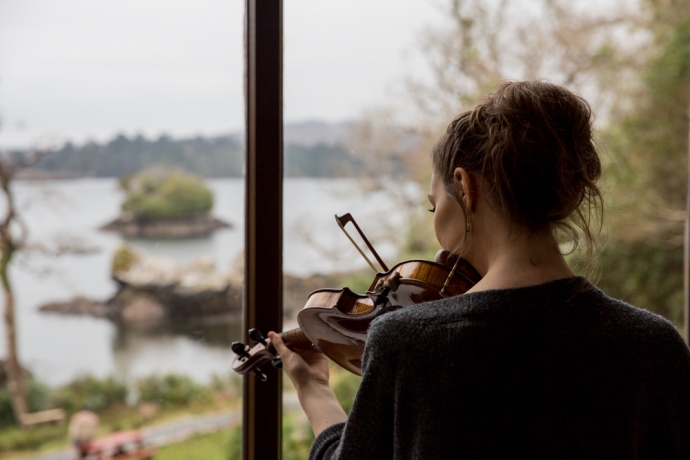 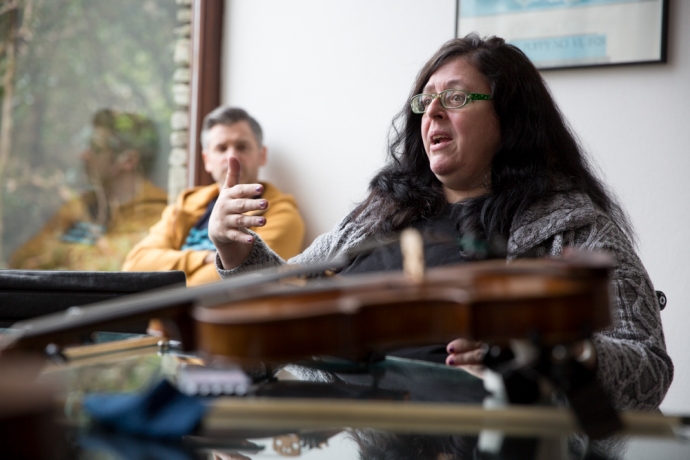 Sounds heavy but it wasn’t. There was were five hours each day of classes, but it went so quickly.  And it wasn’t all work.

Afternoons were filled with activities; organised or less-organised. There were ad hoc workshops including ‘dalcroze eurythmics’, yoga, role play games or you could brave the cold (it actually snowed one day) for a swim with the seals. Or you could just go off and practice.

A quiet place to play 1

A quiet place to play 2

A class in ‘dalcroze eurythmics’?

Or time for a dip? 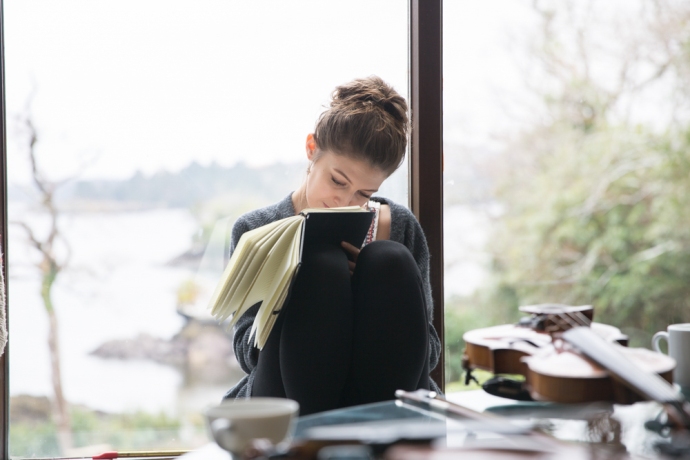 Jotting down some wise words.

The evenings sometimes went in surprising directions; activities including table rugby and games that totally messed with the brain in quite different ways.

Ireland vs the Wallabies in Table Rugby.

A highlight was the Dining in the Dark experience. On this occasion we were treated to a wonderful five course degustation menu prepared and presented by Jenny and Anda, who were the only two ‘sighted’ residents of the house for the night. There were plenty of surprises with our taste buds made keener by the darkness.  A butter tasting. Who would have thought? Kale served three ways. A colcannon to die for. A sweet dish which baffled me but turned out to be carrageen pudding and a cheese plate highlighting how good Irish cheese actually is. The meal was interrupted at one point by a spellbinding soundscape of wild fiddle from Coaimhin the sound coming from everywhere as he strolled around the house. Then there was what seemed like an eternity of silence. This was brought to an end by tentative noises made by just one or two at first but then by the full ensemble with whatever came to hand, ultimately turning into an untamed cacophonous symphony of sound and noise of Dada-ist proportions rising out of the darkness.

It is hard to quantify what one gets out of such an experience. I didn’t learn any tunes. There were no sessions in the traditional sense. But I didn’t come for that. What I did get were immeasurable experiences of sharing music and musical thoughts, new ways of looking at timing, rhythm and tone, An insight into new paradigms of playing music and lifetime friends.

A true springboard.  Definitely a dive into the unknown.

The Springboard Fiddle Retreat was held on 15th to 19th March 2018.  Check their site http://www.westcorkmusic.ie/retreats/springboard for info on 2019. 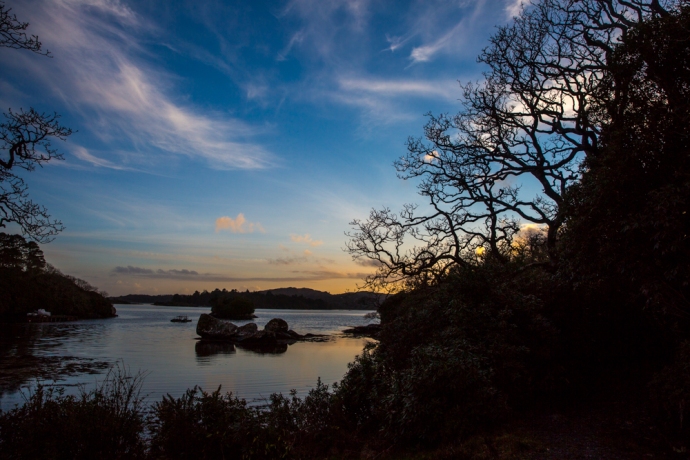 Glengarriff sits on the upper reaches of Bantry Bay in West Cork. I was lucky enough to spend five wonderful days there last week at a Fiddle Retreat and was able to closely observe the various moods of this sublime waterway. I never actually visited the village of Glenngarriff itself, as my accommodation was tucked away on its own private estate behind the golf course; so private and so quiet that in the time I was there encountered not another soul. other than my fellow residents.

Join me on a walk through this blissful elysium. 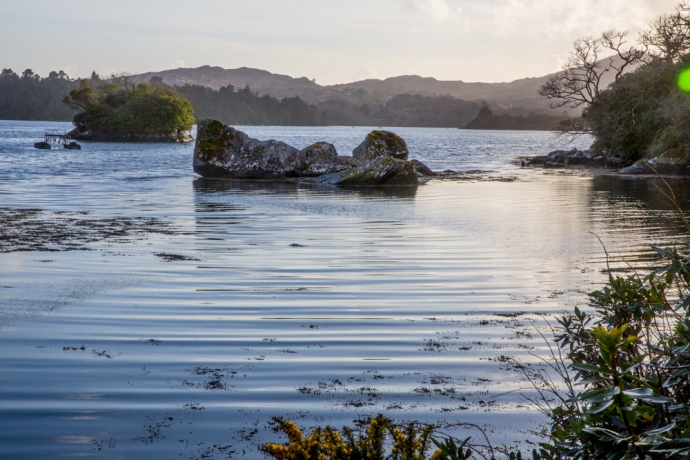 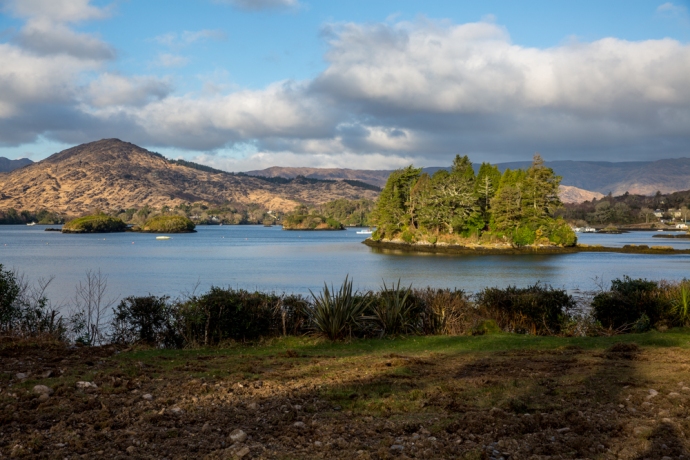 A perched forest I

The surrounding forest of magnificent oaks birches and conifers has (where the rhododendron hasn’t taken over) a primeval under-story of forest detritus draped with mosses, lichens and ferns, in places forming a vivid green carpet.  There is a bubbling stream of crystal clear water that snakes its way down the steep slope into the Bay, cascading over the smoothed rocks and falling into occasional, inviting, pellucid pools. 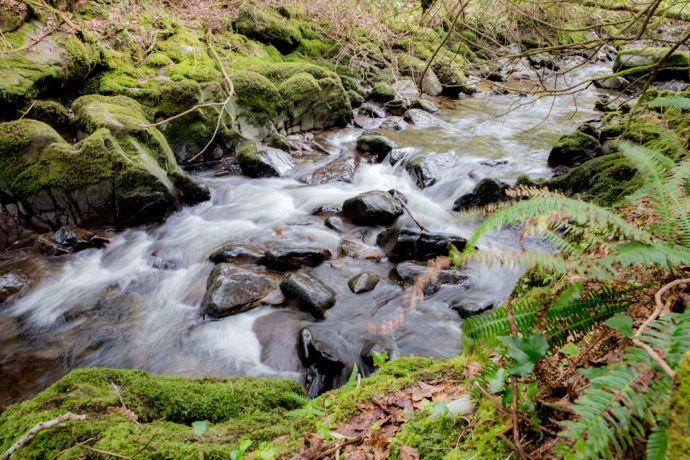 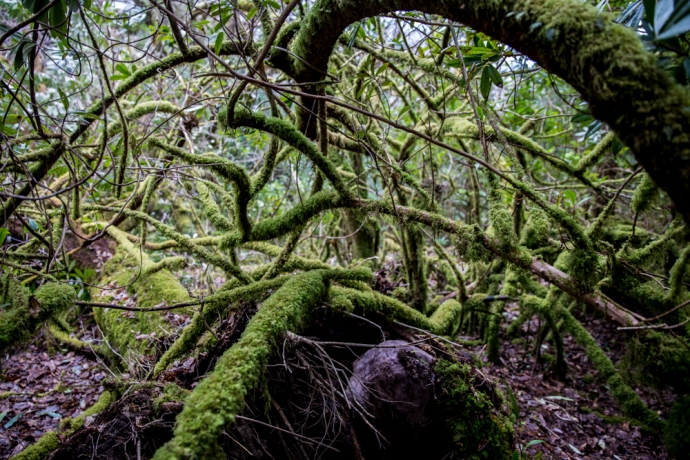 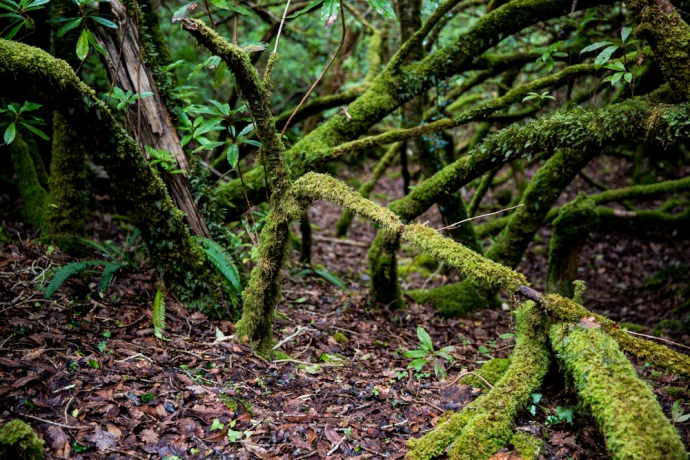 Azaleas and camellias add colour.  This is only March and the rhododendrons can’t be far away from joining in.

You regularly sight seals cavorting on the shore.

A cavorting seal I 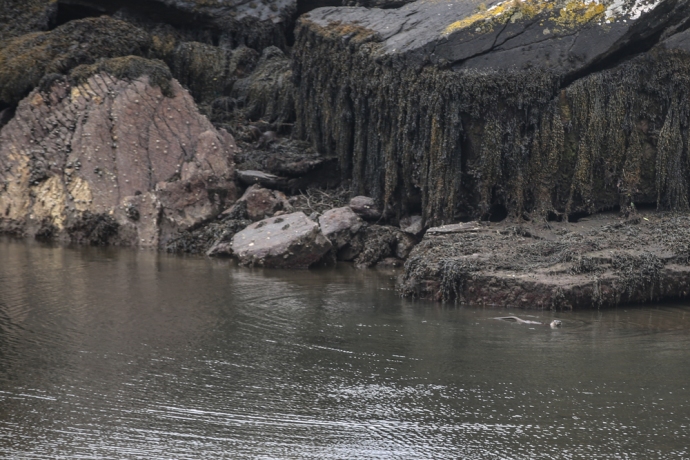 The scene was ever-changing. One moment bathed in brilliant sunshine, then heavy cloud.  Frigid weather brought some light flurries of snow flakes drifting to the ground but not settling and then blue skies brought out the singing birds.  A Great Tit in an oak tree near the house harmonising with the sweet sounds of the fiddle coming from inside. 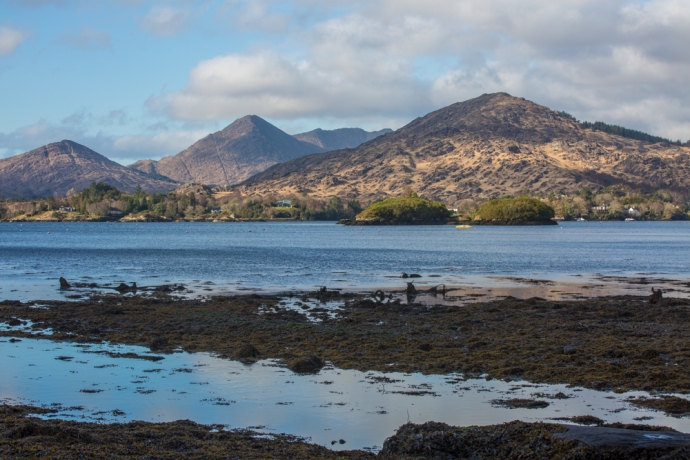 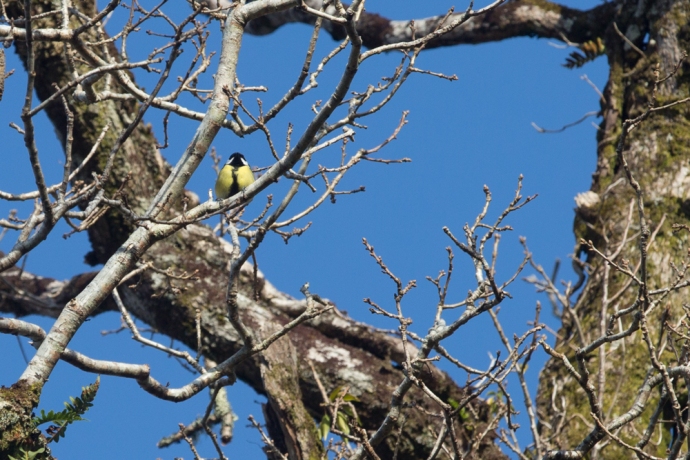 The sun brings out the birds.  The Great Tit.