It was Saturday and I was going to stay home and practice fiddle but  when I looked out the window I saw blue sky. And you have to take advantage of every such day with the Winter SADS not far away.  With Donald Trump on my mind after reading some anlysis of the debate (why do I do this to myself?) I thought I would go and have another look at where he wants to build his new Irish wall.

Doughmore is the location of Donald Trumps Doonbeg Golf resort, It is about ten minutes drive south of my little cottage near Quilty. So you see it’s pretty much my backyard.  You follow the signs with the blue squiggly line because the Wild Atlantic Way actually diverts to the beach.

Trump bought the impressive resort and golf course at a knockdown price of $12 million when the then owners were in difficulty.  An astute purchase?  Of course.

For those who are not aware, he now wants to tip 200,000 tonnes of rock along nearly 3 km of the beach (that’s a public beach mind you) to build a massive wall up to 4.5m high to stop erosion of the dunes to protect his golf links.   A little bit of science.  Erosion of dunes during a storm surge is a natural event. The event that scared Mr Trump happened in February 2014 and the dunes were cut back around 10m. This was a once in a lifetime happening that caused millions of euros of damage all along the Clare, Kerry and Cork coasts. But hey, erosion of dunes is essential for the replenishment of the sand to the beach. It is temporary as the sand returns to the dunes through wind. That’s how the dunes got there in the first place.  The Dutch understand this and monitor the normal movement of dunes as a natural barrier to inundation of the lowlands. A rock wall will destroy this continuum. Trump proposes to spend millions to save a couple of greens. Well stiff I say. Spend the euros on new greens and fairways. Leave the beach alone. 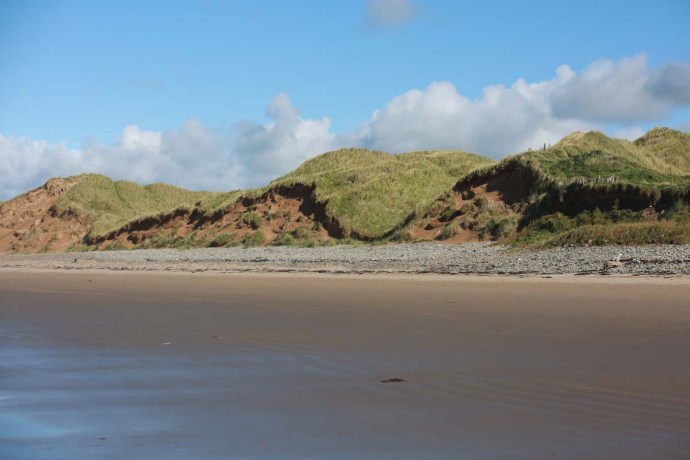 Doughmore Beach.  200,000 tonnes of rock planned to be tipped against these dunes.

So my visit this day is to see what’s at stake. And see it before it disappeared under a pile of rock.

Oh, and did I say that these dunes are classified as a Special Area of Conservation by the EU.

I was struck immediately by the relatively unspoilt nature of the beach. At the southern end where the resort complex is located is a rock platform, unusual because the shales are steeply dipping unlike most of the Clare coast where the strata is flat lying.  From here a beautiful sandy beach stretches around the bay for about 3 km. In the bright sunshine it is stunning.  The resort stands proud of course but the golf links is tucked away out of sight.  The impression is of pristine wilderness.   I found plenty of reasons to leave the beach as it is. 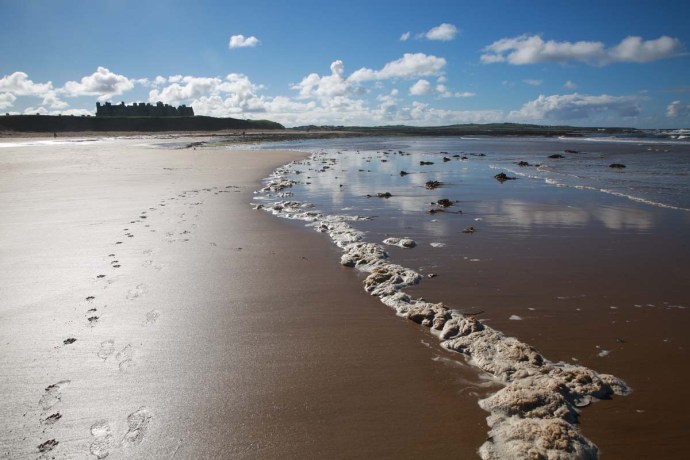 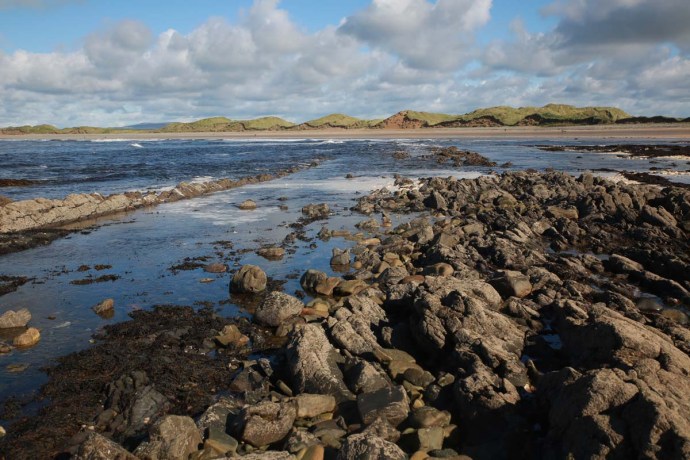 Doughmore Beach.  View towards the north. 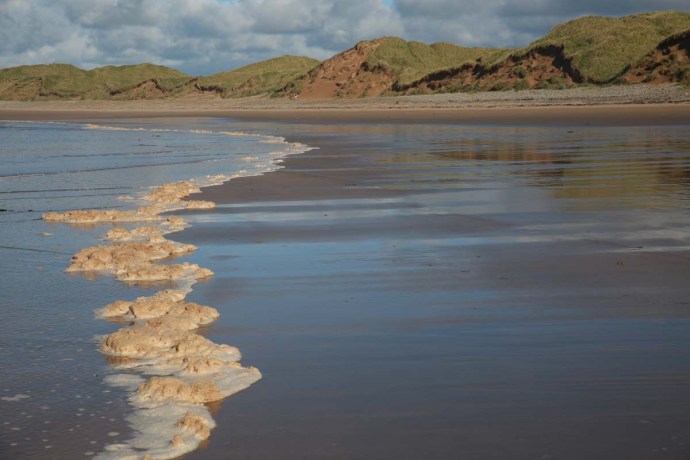 It is very wide and predominantly sandy with only a narrow zone of boulders at the base of the dunes as distinct from many beaches in the part of the world which are boulder rich. This day there were many using the beach but paradoxically it seemed empty.  Most were just Irish families not people from the resort. I  spoke to quite a few. There was a family walking their Labrador, which, by the way, was having the time of his life. Another family, home from Australia, building a sand castle, people walking, jogging and just sitting and staring towards the Cliffs of Moher, visible as clear as a bell in the distance.

There was plenty of bird life. I saw a pair of Oyster Catchers going about their business along the shoreline, there was a Grey Heron and a flock of Mute Swans, really a surprise to see them on the ocean. Could have watched them for hours. A bit of Tchaikovsky would have been perfect.  Perfect synchronicity from one pair as they performed a pas de duex for me. 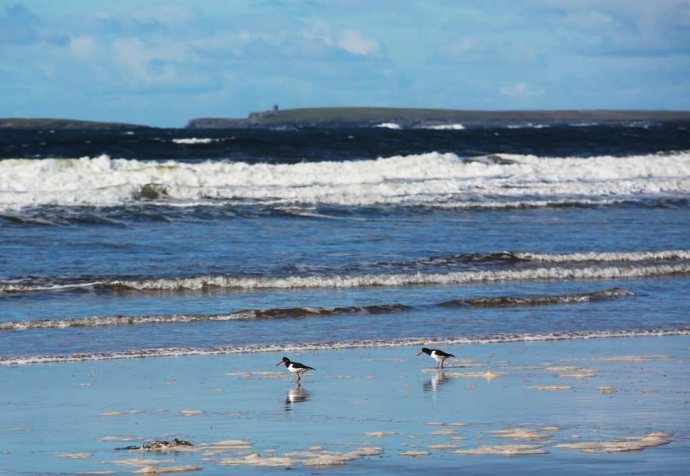 Doughmore Beach.  A pair of Oyster Catchers.  Looking towards Liscannor and the Cliffs of Moher.

Doughmore Beach.  A Grey Heron with the Cliffs in the distance.

Doughmore Beach.  Part of a flock of Mute Swans. 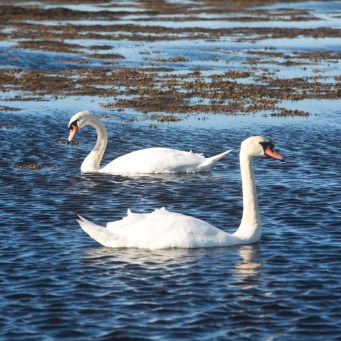 Swans at Doughmore. Perfect synchronicity I

Some kind folk pointed out to me a Portuguese Man o’ War washed up on the beach. Alive mind you.  A very rare occurrence as they are usually found in warm water in open ocean. A few have been spotted recently along the west coast of Ireland. So there is a bit of an alert out for them. They are related to the famous Australian blue bottle which though not as deadly as the Man o War, stings upwards of 10,000 people on Australian beaches every year. They are a beautiful and fascinating creature. Not actually a jellyfish, they are a colony made up of a number of different specialised individual animals (called zooids or polyps). They are attached to each other and to a bladder which is inflatable. The bladder, which is filled with gas, has intricate patterns etched in pink and the polyps and tentacle are shades of purple and cobalt blue. They have extremely long and venomous tentacles which is for gathering food and defending itself. They are at the mercy of the ocean currents and travel in schools of over 1,000. So keep a lookout. And don’t touch. 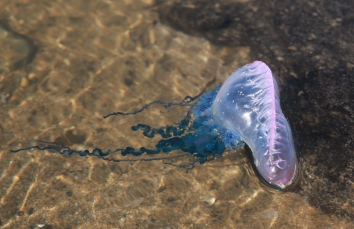 I noticed a small patch of peat exposed on the beach. This part of the beach is littered with old timber and tree stumps and roots. Part of an ancient drowned forest such as was revealed near Spiddal after the February 2014 storms. I’ve seen this before also at Caherush, though that one is now covered over again. Here there is very little of the peat exposed and it is is very narrow (less than a foot thick) and is clearly eroding fast.  It sits on a bed of quite soft mudstone which was the original forest soil layer. The stumps with roots attached many in situ and upright with the roots extending into the substrata. Chances are this represents an old forest from around 4-5,000 years ago, most likely inhabited. Most of the stumps appear to have met with a natural end, but I did notice one which had a definite saw cut – evidence of timber harvesting? This is amazing; they had saws back then? I can think of no other explanation.  This is a remarkable and unheralded window into the past.  Unfortunately it won’t be around long I’m guessing.  Not Trump’s fault this one, just the forces of nature. 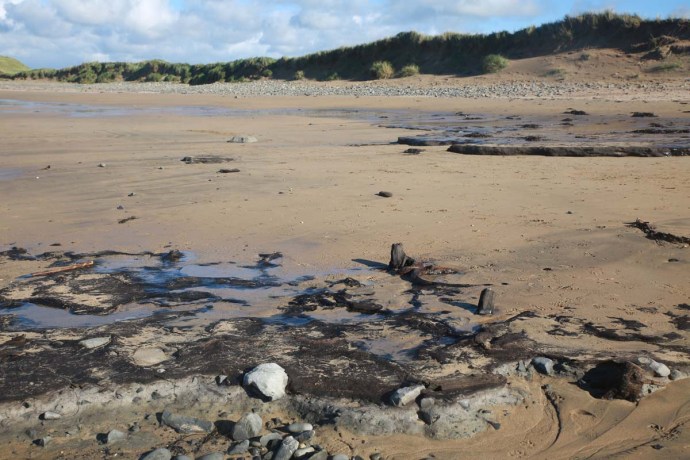 Doughmore Beach.  Part of submerged forest and remains of peat layer.  Grey rock underneath the peat is original soil layer of the forest. 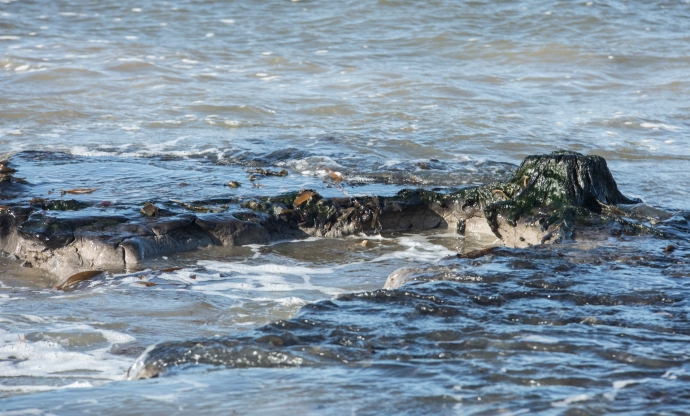 I have to go back to that accursed wall. This is not his first attempt. Trump began to dump boulders along the beach soon after purchasing it, without any permits, before Clare County Council intervened and forced him to stop the work. Then he came up with a relatively benign solution which had the support of environmental groups. No this was too namby-pamby. He changed his mind, sacked the very experienced consultant and hired another who would support his now much more drastic proposal. It is currently before Council. Trump firstly applied to bypass the council and declare it a project of national importance (the nerve!). This failed and Clare Council to its credit has initially rejected the application and is seeking more information on 51 questions. This will take many months. Trump’s bullying tactics have so far not helped. We will watch with interest.

I urge everyone who reads this to go visit Doughmore and see for themselves. If you live overseas and intend to visit Ireland, it is a short drive from the Cliffs of Moher and is on the way to the Kilkee cliffs and Loop Head anyway (which should be on your list of must-see places). Hopefully it will all still be there when you come. 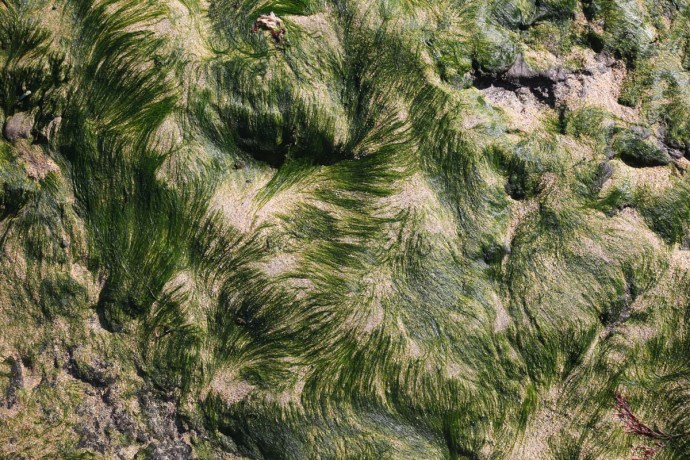