Dursey. An island at the end of Ireland.

Dursey Island lies at the end of the Beara Peninsula in West Cork. It has been inhabited since antiquity and though it lies only 200 m from the mainland it has always been one of the most remote and inhospitable places to live in in the whole country.

Dursey Island looking towards the mainland.

It had a tortured early existence and was the site of one of the most horrific events in Irish history.  Following the Battle of Kinsale and the defeat of Donal Cam O’Sullivan at Dunboy in early 1602, the English moved to clean up the last of the rebels.  Many of the O’Sullivan Clan’s non-combatants had been sent to  Dursey to keep them out of harm’s way.  An English force attacked the small garrison guarding the island. They butchered the entire population of the island, women, children and the garrison. Three hundred people executed on the cliffs and their bodies (some were still alive) cast into the sea.  O’Sullivan survivors from the whole of the Beara Peninsula, about 1,000 of them, then marched 550 km north to seek shelter from the O’Rourkes of Leitrim, but that’s another story.

As with the rest of the west coast of Ireland, Dursey suffered during the famine with a 30% reduction in its population in the 1840s.  Its subsequent and continuing depopulation reflects that of many other Irish islands but its survival displays the resilience and strength of its people. In 1860 the three villages of Ballynacallagh, Kilmichael and Tilickafinna,  a population of around 240 eked out a lonely life on the treeless but well pastured island.  By 1969 this number was down to 53. A feature of the island now is the large number of abandoned houses from these times.  This eloquently tell the story of a disappearing population, but they also give the island its remarkable character. 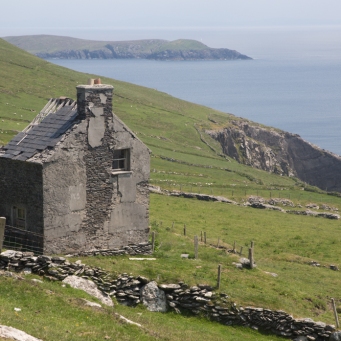 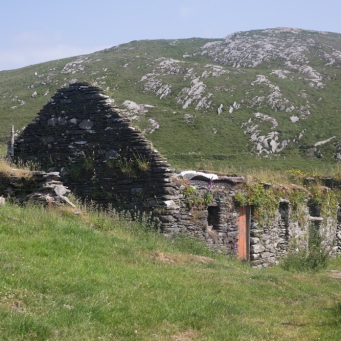 Up until 1970 the only way to get on and off the island was by boat across the channel.  A channel that could become so treacherous with storms and a tidal surge  that for a month and a half each year the island was completely cut off.  Considering that there was no electricity, TV, doctor, priest, food supplies and no hall or pub, life must have been very bleak indeed.   After much agitation from islanders the Government agreed to build a cable car to provide a lifeline and, while that did save it from the same fate as the Blaskets, which were abandoned in 1953, it did not stop the population drain until, by 2011, there were only three permanent residents.

Treacherous tides and surges made this channel very dangerous to cross.  Not these days. 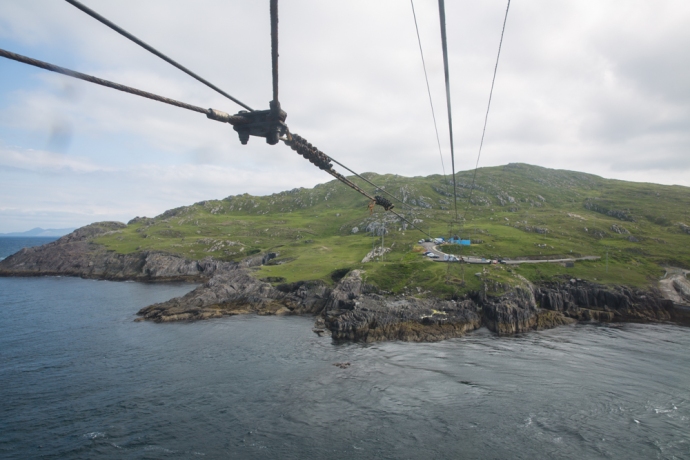 But the cable car opened the island to the tourist.  6.5 km in length, there is much of interest.

To walk the island takes at least 4 hours but I spent over 6 hours ambling and rambling, getting lost and finding myself again.  Just absorbing the ambiance and grateful for the glorious sunshine and the warm breeze that accompanied me. It is glorious to walk either along the sometimes paved road (which despite the alarming speed sign is almost devoid of vehicles;  I saw only one) or across the hills but best to stay on the marked paths unlike me.

There is a marked walking trail across the hills.  Looking across to the mainland.

If you leave the path walking through thick vegetation and across stone walls can be a challenge. 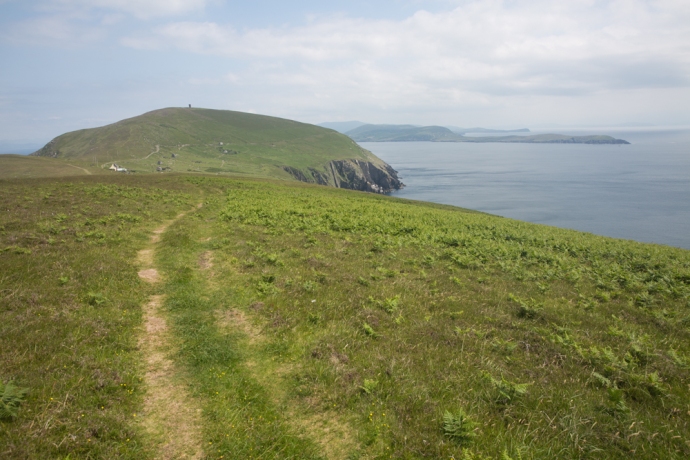 Looking from the western tip of the island back towards the mainland.  A signal tower stands on the highest point.

On your walk you will come across the remains  of St Mary’s Abbey, a Napoleonic signal tower, historic ruins, spectacular views, rocky cliffs, birds galore, native orchids and your best chance  in Ireland to see dolphins and whales.

Cliffs on the southern side of the island

At the western end of the island are three small islands.  Well, rocks really.  They are known as Calf Rock, Cow Rock and yes, you guessed it, Bull Rock.

Looking west across Dursey to the imposing Bull Rock, two miles off shore

A lighthouse was established on  Calf Rock in 1866.

Less than three years later a storm damaged the lighthouse.  This led to another tragic event in the saga of Dursey.  The Keeper, on Dursey, thought he saw distress flags and six boatmen were dispatched.  Those on the island were safe however, on the the return trip, the boat capsized and all six were lost

On 27 November 1881 in another  violent storm the the tower and lantern just snapped off above the steel base and fell into the sea. No one was hurt but it took two weeks to extract the four men stranded on the island. You can still see the base of the tower to this day. 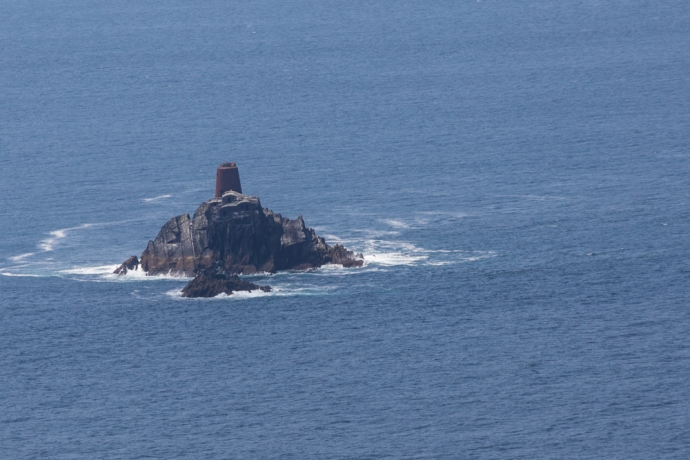 Calf Rock with the remains of the steel base of the light tower. Wrecked in 1881

To replace this lighthouse one was built on nearby Bull Rock, work commencing in  1882.  The light didn’t open until 1888.  It is worth pondering the challenge of constructing this on an island of precipitous cliffs measuring 230 m by 160 m and rising to 90 m above sea level.

The station consisted of an octagonal lighthouse tower, dwellings for the Keepers, and an oil-gas works.   This was a massive undertaking and the optic was the biggest in Ireland. 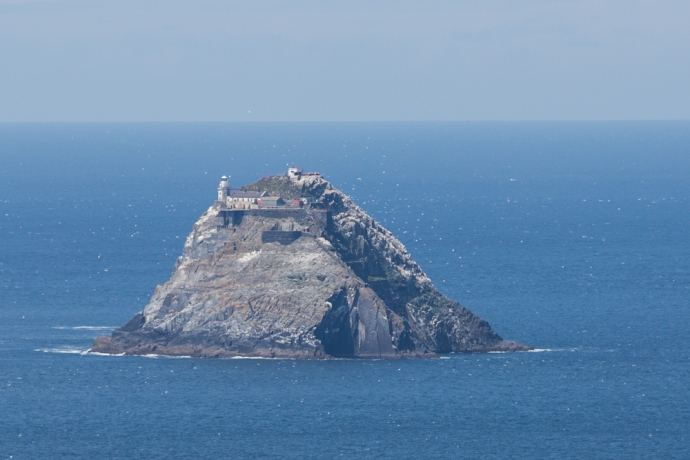 Bull Rock with its lighthouse.  You can also see a gull colony and the entrance to a natural tunnel that goes right through the island.

The light still stands proudly today though it was automated in 1991. The island is swarming with gulls.  Also noteworthy is a natural tunnel that goes right through the island.  You can see the eastern entrance in the picture above.

That’s Dursey.   Take everything you think you’ll need because there are no supplies on the island and not even a toilet. And it won’t always be mild and sunny as it was for me; go prepared for bleak and wild.

But don’t miss it.