Last year I wrote about the St Patrick’s day parade in Ennis.  This year I decided to stay local and I’m glad I did.  This was the real St Patrick’s Day.  Not jam packed with ‘Irish-for -the-day’, green Guinness- hatted parodies that you see in Sydney or New York but this was the Irish celebrating their culture on their soil on their day.

OK, there were green beards and flags and the like but it was Irish men, women and children dressing up so that somehow seemed OK and less jingoistic than in Australia on Australia day when it is just an excuse to get drunk and carry on like a pork chop.

There was something real about it, perhaps it was the rural setting of Miltown Malbay closer to the ‘real’ Ireland than Dublin or even Ennis.  And boy did they go to a lot of trouble.  All the local schools had floats with the obvious theme of 1916. All were dressed in costumes of the day and re-enacting significant events.  There were farmers, soldiers, nurses, politicians and it was so good to see the kids and adults throw themselves into it with gusto. Oh and plenty of guns.   There were vintage cars and there was around a dozen bikes.  Now that’s something you wouldn’t see in Oz,  with the hysteria around bikie gangs, but they got a giant cheer as they roared their bikes in unison drowning out the tin whistles and mandolins.

A couple due to get married at the Armada, one hour after the start of the parade at 3pm, became part of the festivities.  It was great craic and I am sure gave plenty of memories to take back to the States.  I’ve included a few photos.  By the way I was told they flew over from New York with 100 friends for the weekend!

Did I mention there were guns?  And  tractors!  Many of the pubs had a float as did many of the local businesses, the GAA, and some of the community organisations.  And there was plenty of Irish trad accompanying them.  Most of the pubs had musicians, there was music on the ‘gig rig’,  there was the guitar school and the students from Brid O’Donoghue’s music school smartly dressed and proudly playing.  Brid herself leading a flock of youngsters ‘clothed-all -in-green-ho-ho’,   like a modern day Pied Piper.  There were set dances, a brush dance, two fabulous gymnasts and songs and recitations.  What more could you want?

The weather was kind as we basked in one of those rare sun-waves (four days in a row!), though chilly, at the end of it there was welcome warmth in Friel’s Pub where I joined in the session with the music of Aiden McMahon and Frances Cunningam playing to a packed throng.

The pub was already getting noisy and chaotic by the time I left after 7 so that was it for me.  Rather than join the festivities , which I have no doubt would stretch to the small hours I headed home, well satisfied, for an early night! 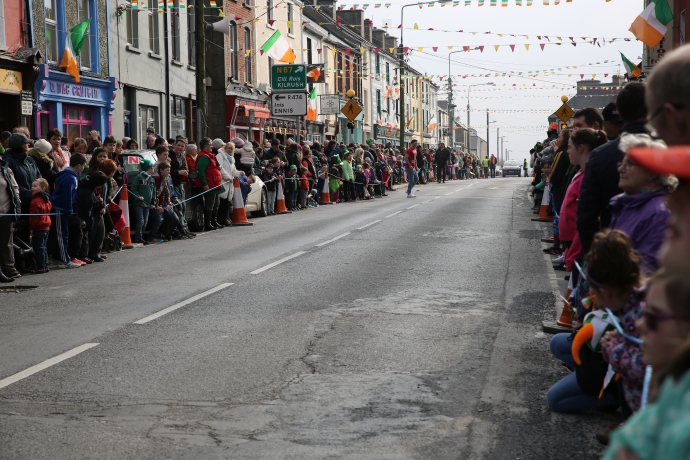 Miltown Malbay waits for the parade to start

Entertainment from the gig rig

A bridal party stops the parade.  A couple of those groomsmen are a little nervous.

It’s a long way from there (New York) to Clare

This has to be better than the parade in New York 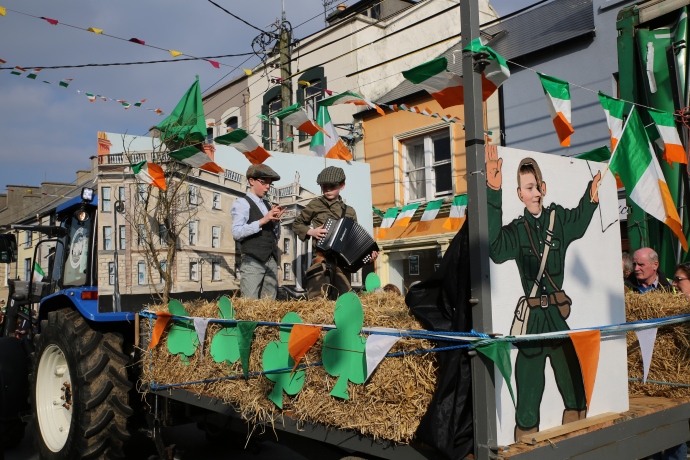 Rineen school brings the whole class, desks and all. 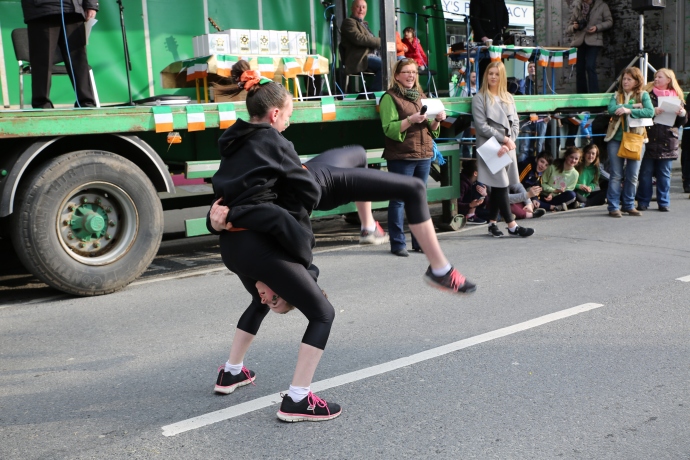 What would a St Patricks Day parade be without tractors? 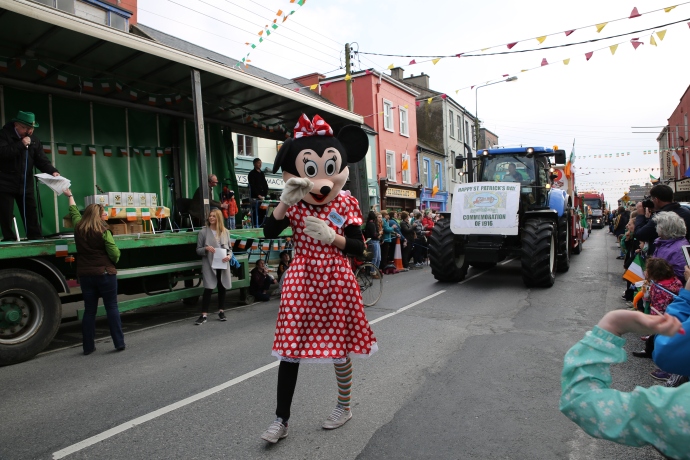 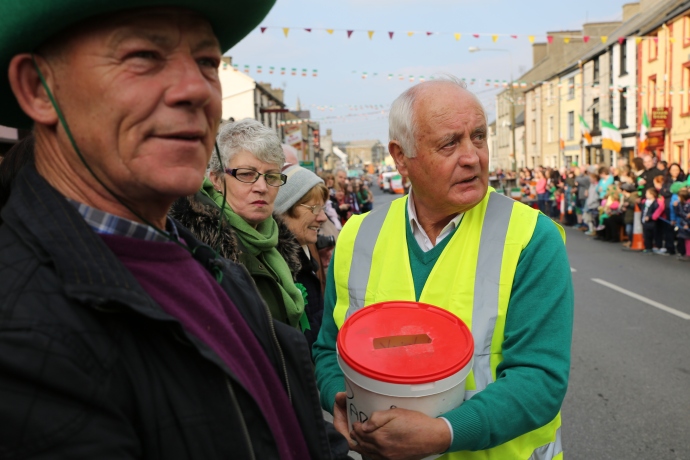 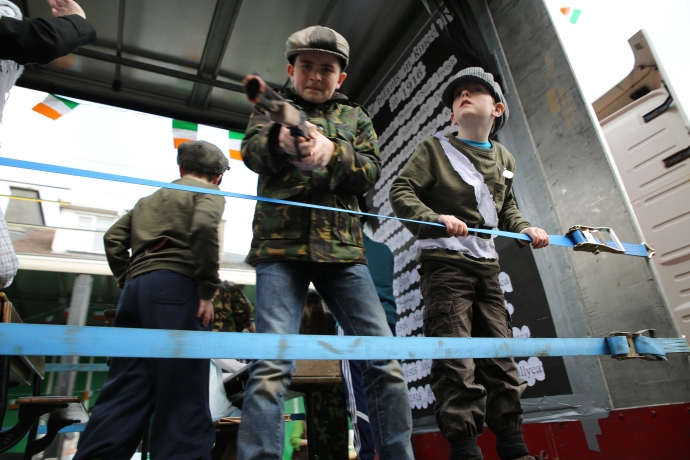 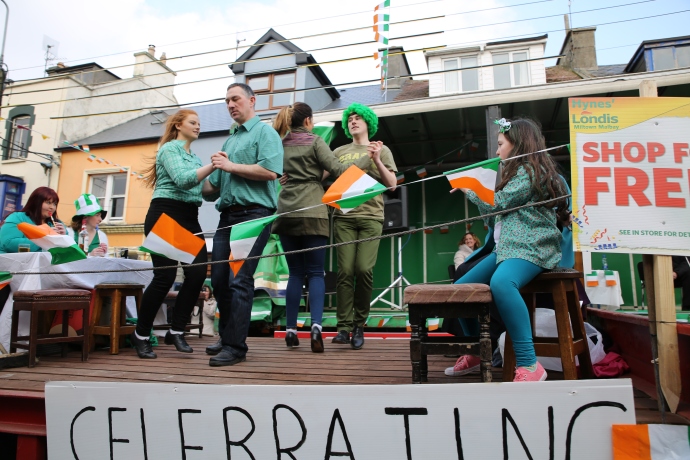 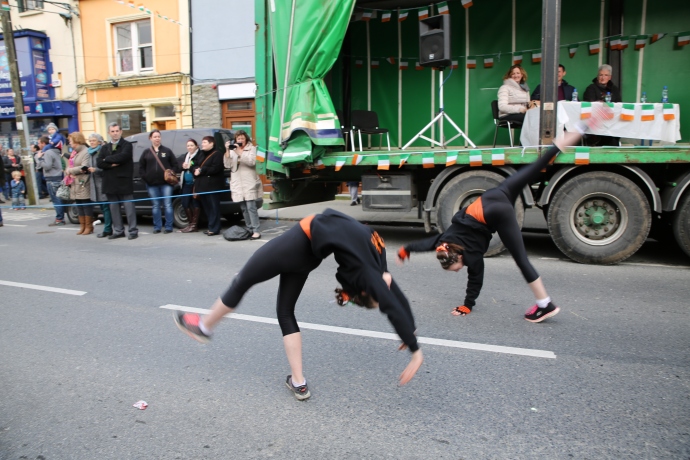 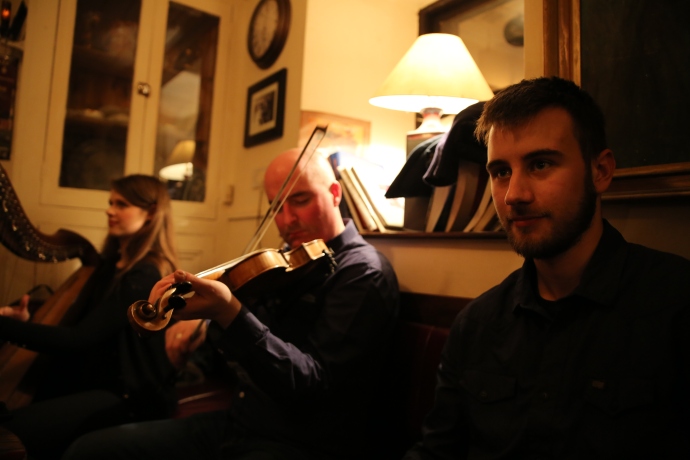