Another week another festival.  This time in my backyard at Doolin, pretty much the spiritual home of traditional music in Clare. This festival, held over the weekend 27th February to 2nd March 2015, honours the Russell family but in particular the much loved Micho Russell who died tragically in 1994. This is now its 14th year.

Doolin, for those who don’t know it has three pubs and a hotel and is spread out over a couple of kilometres just north of the famed Cliffs of Moher, Ireland’s biggest natural attraction. So it gets lots of foreign visitors. It has been something of a mecca for those seeking traditional music and for most of the year there is music every night in all the pubs. In itself this has brought about quite a change in Doolin as the pubs are very crowded and noisy and ironically it is not always the best place in Clare to hear traditional music. But there is no denying that the craic is mighty. This festival seems to mark the reawakening of Doolin from its winter slumber. Not that there wasn’t any music through the winter (take the Monday session at Hotel Doolin for instance) but this weekend brings out the punters in a big way and is a promise of what’s to come.

The festival kicked off on the Friday with the opening function in the hall. This was a showcase for the young talent of the district and the hall was packed with proud parents and relatives. And they had a lot to be proud of. From whistle-toting tots, who could hardly read and write, to All Ireland age champions on a variety of instruments. For over an hour there was a cavalcade of young musicians and dancers. I couldn’t help feel a sense of wonder at how important this music was to the soul of Ireland and how great it was that this was being passed to the kids. Yes kids learn musical instruments all over the world but nothing like here in Ireland. I have said it before but the future of Irish traditional music and dance seems safe. I was particularly taken with the set dancing where they were clearly enjoying themselves, even though they all had to rush to a disco afterwards. Good to keep a sense of perspective.

Then there was the main concert. This is traditionally held on the Saturday afternoon and was a cracker. I loved the format with all the musicians on stage, taking turns at solos and interspersed with performances from the whole band.   With musicians such as Oisín Mac Diarmada and Kieran Hanrahan and the amazign Seamus O’Donnell, the music was absolutely brilliant. We also had some brilliant sean nos dancing from Samantha Harvey and two show stopping performances from the 74 year old dancing singing fiddler Desssie O’Halloran, who had the enthusiastic crowd on their feet. For me the high point of the concert was the saxophone playing of Seamus O’Donnell including a soulful rendition of Danny Boy. Something I had never heard before. I was sceptical but wow!. What a lift it gave to the music. Not ‘traditional’ I know but played from the heart.

There was copious quantities of food and wine afterwards and then a singing session capping a great evening.

I love to attend workshops.  I had not heard of the tutor so it was to be a complete surprise. After two very late nights it was a wonder that I actually managed to turn up. And I am so glad I did. Unusually the fiddle workshop was scheduled for McGann’s pub, definitely a new one for me. I was the only one there. So I had a one on one with Catriana Ruine. I learnt five tunes but learned so much more than that, just playing and listening, It sounded so great just two fiddles in a quiet pub with the main distraction the crackling from the fire. I was very pleased with how quickly I picked up the tunes. When Catriana left I stayed in my corner near the fire and played tunes on my own for nearly an hour as the pub filled with diners, who happily, largely ignored me. It felt so good. Somehow I got inspiration from the moment. I don’t know where I got the confidence from but here I was, me playing on my own in one of the most famous music pubs in Ireland to a full house (even though they were more interested in their black pudding and crispy bacon than me) and playing competently enough not to be asked to shut it. All good things however come to an end and unceremoniously the piped music was turned on and I couldn’t compete. As I packed my fiddle away I was met with a lovely burst of applause from the diners which really surprised me as I didn’t think anyone was actually listening.

The workshop on the Sunday was equally good but for different reasons. There were two of us this time, and eventually our tutor turned up. We had the irrepressible and enthusiastic Cáit Ryan from Upperchurch in Tipperary. And while we only learned a couple of tunes, for one so young she was so full of good advice. In particular emphasising the importance of learning to sing in Irish.  I now have a new challenge! We even had a crack at the air Ned from the Hills.   This time the pub was not the best place as we were constantly interrupted, sitting as we were on the way to the toilets. Her family runs a music pub in Tipperary called Jim of the Mills, a place that is now firmly on my agenda to visit.

The sessions continued all afternoon and night over the weekend with musicians of quality. Highlights for me were a session that went at least 7 hours with the Clancy sisters and Mary Shannon at McGanns, some quiet tunes with Adam Shapiro and Terrry Bingham at O’Connors on Sunday and, at least for a while, some great music at McGanns with James Cullinan and others on Sunday. I say for a while because this session was brutally murdered by the arrival of two additional guitars (there was already one) competing with each other to see who could be the loudest and drowning completely the music. A shame. Fiddles were packed up and flutes disassembled and pretty soon the lads had McGann’s to themselves. The arrival of a cahone was the final plunge of the knife. This was more than made up for though on the Monday. James Cullinan again, his wife Carol, Noel O’Donoghue and Kevin Griffin kicked off in O’Connor’s at 3pm They were joined at various stages by others such as Donie Nolan, Seamus MacMahon, Carmel O’Dea, Anita Broderick and a couple of very talented kids, until it finally concluded at 12:30 am . A marathon 9 ½ hours of the most wonderful music that ebbed and flowed with the change in personnel. no guitars, no spoons and no bodhrans! Despite the pub noise that increased through the evening the music stayed pure and real. I changed my plans to go to Corofin that night and stayed to the very end. I had heard of James Cullinan’s quality and was not disappointed. And for a couple of hours I had the added privilege of meeting and playing with Carmel O’Dea. Another class fiddler. It was also special to hear a wonderful version of the Clogher Road from the fine voice of Donie Nolan. This is a session that will stay with me for years. Unfortunately I could not drag myself away so I missed what looked like another mighty session with Terry Bingham, Christy Barry and Anne Rynne in the other bar.

The craic was mighty, as they say, all weekend.  I met lots of new people and everyone was so friendly.  I have to share one story.  As I walked past the bar in McGann’s, with my fiddle on my back one young guy grabbed my arm and stopped me saying “you play the spoons”. A bit taken aback I pointed to my fiddle and said “no what makes you think that?” “You just look like it” came the response. I wasn’t sure what to say when he finally registered my accent.  “Fuck! you’re American” he blurts out.  After telling him he had now insulted me on two counts, we parted the best of friends. Just love it…..

A  fabulous festival and as I drove home that night through the light snowfalls I thought on this and the many other festivals I have attended. Every festival I go to gives me something. That’s why I keep going. Can’t wait for Corofin. 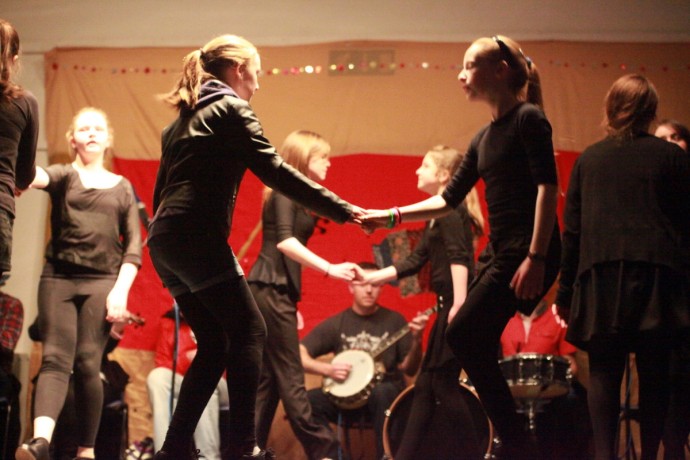 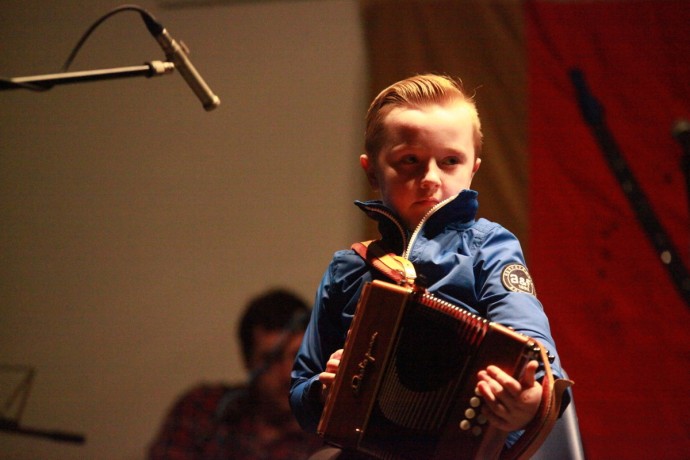 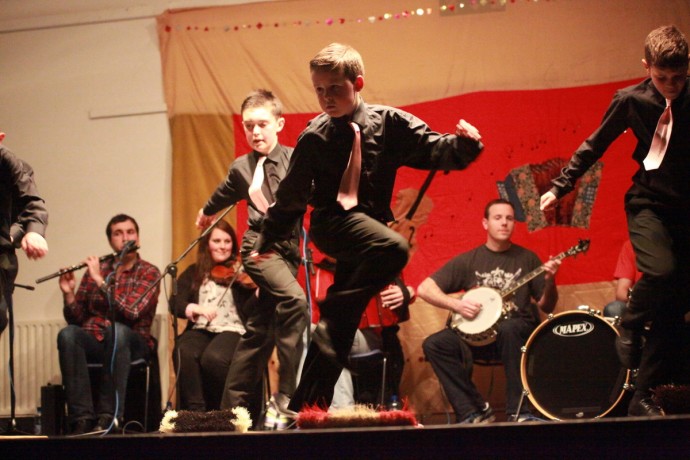 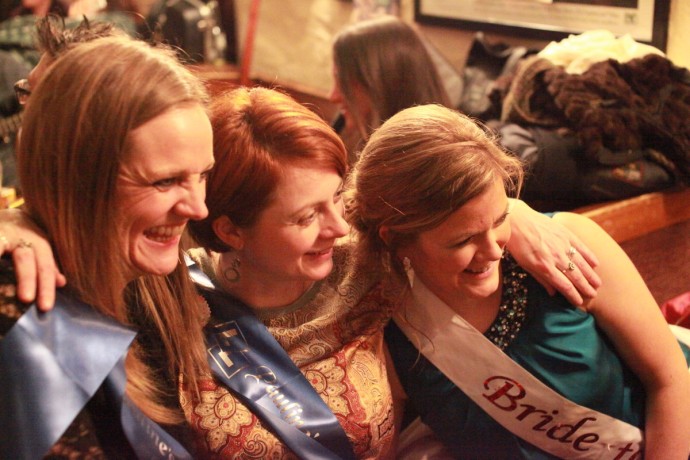 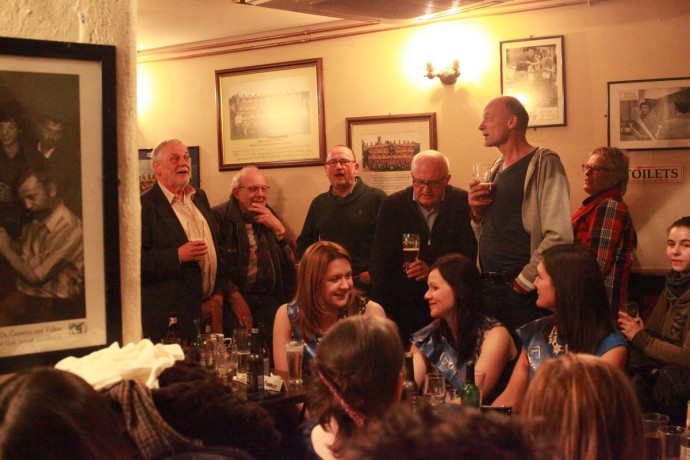 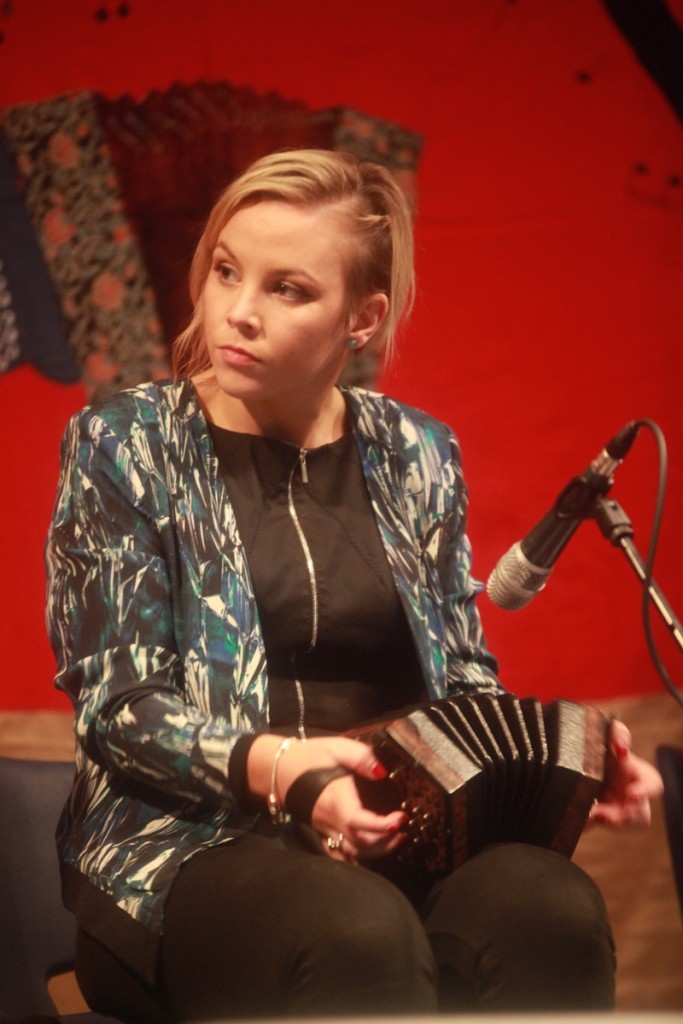 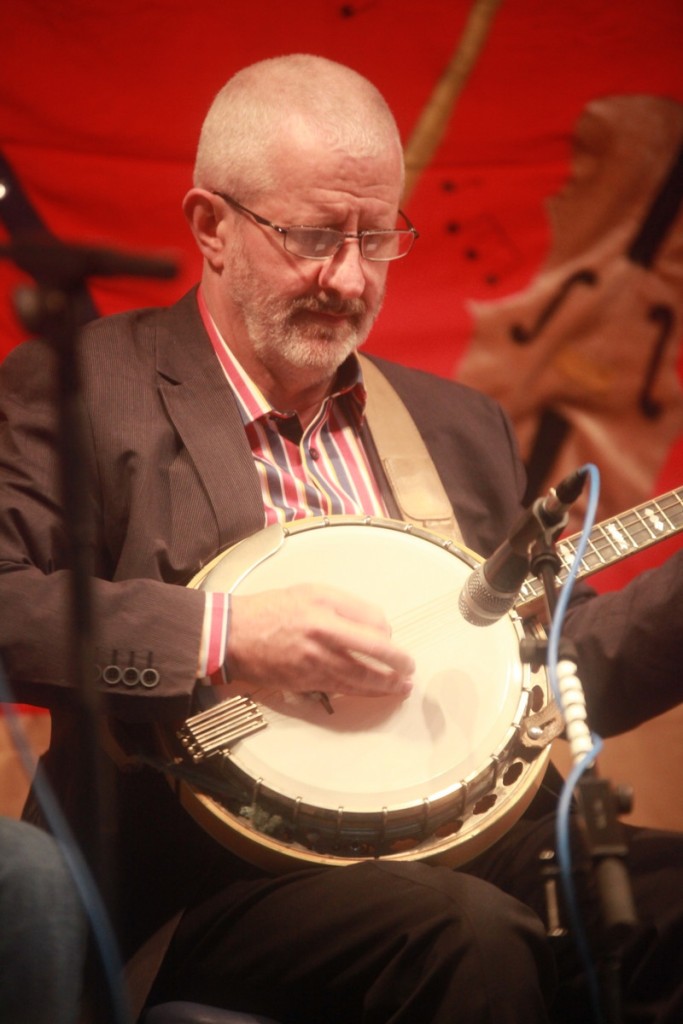 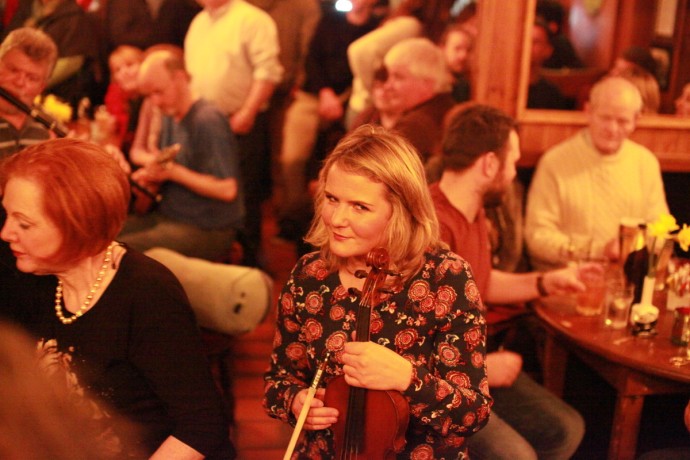 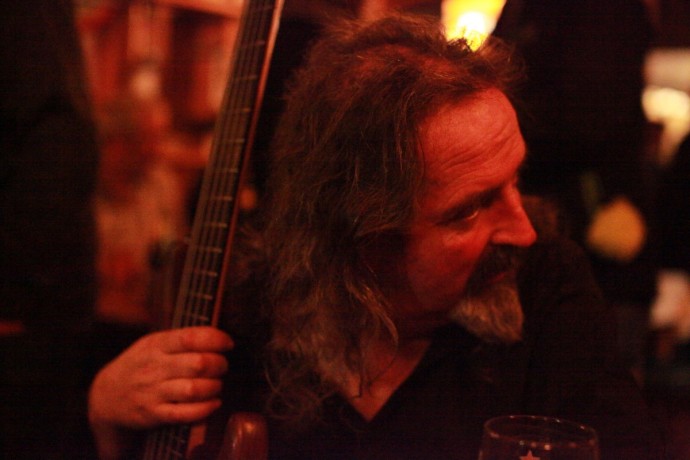 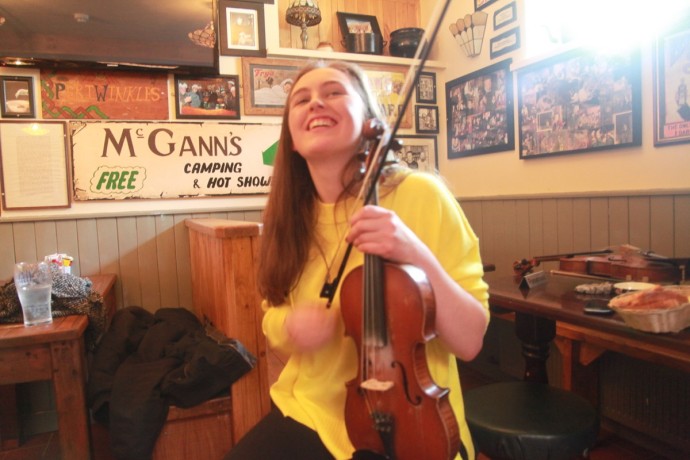 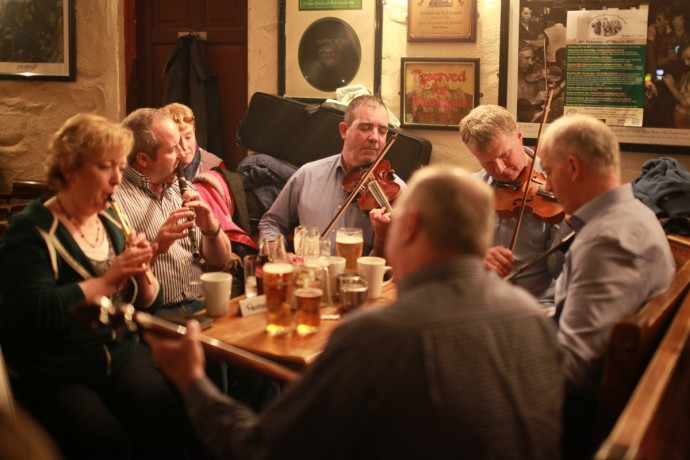 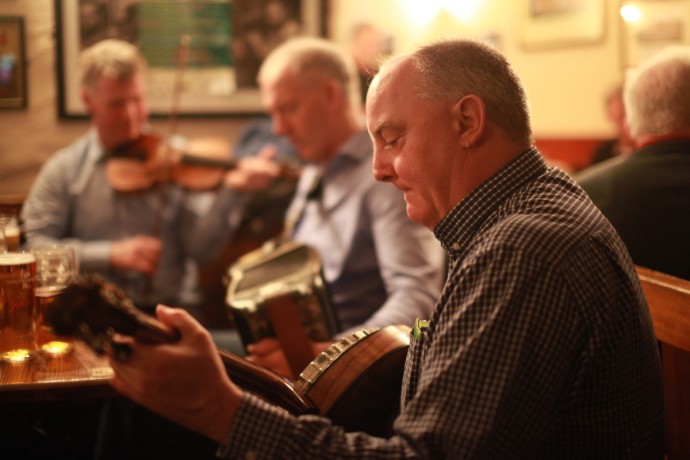 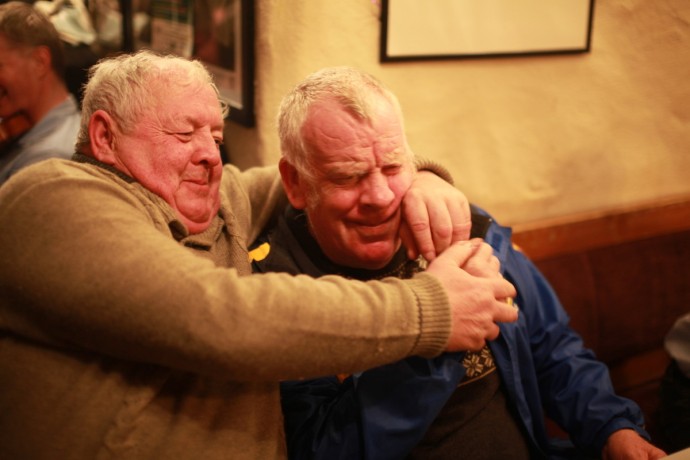 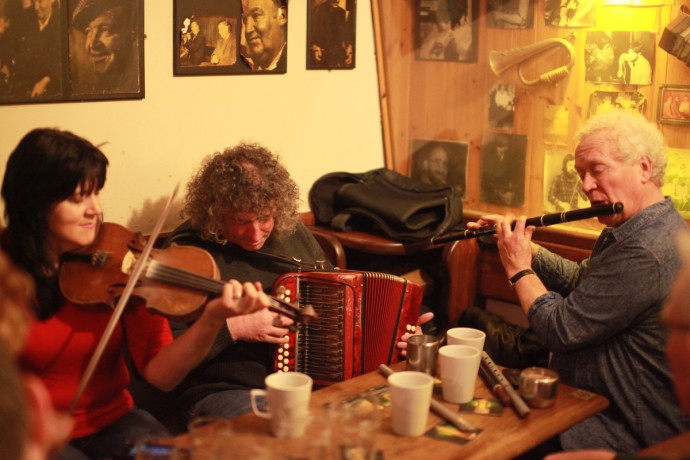