During my recent visit to the Armagh Piping Festival I went for a drive through the pretty countryside around Armagh.  As I noted elsewhere it is very “English” and very ordered, in contrast to the wildness of Clare, and the last vestiges of Autumn gave it a colourful tinge that would soon disappear.  About ten kilometres west of Armagh, I was privileged to encounter a game of road bowls (or ‘long bullets’ as it is also known in Armagh). This involves two players who project a steel ball about the size of an orange along a predefined course on public roads with the aim of reaching the finish line in the fewest throws. A brilliant concept when you think about it, except for the obvious hazards.  A crowd of participants (all men) follow the progress. Some of these men seem to have a specific role with one advising the thrower and another standing with his legs apart and arms up in the air to show the best throwing line. Others are charged with finding the ball when it leaves the road and disappears into the long grass with one carrying a 7 iron for this purpose. The end point of the throw (which is where the ball comes to rest, not as you would expect where it leaves the road) is marked with a pile of grass placed on the road and this becomes the next throwing point. There is much barracking and I was told there was significant betting though I saw no evidence of this. The throwing requires a degree of athleticism and great distances are achieved. An athleticism not however displayed in the assembled crowd, except maybe in dodging the speeding cannonball at the last minute – but nevertheless what a great excuse for a Sunday stroll.

All the participants seemed comfortable with the obvious dangers inherent in a crowd of twenty men standing in the middle of a narrow twisting and hilly Irish road. There seemed however to be a tacit understanding between drivers and pedestrians and this was entirely consistent with the great other Irish leisure activities that I have observed all over the country, such as stopping your car in the middle of the road for a conversation oblivious to the waiting traffic or standing in the doorway of a pub to have a cigarette ensuring no one can get in or out, or parking on double yellow lines (which seems to be ok if you put on your hazard lights). Don’t you love it?

One man stopped to tell me that I shouldn’t park where I had as the Guards will book me. I looked again and sure enough there was a tiny No Parking sign in the lane where I had stopped. I was thoroughly bemused that I might get booked for parking miles from anywhere while the law turned a blind eye to the obvious hazard of using a public roadway for a sporting event.

I felt lucky to have witnessed this. An event that I have only seen in documentaries and to have experienced this insight into an activity that dates back to a very different country in the 17th Century. Ireland continues to surprise and enthral me. 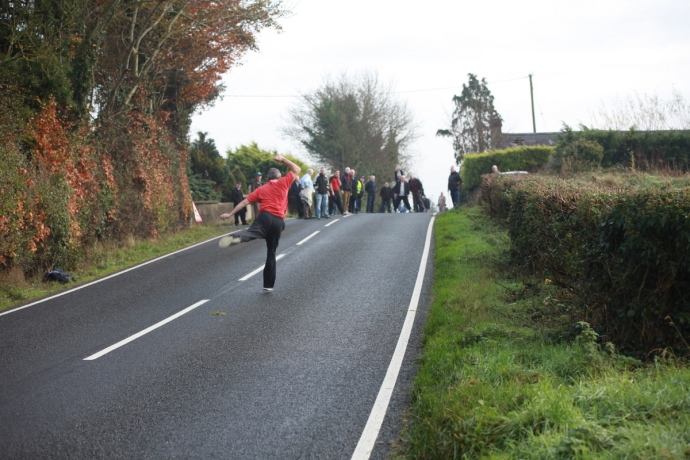 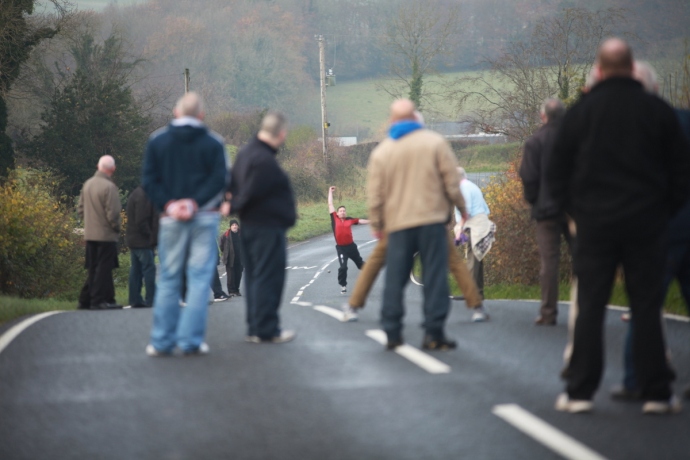 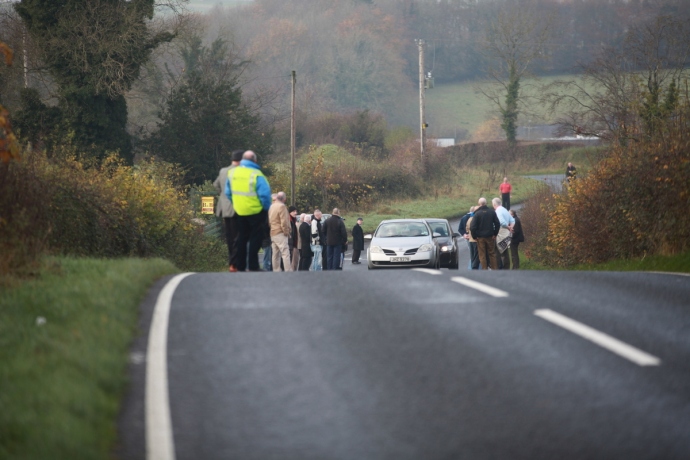 One thought on “Road Bowls Armagh”