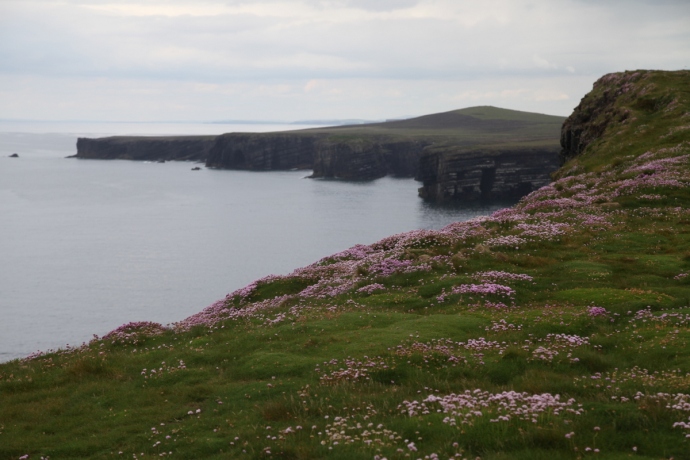 It was only by chance that I ended up here.  Loop Head is the most westerly point of Clare and is not far from the town of Kilrush.  I went to Kilrush one day last week (an hour away from Ennis) because the Internet said there was a session on Tuesday nights at Crotty’s. We always believe what we read on the Internet don’t we? Well when I enquired of the publican the response was “Oh that only happens in the Summer”.  Apparently June does not count as Summer.  “Anyway since you’ve come this far” he says “why don’t you go out to Loop Head”.  So I did.  There was light rain (what the locals here call mist) but not unpleasant.    There was a light house but they charged to see that so I just explored the cliff edges and was rewarded with breeding colonies of seabirds, dolphins playing in the water around the precipitous cliffs, carpets of fluffy pink flowers, squishy bog like mosses and only the odd German tourist.  Here are some photos I took.  They don’t really do the place justice.