Tiny Tawin Island and its Links to Two Giants of 1916

Ireland has lots of islands.  One compilation I found listed 255.  I’ve visited many and indeed written about them and absolutely love the different character of each, whether inhabited or not.  The other day I visited an island at the eastern end of Galway Bay, which I had never even heard of till then.  That’s Tawin Island just a few kilometres from Oranmore.

A typical view on Tarwin Island

The bridge to East Tawin

The road to Tawin Island

The road narrows to one lane and you do feel you are entering a forgotten world.  At the end of the road is a small settlement and then a cattle grid, beyond which the road disintegrates into a goat track, and just a short distance later disappears entirely under flooded fields.

The end of the road. 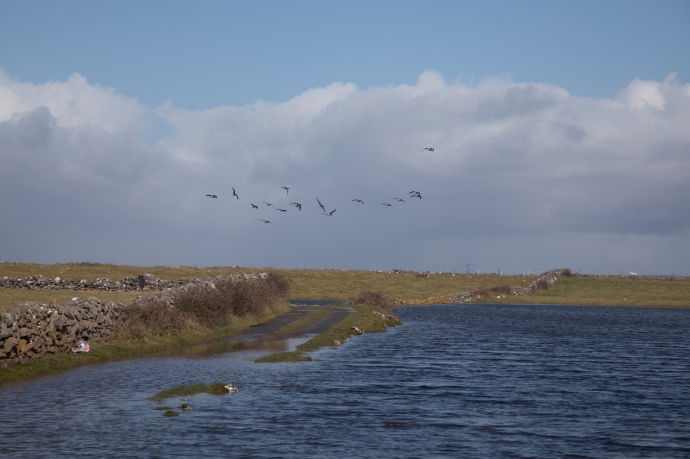 Flooded road.  The geese love it.

I parked up outside the National School.  It is a simple one room building with a red door and a leadlight window characteristic of the time.  There are two windows, one facing north and another to the west with great views over the bay and to Galway city but both placed high enough above the ground so that children at their desks could not be distracted.

This simple school building and Tawin Island however tell quite a story, linked to events in Ireland’s Republican history and to two giant men of the Struggle of 1916.  It is  worth retelling.

The tiny school was erected in 1905.  This is recorded in the plaque above the door. Before that there was another building which had operated as a school room.  But in 1903 that was closed by the authorities.  The local people had rebelled against the exclusive use of English, requesting that all lessons be in Irish.  In response the school was simply closed with the teacher withdrawn and the building quickly falling into disrepair.  The parents were then told it would not reopen until they paid for the repairs.

The following year the noted nationalist Sir Roger Casement, who was later to be hanged for his involvement in the Rising of 1916,  discovered their plight and became a fierce  advocate of the brave attempts of the islanders to ensure their 30 children did not lose their Irish.  The Tawin cause became central to Casement’s articulation of the formal espousal of Irish, the Gaelic movement and the cause of the Gaeltacht.  He obtained the support of the Gaelic League, which had been working feverishly to preserve the Irish languange and culture since 1895.  They helped raise the sum of £80 (of which Casement himself contributed £20) needed to build a new school.  This was opened in 1905, and the children now had a bilingual schoolmaster and again Irish was spoken in the homes of Tawin.

The building was also used by the Gaelic League for an annual Summer School, which leads to the next significant connection to the events of 1916,  Between 1911 and 1913 Robert de Valera became Driector of the the Summer School. De Valera of course was a commander during the Easter Rising and became head of the Irish government for over 20 years and also its President.  In 1912, during a visit by Casement to check progress of the school he had promoted, he met De Valera for the first time.  What transpired at the meeting is not recorded but it cannot be a coincidence that four years later they were both leading figures in the Rising.

The school remained open until 1992.  It is now incorporated into a residence and used as a holiday home but its integrity remains intact.

A short distance from the school is an ivy-covered ruin, which caught my attention.  I was told by the local landowner who happened to be wandering past, that this was known as the Teacher’s House.  It is in a sad state now but was clearly a fine home two- story home befitting a school mistress.  I met another local out walking and enjoying the intermittent sunshine. She told me she was a student in the school during the 1960s.  The teacher then was a Miss Fennessy and my informant told me what a memorable and  great privilege it was to be invited up to her house. Miss Fennessy never married and remained the teacher until the school closed in 1992.

The Teacher’s House on Tarwin Island 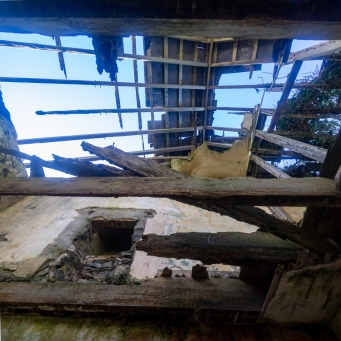 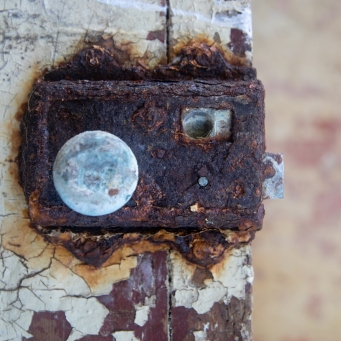 Not far from the school are perhaps a dozen houses line up along the road.  The ‘village’ has no facilities and indeed never did.  No post office but a green post box from George V remains built into a wall, with an Out of Service sign giving us a tangible link to the past.

The island, at first glance, doen’t appear to have that much to offer.  It is low lying and treeless, and after a couple of very high tides and weeks of rain was sodden, so not really suitable for exploring.  But its quiet remoteness gives it a  unique ambience. Watching the storms gather over the Burren hills and sweep across the bay and then the dazzling sparkle when the sun returned made for an ever changing light show that provided some great  challenges  and opportunities for the camera.

Darkness and light over Galway Bay.

I was surprised at how many people I met out and about (it was Sunday I suppose).  One local man I chatted to for quite a while (from an acceptable distance of course), pointed out a bob of seals on the rocks in the distance. I never would have noticed them and even with my big lens they were hard to spot. [By the way, there are 11 different collective nouns for seals, including bunch, crash, harem, knob, plump, pod and rookery but I’ve gone with ‘bob’ for some reason I can’t quite explain].

A bob of seals gather on the shore

The island is also home to large flocks (gaggles?) of Light Bellied Brent Geese.  These migratory birds winter almost exclusively in Ireland, heading off to Iceland in April and then spending the summer in Arctic Canada. They were hard to sneak up on. 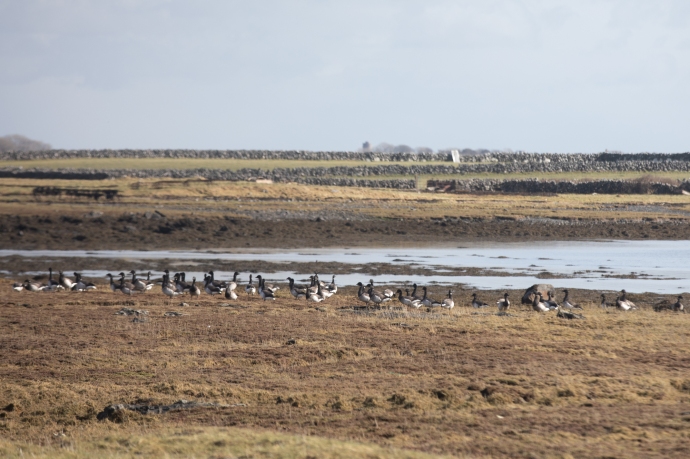 Anyway that’s Tawin.  I was surprised by what I found there and it proves to me yet again that anywhere in Ireland can provide rich rewards if you dig just a little and search out the back stories that are never that far away.

A safe refuge for hares.