The Sheela na Gigs of County Clare: An embarassment or a treasure?

I was shown my first Sheela-na-Gig way back when I first arrived in Ireland. I probably wouldn’t have noticed it if it wasn’t pointed out to me.  High above the entrance door on the ruins of the Kilnaboy Church in North Clare. It was difficult to make out and my guide was perhaps too embarrassed to explain it in detail. However this first exposure aroused  my interest (ha, no pun intended).

Indeed my introduction to the Sheela was perhaps symbolic of the historical ambivalence and difficulty their existence has caused in Irish culture. Embarrassment at talking about them and trying to explain them and tolerance and acceptance of them in very public locations and seemingly incongruous places such as churches and castles.

So what are they?  As in most of these things much is conjecture with theories of their origin falling into two camps.  Firstly it is thought they came from Europe in the 11th or 12th Centuries and were introduced into areas of Ireland conquered by the Normans.  In this case their location on churches and the grotesque features of the figures, even by medieval standards, suggests that they represented female lust as hideous and sinfully corrupting.

An alternative theory is that they may be of pagan origin and represent  Goddess-like figures that are in some way symbolic of fertility and fecundity. They seem to appear in 11th-12th century churches but are reused in structures built much later.  They may even date back further at least to the time of the Irish conversion to Christianity.

The name seems to be Irish (‘Sila’ means girl but can mean Hag or witch) and one translation is ‘Woman of the Breasts’. The name however is modern, probably dating from 1840.  No one is sure what they may have been called contemporaneously.    There is an interesting Australian connection here.  The slang term ‘Sheila’ is a generic term for a woman or girl.  “She was a bonzer Shiela!”.  It is thought to have come over with Irish convicts.

The Sheelas are usually very explicit female exhibitionist figures with legs wide apart and the vulva displayed, sometimes spread by the fingers.  There are similar goddess-like figures in other cultures but here they are unique and identifiably of Celtic/Irish origin.

Why they are placed above doors in churches or castles is not definitively known and it is possible that in medieval times their original significance was lost and they were used simply as a warning against evil and sin.

It is a miracle that some actually remain in situ. Most have been removed to a less public place, or hidden in a back garden, or disposed of or made their way to private collections or a museum. Many are missing.

So that is seven.  I decided to visit all seven.  This little adventure on its own told me a lot about Ireland and the Irish.  So here is the result of my endeavours.

I have already mentioned Kilnaboy.  Kilnaboy is one of the better known and most accessible in situ Sheelas in Ireland.  The parish lies in the heart of the Burren and is close to many well known megalithic monuments including Ireland’s best known portal tomb at Poulnabrone.  The church is highly significant and is said to date back to the 11th-century but was repaired in 1715. It has a number of interesting features including a large Cross of Lorraine in raised stonework on one gable and the ruins of a round tower in the grounds.  The Sheela is located over the arched entrance to the Church.  It is a little worn but complete and in remarkably good condition considering it may have been exposed to the elements for 900 years!  There is no fanfare, no sign and if you  didn’t know about it you could easily miss it.

Kilnaboy Church, Ruins of a round tower.

Rath lies between  Ennis and Corofin and is near Dysert O’Dea castle.  Here lie the ruins of a monastic site that dates back to the 6th Century. The current church buildings date from the 15th century but incorporate stonework from the 9th or 10th century. The Sheela na gig is located in a large fragment, originally used as a window sill, and possibly dating from the 12th century. The stone is inserted upside down in a wall of the church and shows a female figure outside the main intricately carved dsign. It is considerably worn but recognisable. 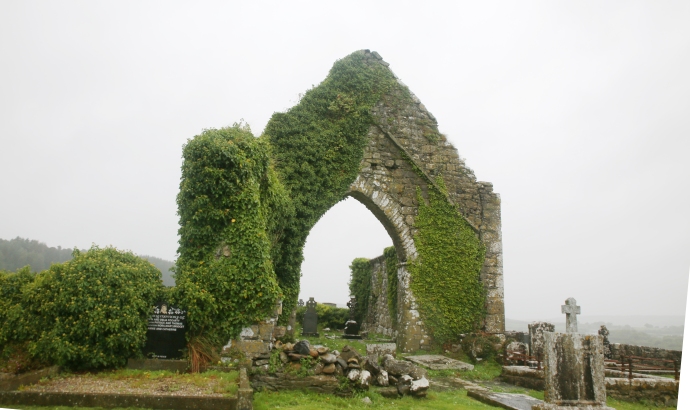 Carved stonework block in wall of church at Rath.  Block is upside down.  Sheela na gig is on the right side.

Detail of carved stonework.  Rotated back to upright.  Sheela na gig is on left 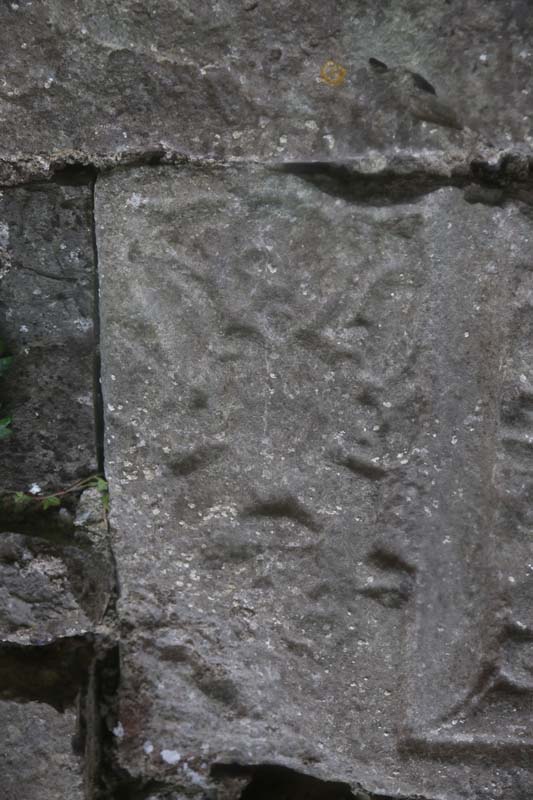 At Clenagh, close to the bank of the River Fergus near Newmarket-on-Fergus is the ruins of the Clenagh Castle. This is a large reasonably well preserved Tower House which was the home of the McMahon family. Date of construction is not clear but it was last occupied 200 years ago. The tower is now surrounded by farm buildings and locked gates and the yard is incongruously used for storage of bales of silage and farm machinery. Luckily on this wet and windy day the gate was unlocked and I could sneak in.

The Sheela wasn’t located where I thought it would be – near the well preserved entrance. It took quite a bit of searching.  I found it close to the ground carved into a quoin at the corner of the structure. There is no way of knowing the date but the style appears unique with spindly legs.  It is reasonably well preserved with a very clear outline but details are worn. There is evidence of rubbing. To me it looks like this is carved in situ into the stone which would make it much younger than the others. But hey I’m no expert.. Again no signage, and definitely no invitation to view. 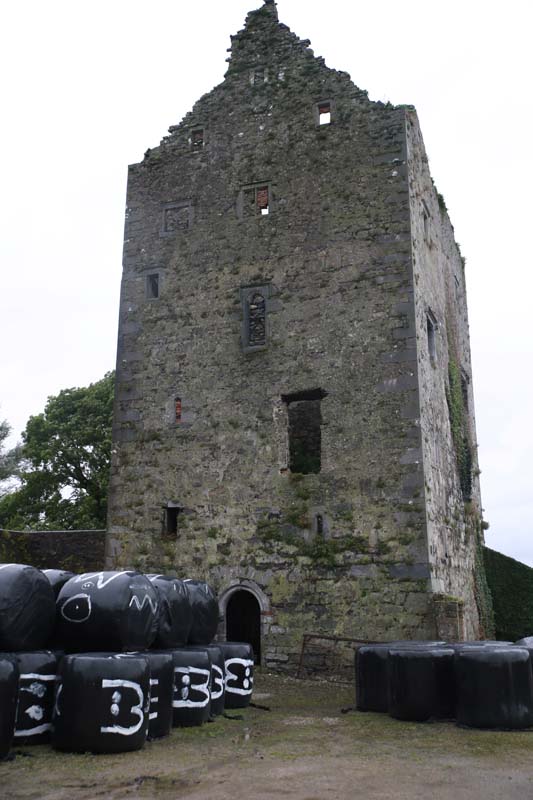 The castle at Clenagh.  The grounds are used to store silage and farm machinery and it is not open to the public.

Ballyportry is a Tower House from the 15th Century. It is near Corofin. Formerly the seat of the O’Briens. I visited it but as it is privately owned could not gain access. Of course I could have stayed there for 2-3,000 Euros for three nights. But no point really as the Sheela na gig from here is on public display in the Clare Museum. It was found in the castle grounds and removed in 1942. I checked it out. It is very well preserved and has many unusual features. An over large head, teeth being bared, big rounded ears and holding open what appears to be her anus. 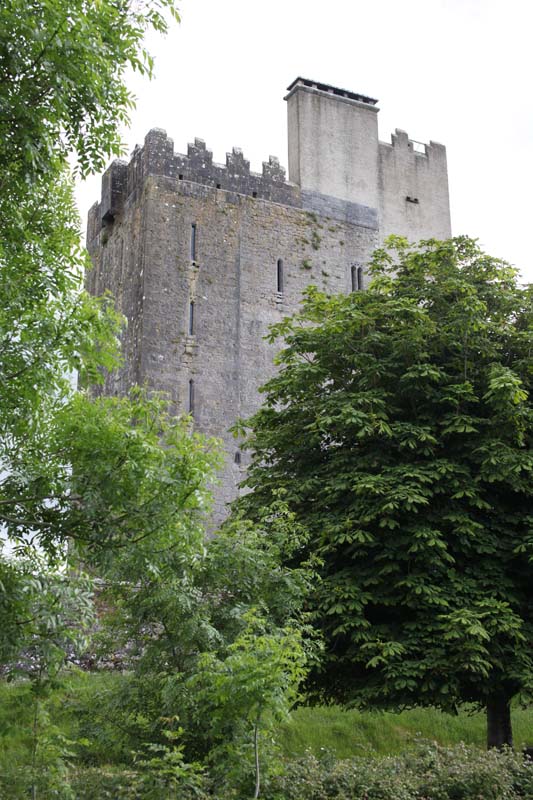 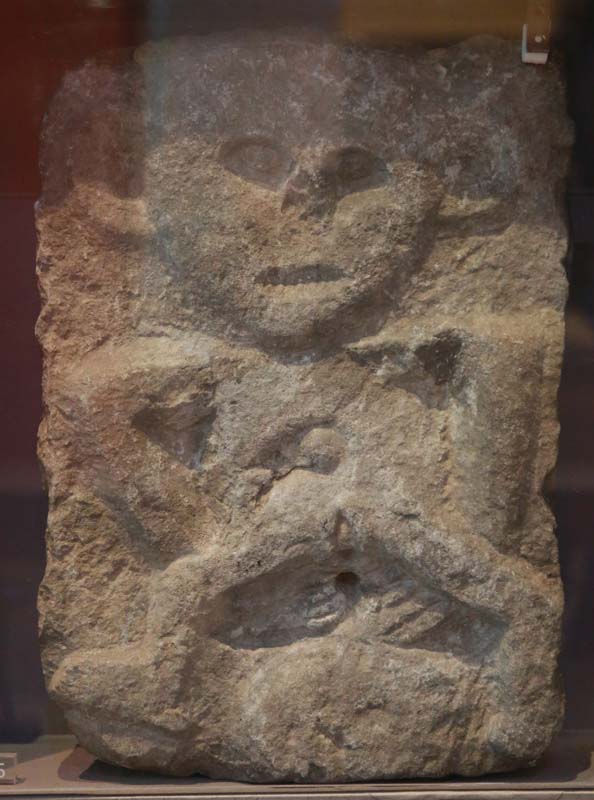 Killaloe sits right on the eastern edge of Clare and is separated from Ballina in Tipperary by the Shannon River.  It is the ancestral birthplace of Brian Boru.  And there is also St Flannan’s Cathedral. Across the road from the Cathedral is the AIB Bank. So what you ask. Well in the back garden of the bank is a Holy Well and next to this, leaning against a stone wall, is part of a Sheela which purportedly came from the Church.

To get access I spoke to Rebecca at the Customer Information desk and after much rooting around she found the key and I was given admittance. No special treatment, just another service offered by the bank. Seriously, I was amused that an historic treasure would be located in the grounds of a bank and that, amazingly, tourists find their way there and are given access. Ireland!

This figure is headless and considerably worn. but large and, depending how you catch the light, quite detailed.

The AIB bank in Killaloe viewed from the grounds of the church. 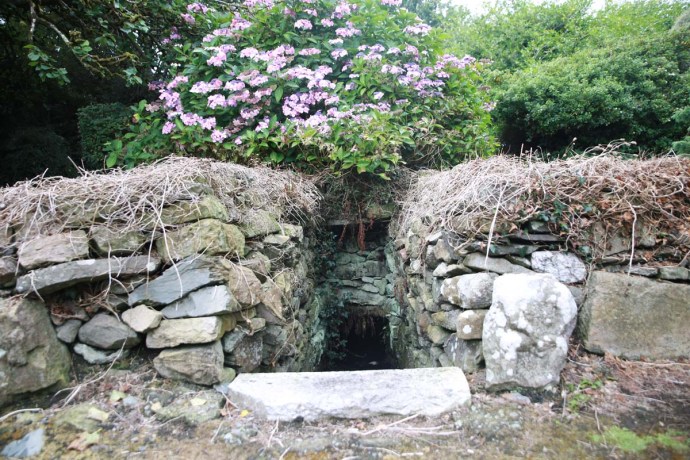 Holy well in the back garden of the AIB Bank, Killaloe.  Sheela na Gig fragment is on the right of the entrance. 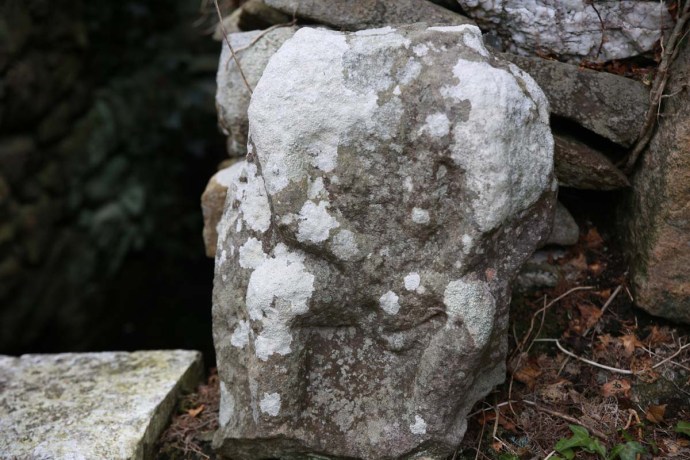 Bunratty is a very well known Castle and Folk Park and a major tourist attraction in Clare not far from Limerick. High up in a wall in the Great Hall of the Castle is a Sheela. It is in good condition but its location is such that it is hard to view. I am guessing it was moved from somewhere, perhaps an earlier castle structure and relocated during the construction of the current Castle to a place where it was not so conspicuous.

Interestingly the current castle is the fourth on this site and was built in 1425 by the MacNamara’s (again!)  but then greatly expanded by the O’Neills (again!) around 1500. The earliest castle is believed to date to 1251, though the site had been settled since 977. Exactly where the Sheela na Gig fits in is unknown. It is somewhat insensitively painted black and stands out starkly from the lime washed wall so the tourists can see it.  It seems to be in good condition.  This was the most unsatisfying Sheela I saw.  I hated that you had to put a telephoto lens on to see it.  And for feck’s sake – painted black! 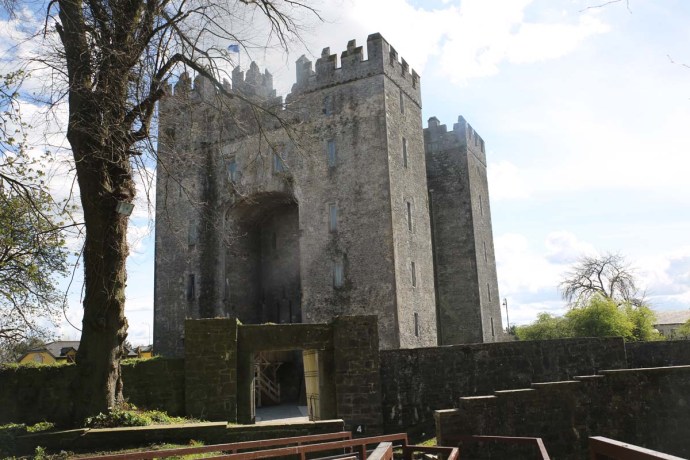 Lastly, there is a doubtful Sheela inserted as a panel into a bridge at Clonlara.  The panel is inscribed ‘1769’ which relates to the date of construction of the bridge.  The Sheela comes from an unknown site and is quite defaced.  Only the head and arms are distinct. 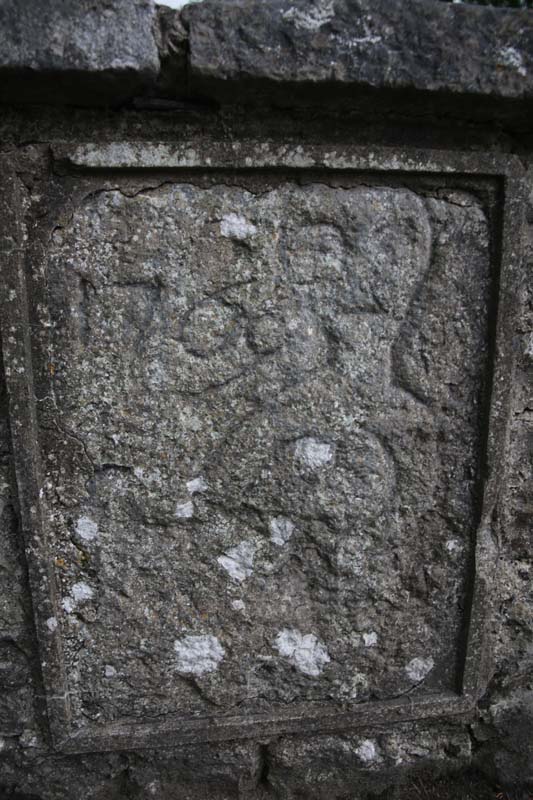 A final thought.  I find it fascinating that the Church has placed these extremely confronting figures at their portals for centuries and yet preach a moral purity. It seems a trifle dissembling. But I suppose we should be grateful that this unusual window into medieval and pre-medieval thinking and practice in Ireland has been preserved at least in a fragmentary way.

Anyway Ireland is full of mysteries and Sheela-na-Gigs are another one. I suggest if you come to Ireland you make a point of chasing down your nearest Hag in the Wall.  There’s sure to be one near you.  There are 140 of them.  The search will be as much of an adventure as the discovery.

6 thoughts on “The Sheela na Gigs of County Clare: An embarassment or a treasure?”