I was part of an extraordinary event last night.

I had never heard of Marty Morrissey but around these parts he seems to be a god. I’m talking here about the Parish of Kilmurry-Ibrickane in West Clare. A mouthful but it is my adopted home community. It comprises the villages of Quilty, Mullagh and Coore. Kilmurry-Ibrickane is a famous name in the world of GAA (that’s Gaelic Football for my Aussie followers) and Marty is its leading advocate. He is a well-known sports commentator for RTE and a passionate advocate of the local community. To this end he organised this concert as a fund raiser. Through his many contacts he gathered together a who’s-who of Irish music with a strong focus on local talent. And there is plenty of that.

When I first heard of the concert I tried to get a ticket but it sold out in four days. One of the organisers, Michael Talty offered me a spare ticket which I gleefully accepted. It wasn’t cheap but I was intrigued by the concept.

It was a wet and dismal night, though not cold there was a gusty wind blowing off the Atlantic. But then again that describes most nights these days in this part of West Clare. I arrived into Mullagh to an army of men in hi-vis yellow and waving red or green wands directing me to the GAA oval where I was told to park and a mini bus ferried me the short distance to the church. I was impressed by the organisation. The St James Church Mullagh was hardly recognisable with a giant marquee erected in front of it. It was 6.00 pm and the tent seemed nearly full already. The concert didn’t start til 7.30 but here was no shortage of hot mulled wine and mince tarts which I eagerly accepted when proffered. There were a few people I recognised from my interactions with the community. And a few who seemed to know me, though I was struggling to recognise them. I was asked by one lady if I was the Parish Priest of Ennis and another who asked me if I was still coming to Christmas Dinner. Do I have some doppelgängers out there?

I was shown to my pew which was already fully occupied but they squeezed up and let me in. The seat was in the far corner about as far from the stage as possible but it had the advantage of being close to the door so I could sneak out if need be. I know that seems unkind, but I was not sure I was going to enjoy this night.

The concert started pretty much on time at 7.30 which was a surprise for Ireland but as it was being streamed live this was understandable. This in itself was pretty impressive, with the concert being seen around the world. I have to say we were then treated to a marvellous and continuous panoply of artists for the next 5½ hours. That’s right! five-and-a-half-hours! Remarkably there were no flat spots and myself and the audience were held in thrall for all that time with the possible exception of the raffle draw. Although with the prize of two return tickets to Australia even that was attention grabbing.

From the opening act which was the Scoil Mhuire Choir, who made a spectacular entrance to the stage holding candles and walking on from three directions before delivering a sparkling and spellbinding performance. And it was only uphill from there. Following a rock star welcome for Marty we had the Kilfenora Ceili Band sounding splendid and looking equally so in their red and black outfits. They were joined by a team of set dancers from the Eugene Donnelan School which lifted the whole performance.

Not all the music was to my personal taste. There was crooning country singer Mike Denver with a medley of Christmas songs, P J Murrihy and his band, local singer from Cree, Karen McInerny, Tommy Flemming, for whom the audience went wild and the penultimate act of the night Phil Coulter who delivered as expected with lovely renditions of his songs Steal Away and Town I Loved So Well.

The highlights of course, for me though, were the trad acts, most of which were local musicians. Musicians from the Brid O’Donoghue Music School from Miltown Malbay gave a beautifully textured performance of slow tunes, jigs and reels ending with two young boys doing sean nos dancing on half barrels. There was exquisite accordion playing from Michael Sexton and he was joined by talented young sean nos dancer Eoin Killen in a superb display of relaxed and confident dancing. A future star. The Donnellan Family from Ballina, Co Mayo were terrific with their energetic playing and again one of their members Carol, did a sensational sean nos brush dance. There was a scratch band of local musicians led by Michael Falsy who had the audience stomping with a rousing rendition of Lark in the Morning, and an absolute standout for me, a gorgeous rendition by Martin and Ronan Burke of the song the Clogher Road. Special, because I live on this road! And I shouldn’t forget the local Kilmurry-Ibrickane Community Choir which included kids to grandparents and did a highly creditable job.

The grand finale which took us past 1 am was provided by the Galway Tenors who started off rather shakily with a crowd pleasing version of Fields of Athenry, an aria accompanied by waving scarves in red and green (provided to the audience in their programmes) and finished with some rousing Christmas carols.

In between the acts were slide shows, videos, old films, documentaries, all speaking of the great community spirit in this Parish and I have to say this spirit shone through all night. The audience of locals lapped it up, picking up on the many in-jokes. The story of the “spirit of Quilty” with the rescue of the sailors from the Leon, the successes of the Kilmurry-Ibrickane GAA team, a film of set dancing in the Quilty pub from 1970s, video greetings, from Australia, NZ and the USA, from the Mullagh and Quilty diaspora, photo albums of parishioners much of it received with enthusiastic clapping or laughter. And a spoof RTE News flash reporting on the traffic jams crippling West Clare as cars head to Mullagh. All great craic.

I have one gripe. Most of the “name” artists used backing tracks. The exceptions to this of course were the trad acts and Phil Coulter who accompanied himself on the piano. For me this is very sad that high-profile acts to do this. When you pay 40 euros for a ticket you expect to see live music. Singing to a backing track for me is no better than karaoke and gives the voice a detached feel and is rarely satisfying. It certainly lacks spontaneity. It may be alright for the X-Factor but not for a live concert. Anyway that’s pretty much my only beef and the rest of the audience didn’t seem to share it clapping excitedly for every number.

Fair play to the organisers they did an absolutely fabulous job.

Merry Christmas to all my followers and please stay tuned for more adventures in 2015. 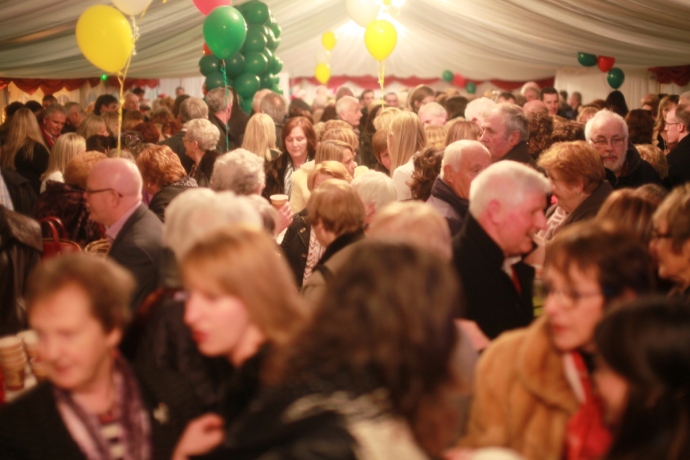 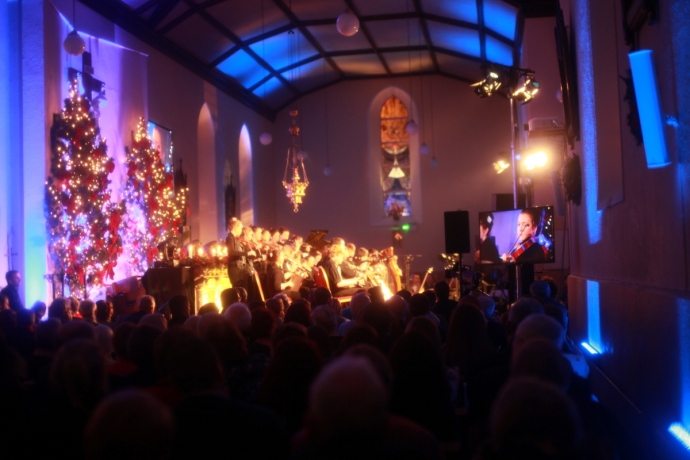 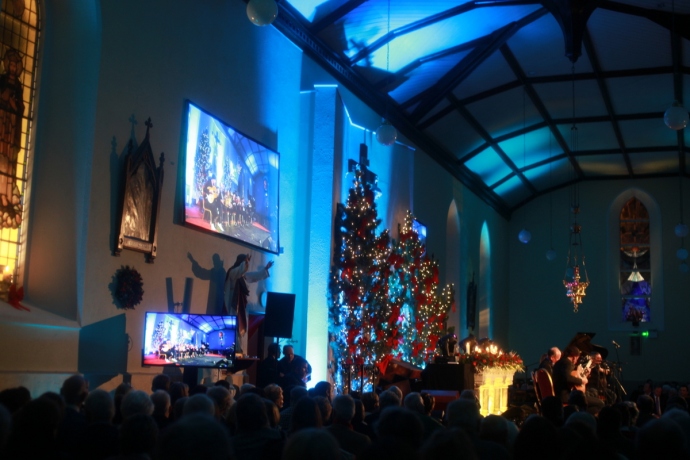 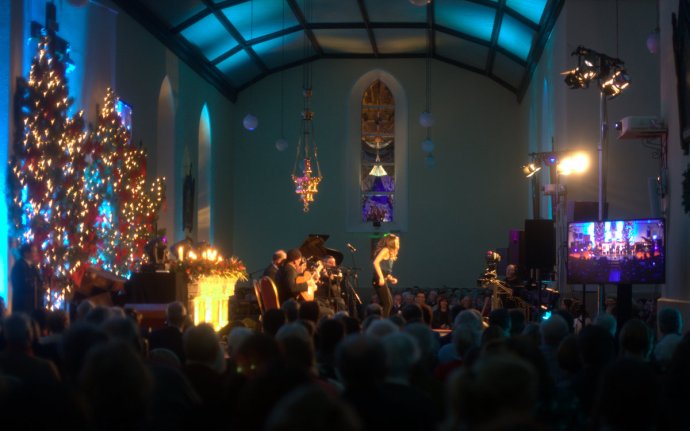 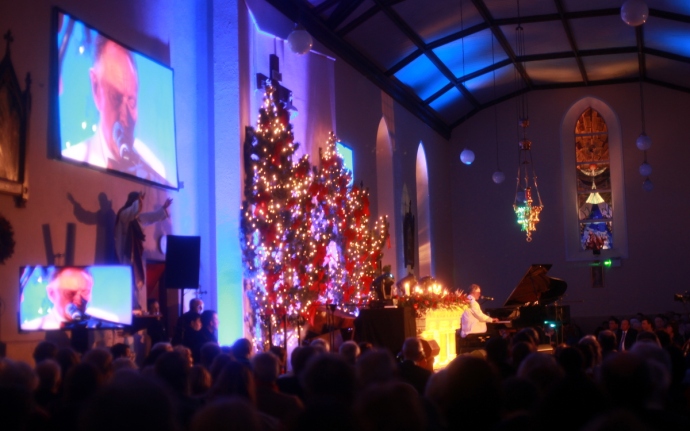 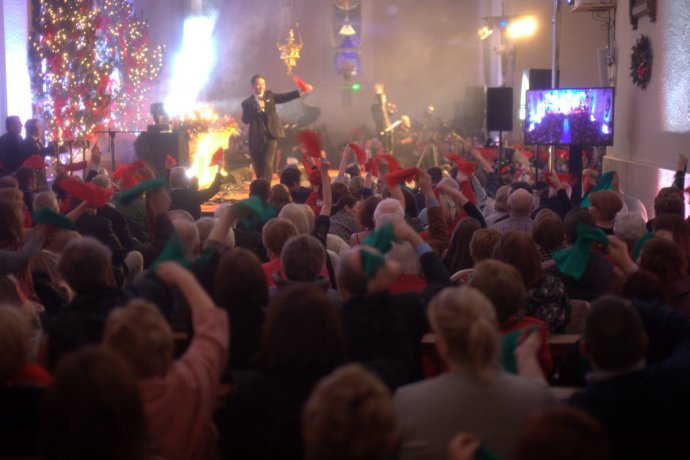 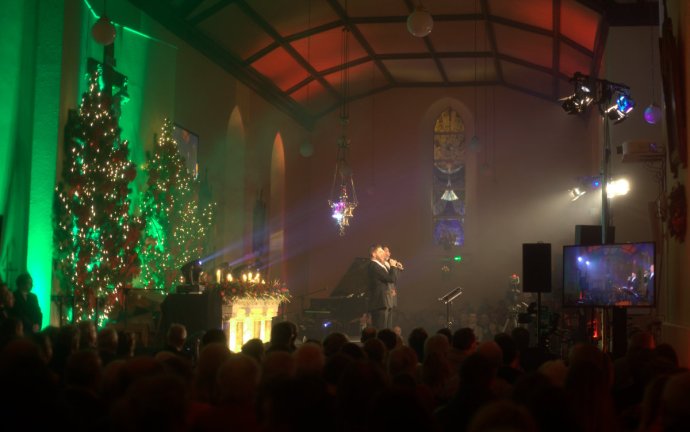