Well I am here. Can’t believe it. The less said about the trip the better. No complaints about Emirates but I can’t sit still in an airline seat for 20 hours let alone sleep. Playing Space invaders (the version where you fight for elbow space on the armrest!) with the 20 stone Russian in the adjacent seat is not conducive to sleep. Still I did catch up all eight episodes of the first series of Breaking Bad!

Everything had gone so smoothly there had to be something lurking around the corner. It arrived in the shape of the Immigration man from Hell! With a small grab bag of mainly assorted Aussies and Kiwis we watched all manner of people ushered through the Euro line, without a glance at their passport while we queued for over half an hour. I had no forewarning of the treatment I was to get. My big mistake was booking a return ticket five months out. He did not accept my explanation that I was away for five months but wasn’t going to spend all that time in Ireland. He was not impressed with the suggestion that I was going out of Ireland and then returning, saying I had to go back to Australia before I could start another three months! And for half an hour I was interrogated as to where I was staying (prove it!); why was I here; how much money I had; and how it was all my fault anyway that I was in this situation. I actually thought at one point he wasn’t going to let me in but In the end he gave me three months telling me I had to change my return ticket. This guy would have found a reason to turn St Peter away from the pearly gates. It certainly wasn’t the warm embrace and welcome that I had naïvely expected. But that wasn’t the end of it. An hour to sort out a hire car! Anyway I was finally on the M1 heading into town to pick up Marion and Dermot who were waiting for me at Jury’s Inn in the city.

It was a squeeze – three bodies and a half a dozen suitcases in a Nissan Micra but we were soon on the Motorway out of town and with green fields rolling by we were in Tullamore by mid afternoon.

[Enda had kindly let us use his house as a base and very comfortable it is too but our stay there turned out to be very short (more on that another time) and we made plans to go our separate ways from Sunday staying only three nights.]

A quick search of the internet revealed a session at the Eugene’s bar in Kelly’s hotel in town. The article was 10 years old so it was a risk.  I couldn’t  raise them by phone to confirm but it was worth a punt if not a pint….

Rolling up at 9.30 to an empty lounge there was of course no sign of any session. It looked promising however with the walls covered in musical instruments and memorabilia. It was the most Irish of Irish pubs.

Aoife) was also pretty damn good! (a later search of the internet showed her to be an All Ireland champion. http://comhaltas.ie/music/detail/comhaltaslive_286_4_aoife_green/

As the only fiddle there I joined in where I could and I even started a set! They were surprisingly generous in their acknowledgement but nevertheless I felt as if I had gate crashed a party at the big end of town. I sang a couple of songs and despite managing to start in the wrong key carried it off without disgracing myself.

It was a very friendly pub. Marion and Dermot engaged in deep conversation with all and sundry and many people came over for a chat and to find out who we were. By the end of the night we were all best friends! At 1230 it was over and with only two hours sleep since I had left Australia I suddenly hit the wall.

The next day kicked off with porridge and a big fry up – bacon, eggs, black pudding, white pudding mushrooms, sausages – really getting into the swing of things now. Faced with the daunting challenge of filling in time till the next session I succumbed to the regulation visit to the Tullamore Dew “Heritage Centre” which turned out to be a shop selling bottles of whisky (at higher prices than Dunne’s) and souvenirs in a warehouse nestled on the banks of the Grand Canal.  Pretty enough but hardly a ‘Heritage Centre’

Then drove out to Clonmacnoise on hedge-lined back roads through rolling green hills. The ‘real’ Ireland? Clonmacnoise is an old monastery apparently founded in 546AD becoming a major centre by the 9th century when it was associated with the Kings of Connacht and later with the kings of Meath and of Tara.

It’s an amazing place with an amazing history. Attacked by the Irish, the Vikings and the Normans on a multitude of occasions surviving and thriving to the 12th Century from when it started to decline. Of course I took lots of photos and I’ll post some when they are sorted.

Meanwhile I had discovered a session was on that night at Grogan’s pub in Glasson just outside Athlone.

Grogan Pub in Glasson, near Athlone

We arrived just before the scheduled starting time to an overflowing front bar packed with golfers celebrating some tournament that day. Fighting our way through to a separate bar off the side we saw an empty table with the giveaway of a piano accordion and a whistle on the seat. We took our seats and introductions all round. This time I remembered some of the names with Ellen on the accordion and Roy on a Djembe drum and Cormack on the whistle and flute. There was a guitar and a banjo and that was it. The pub was really noisy and unlike the previous night the musicians were pretty much ignored and left to get on with it. A lot of familiar tunes played at a lovely pace.

So I found myself playing well over 50% of the time. I was soon kicking tunes off and quite a number of the Perth tunes seemed to be new to them so I found myself playing alone. I couldn’t believe it – here I was in a pub in a little village in the middle of Ireland playing a tune with top musicians and them listening to me! The hard work of the last few months is starting to pay off as I was playing with confidence and while I made heaps of mistakes it didn’t seem to matter.

Paying a tune with Cormack 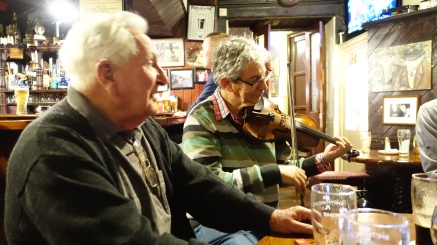 It was all tunes with only a break for a rendition of the Rare Auld Times by Dermott which was well received. It struck me that we hadn’t seen a fiddle in either session. According to Ellen “fiddles aren’t very popular in the Midlands@ It seems to be mainly flute, banjo and accordion. And no bodhrans either. The tunes went on without a break until well after 1:30 by which time the musicians were the only ones left – everyone else having staggered off into the now chilly night air.

The word is that there is a session on Saturday in Athlone at Sean’s Bar. Apparently the oldest pub in Ireland – even Europe. Possibly the World!  Been there since 900AD.