Posts Tagged With: Ring of Kerry

As I say you gotta love puffins.

Well they are cute and because they breed on offshore islands the difficulty of getting to see them adds to the mystique.   They are truly an aquatic beast, rarely seen on land spending most of their time in the water far out to sea when no breeding.  Ireland though is a great place to get close and personal.

You would think it would be easy.  After all the global population is over 10,000,000 which sounds healthy but in many places it is declining and considered vulnerable. But here are only a few places they can be seen.

I saw them during my visit to Skellig Michael in June (click here). While they breed at the Cliffs of Moher near my home base in Clare, it is hard to get a good viewing point so after four years I still hadn’t seen any.  Skellig Michael though is a different matter. You can’t avoid them at this time of the year.

A small black and white bird, about 30 cm in length, a member of the Auk family which includes guillemots, razorbills and auks themselves. But the puffin fascinates because evolution has dealt it so many attractive features. A very distinctive beak which from the side is broad and triangular and becomes brightly patterned in orange and yellow during the breeding season, orange webbed feet and eye ornaments to match. Their upright stance and waddling gait is endearing. 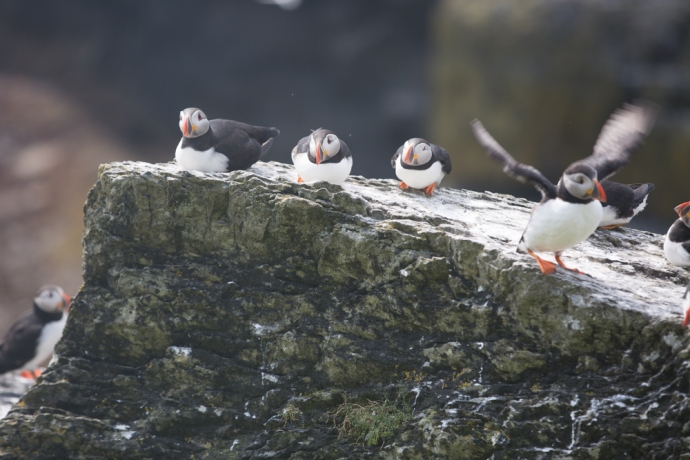 Their short wings seem to be more designed for moving in water than air and watching them in flight is hilarious. A running take off, madly flapping and you are sure they will crash into the cliff but a quick change of direction at the last minute saves them.  Landing is just as problematic and a crash landing is the rule. 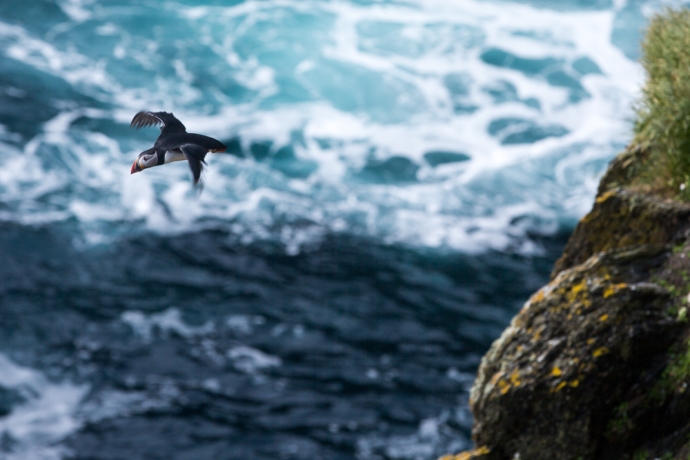 During the breeding season they live in burrows or in crevices and caves in the rocks and patrol during the day interacting with neighbours.  I could have watched them for hours.  Once the chicks (pufflings they are called) are hatched they head to the sea and don’t return to land for several years. They start breeding at about 5 years of age and then live til about 30.

Standing guard in front of a burrow

Or nesting in a cave

I could ramble on about them for ever but there are plenty of sites that can tell you everything if you are interested in learning more so I would direct you there.

For the moment I will just let my pictures do the talking and use them to express my gratitude at having such a close encounter.