The Raptors at Dromoland, Co Clare.

Dromoland is one of the great castles of Ireland.  Located near Newmarket-on-Fergus in Co Clare, it was for over a thousand years the seat of the O’Brien family. It is now a luxurious hotel with world-class facilities.

Dromoland Castle, built in the early 19th Century and now a luxury hotel.

It has an amazing history that mirrors that of Ireland.  I could talk here about Donough O’Brien, the first inhabitant of the site in 1014, a son of Brian Boru; or of Murrough O’Brien who gave up his title to Henry VII in 1543 to become the first Baron of Inchiquin; or of Marie Rua, the widow of Conor O’Brien who in 1651 married an officer in the Cromwellian army to keep the castle in O’Brien hands; or of Sir Donough O’Brien, the richest man in Ireland in the 17th century; or of Sir Edward O’Brien who gambled the estate on a racehorse in 1730; or of the construction of the present castle in 1800; or of William Smith O’Brien who fought for the rights of Irish peasant farmers in the famine rebellion of 1848; or of the decline of the Barons of Inchiquin in the early 20th century; or of the saving of the castle from destruction by the IRA in 1921; or of the sale of the castle in 1962 or…

I want to talk about my walk with the hawks and my visit to the School of Falconry at Dromoland.

My guide on this visit was Damian, flute player, fisherman and, as I found out, expert on all things raptor.  He is one of four falconers at the School.  He introduced me to his charges which included Peregrine falcons, Peregrine-Saker hybrid falcons, Harris hawks and two species of owls, the Irish Barn owl and the Bengal Eagle owl. 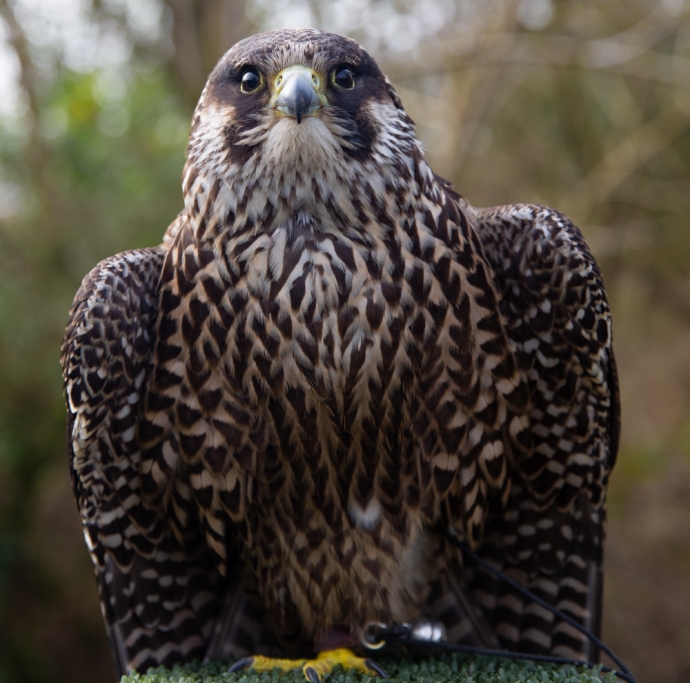 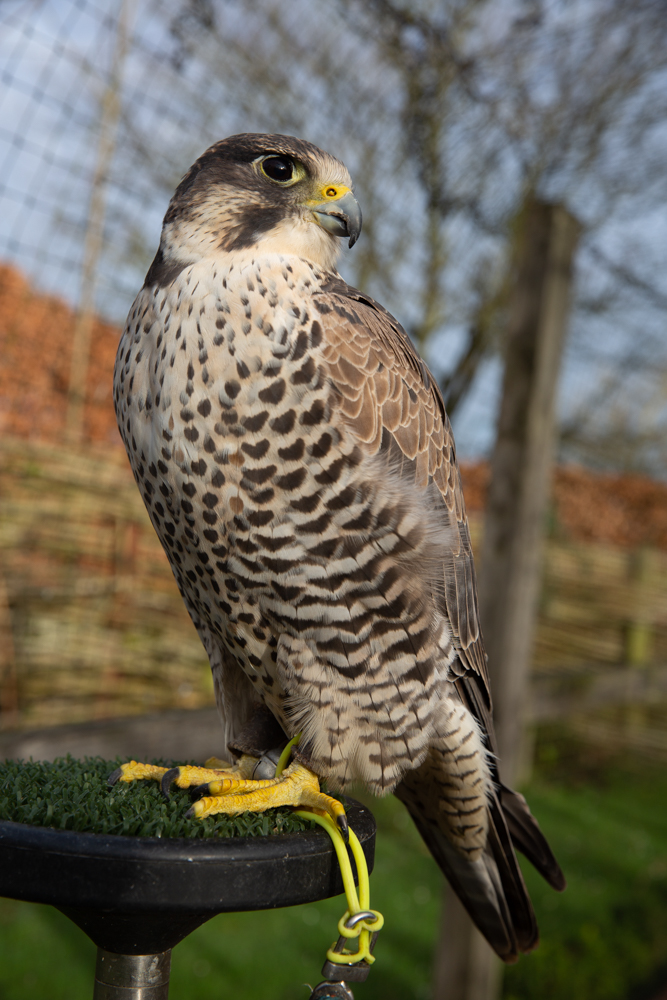 Damian with a Harris hawk

Damian with a Barn owl

The Peregrine, on the edge of extinction in Ireland in the 1960s has now recovered and over 400 breeding pairs are known.  A thrill to see them at such close quarters.  The fastest creature on the planet it can fly at 300km/hour as it dives from high above its objective, wings held close, striking and killing its prey, talons ready, with the sheer force of its impact.  On the other hand, the incredibly cute Barn owl is the most widespread bird known, being present on all continents (except Antarctica).  Yet ironically, it is threatened in Ireland as its habitat is progressively destroyed.

Falconry is one of the most ancient activities that man has engaged in, beginning, based on historical records, in ancient Mesopotamia over four and a half thousand years ago; but possibly up to 20,000 years old according to Damian.  Genghis Khan had 10,000 raptors.  One of the Pharaohs of Egypt was buried with 20,000 mummified birds. Falcons were widely depicted in Egyptian art and had profound religious significance. They were also used through medieval times to bring down pigeons, which might be carrying messages to the enemy.  Falconry has survived as a sport to present times and was favoured by the gentry and well-to-do.  Quite a few expressions and words from falconry have found their way into the English language – ‘wrapped round my little finger’,  ‘under the thumb’, ‘bated breath’, ‘hoodwinked’ are examples. Many of these came down to us through Shakespeare.

Such close encounters with these impressive and proud creatures was a special experience.   Damian chose Ophelia, a Harris hawk to accompany us on a walk through the castle grounds.  What a spectacular backdrop as we crossed the manicured lawns, strolled down tree-lined avenues, through ancient woods, past a temple erected to a racehorse, visited a hermit’s grotto and passed the beautiful lily pond. 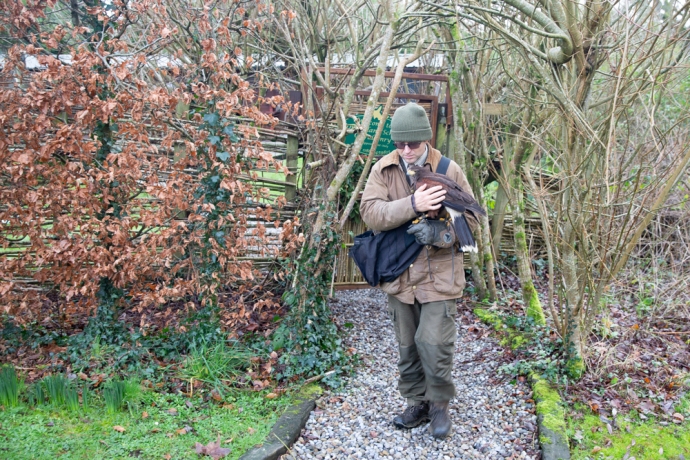 Taking Ophelia, a Harris hawk for a walk

Damian with Ophelia, Harris hawk and the castle as a backdrop 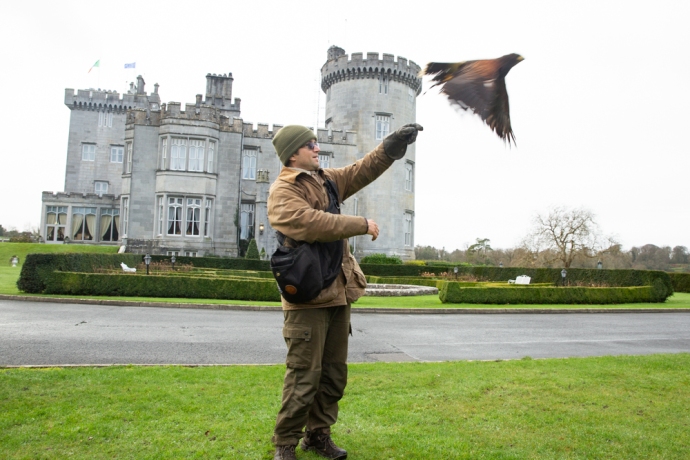 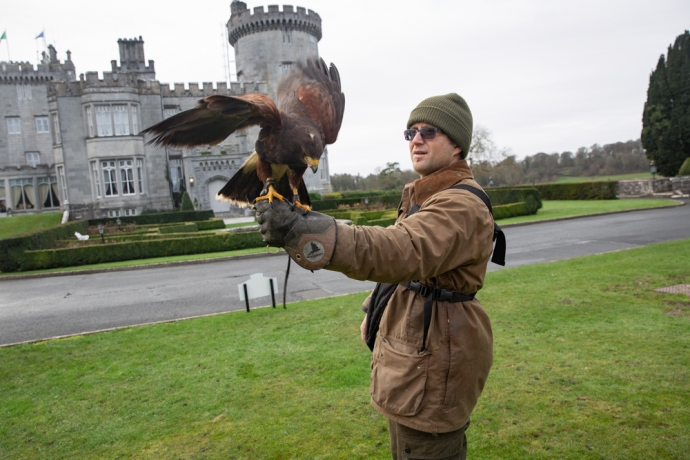 Temple of Mercury, erected in the 1700s by Baronet Sir Edward O’Brien. One of Sir Edward’s horses, Sean Buis, is buried underneath.  THe temple is designed so, from a distance, you only see four of the eight legs, so as to resemble a racehorse. 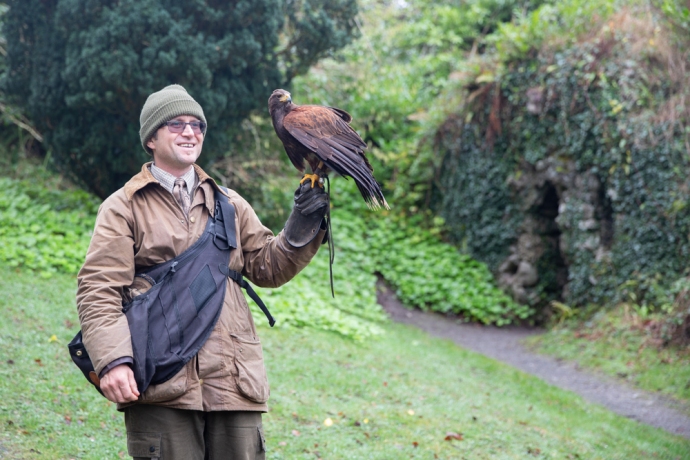 Damian and Ophelia, outside the Hermit’s Grotto.  This housed a ‘hermit’ employed by the Estate to live there for the entertainment of guests.  They were encouraged to dress like druids and were on display at all times.  One of the ‘worst jobs in history’. 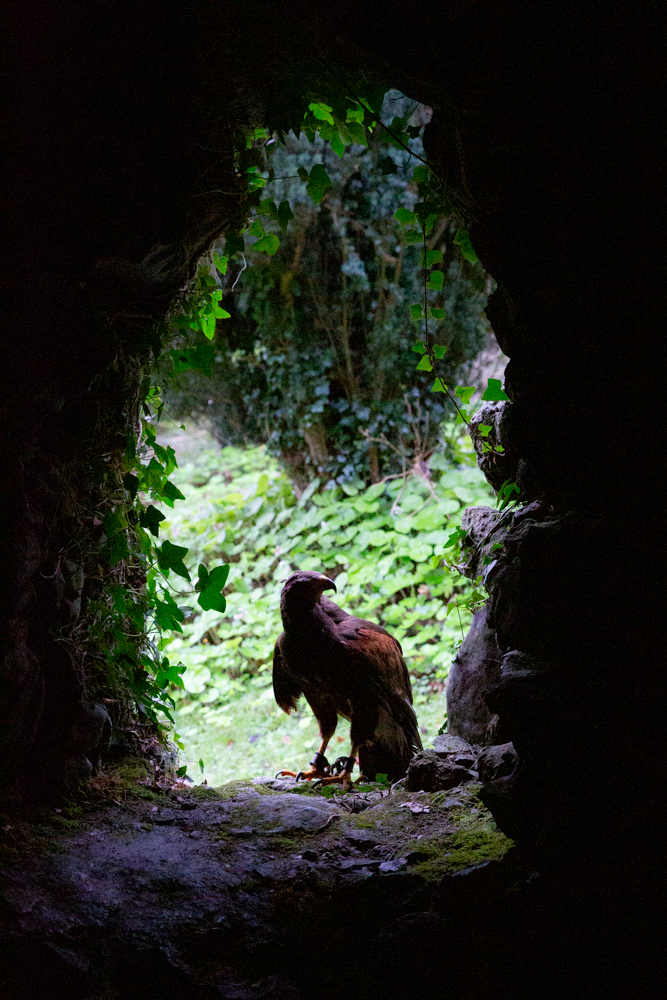 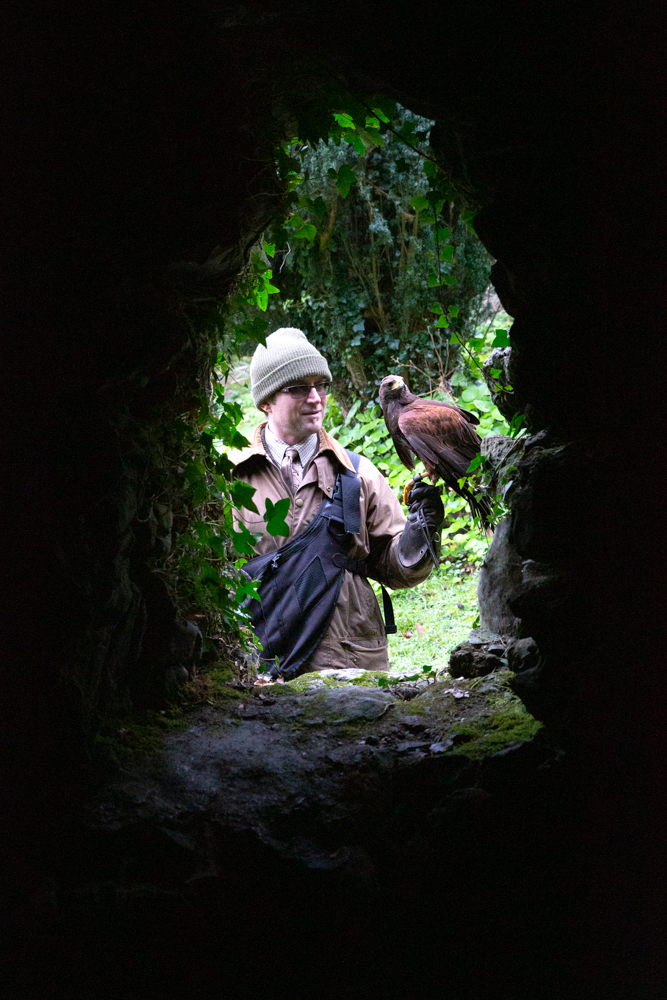 Sculpture by Carmel Doherty.  Perhaps she is playing the Hawk’s Hornpipe.

Ophelia could wander, if that’s the word, freely in the woods until a whistle would get her attention and she would return to the handler’s gloved fist.  Moving so swiftly, flying inches above the ground and swooping up at the last minute to land, claws outstretched and wings spread wide.  A real challenge for the photographer in me. 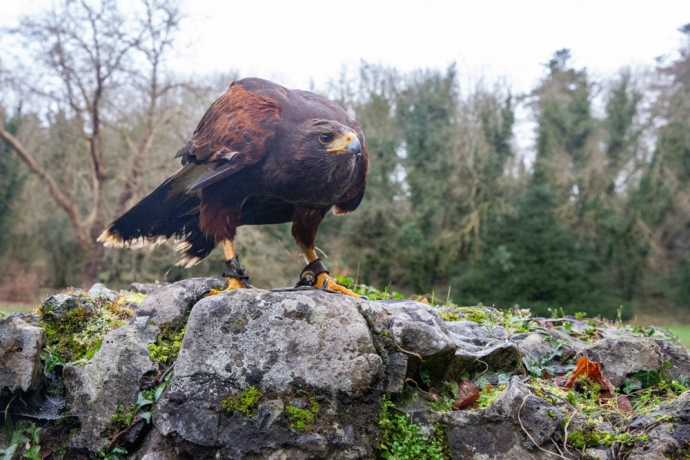 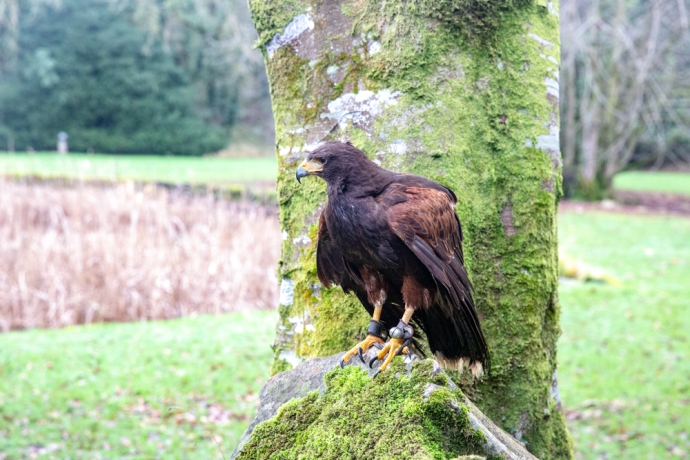 Damian let me have a go.  What a thrill to have her swoop in and land so delicately on my fist.    Thanks Damian for capturing me with the raptor so well on my camera. 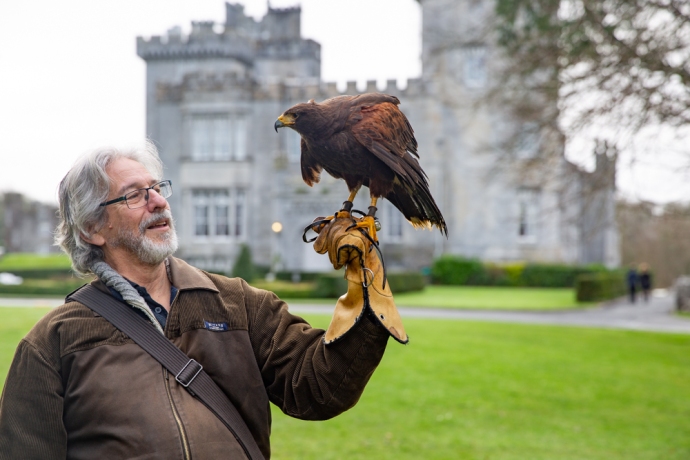 Now through Schools such as at Dromoland all of us can experience birds of prey at close quarters. Highly recommended.

2 thoughts on “The Raptors at Dromoland, Co Clare.”