Pet Emus? Where else but Ireland?

Ireland is full of surprises.

It’s late on a freezing cold March evening and I’m leaving the pretty West Cork town of Bantry on my way back to Clare, after spending the afternoon touring Sheep’s Head. I pick up a hitch-hiker, Sophie, heading to Kealkill about 10 km away. As this is on my way, no problem.  She asked to be dropped in the village saying she would get another lift from there. As there are many ways to get where you want to in Ireland, it wasn’t really out of my way so I offered to take her further.   Five kilometers on she asks to be dropped at at a lane. Now we were in the middle of nowhere.

On enquiry it turns out she lives “just a little way” down the boreen which she was going to walk.  I love the way when you give someone a lift in Ireland they just say “drop me here”, sometimes way short of their destination because they don’t want to inconvenience you further.  So 1½ km later we arrive!

Anyway, she was good company and during our short journey I heard all about her family’s move from the UK to 20 remote acres in West Cork, of her daily commute of three hours to Cork city for study and of her menagerie including some more slightly unconventional animals such as emus, a herd of forty pygmy goats and a ‘boer goat’ along with the more conventional dogs, cats, chooks and pigs.

A Boer Goat and some of the Pygmy Goats.

Pygmy goats. I had never heard of them before but it seems are becoming more popular as pets and they are seriously cute. Boer goats come from South Africa where they are usually reared for meat. They are a rather large lump of goat but I can see that some would find them perfect for a pet,  in the same way some people get attached to pigs. 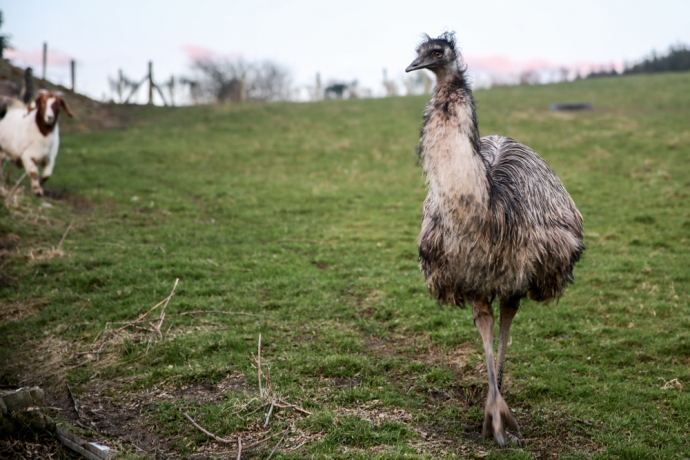 They are a wild flightless bird that roams the outback of Australia. The third largest behind the ostrich and cassowary,  and I have certainly never thought of them as pets. Just between you and me they have a bit of a reputation as being dumb. When you encounter their gangly form  on outback roads, as you often do, they show remarkable suicidal tendencies running parallel to your car until they find an opportunity to randomly veer directly into your path.

Canadian biologist Louis Lefebvre, when asked to name the world’s dumbest bird responded, “That would be the emu.”  Of course Australians reacted negatively to this criticism of its national bird from a country where its police force still rides on horses. Ha, Just kidding.  They, however, may not be as dumb as we think.  In 1932 the Army were called in to cull 20,000 emus that were destroying crops in Western Australia.  Armed with two Lewis guns and 10,000 bullets they were embarrassingly defeated, retreating after killing only a few hundred birds.  The birds seemed to have an innate understanding of guerrilla tactics, continually splitting into small groups and chaotically running off in different directions.  And their tough hide also proved  remarkably resistant to bullets.

They are however insanely curious.  I remember encountering a flock. somewhere in the far west of NSW, which I observed from a distance.  They didn’t run away; just watched me.  I slowly wound down the window and started rustling a packet of chips (crisps, I think you call them).  Almost immediately they came over to the point where one was brave enough to try and grab the colourful packet through the window.

But hey.  Pets?  I have never met anyone, even in Australia, who had a pet emu. Just not ever on my radar. Sophie was happy for me to have a look at her Irish versions of the Emu.

They were very friendly and came running over to greet us.  I should say friendly to people and seemingly also goats but they hated dogs, chasing them wildly around the paddock.

Darkness arrived and I had to head off but I was left with the slightly discomfiting image of  emus, tall and proud surrounded with green  rolling green hills and not a eucalypt in sight.

4 thoughts on “Pet Emus? Where else but Ireland?”